'The Hobbit: The Desolation Of Smaug' Movie Review 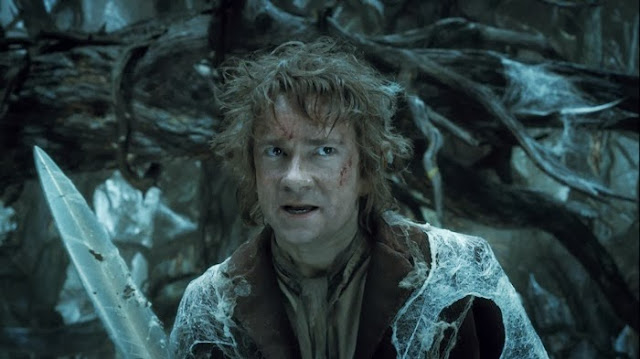 When the “Lord of the Rings” movies dropped, people got crazy pumped for the release of the extended editions. A year from now, when the last of Peter Jackson’s three “Hobbit” movies has come and gone, I’m excited for someone to splice them together, hack out all the superfluous crap, and finally reveal the single good movie that I know is hidden in there somewhere. It should be about three hours long. What we’ve seen thus far, including the latest, “The Hobbit: The Desolation of Smaug,” has been nothing but a disappointment. Overlong, bloated, and tedious, Jackson even did something that I’d have thought impossible, he made a giant, fire-breathing dragon voiced by Benedict Cumberbatch boring as shit.

For a movie called “The Hobbit” there is little woefully little seen of the diminutive hero. Bilbo (Martin Freeman) is always around, but only as a background character, a member of the chorus. Only when his travelling company finally meets the dragon does he take center stage, and even then he’s only there as long as he has to be. The focus of “The Desolation of Smaug” is the dwarves’ mission to retake their lost kingdom. This all sounds, promising, right? Quests, adventure, dragons, wizards, orcs, prophecies, battles, and all manner of fun. It doesn’t sound like that even could go wrong, but oh boy does it ever.

The problem with following the dwarves is that they have no personality. Each one has a bunch of wacky facial hair, but most of them barely have names, only there to fill space and provide comic relief. With Bilbo’s story pushed to the side, Thorin Oakenshield (Richard Armitage) becomes the de facto protagonist, but his blind ambition and singular tunnel vision makes him so goddamned dull that you have no interest in his exploits. Add to this that he’s a complete and total asshole, and you’re left without anyone to root for. Greedy, hungry for power and glory, and proud to a fault—he’d rather that he and his friends rot in a dungeon than do a mutual favor for Thranduil (Lee Pace) because of a tedious melodramatic blood feud between dwarves and elves—you don’t want him to succeed because he’s such a dick.

Jackson buries all narrative momentum under mounds of useless asides. The pace is all over, up and down with little or no transition scene to scene. Just when things begin to move along at a steady clip, “Smaug” drives head first into a tree. You don’t give a damn about things like the inner political turmoil of Lake Town, especially not when you can see the finish line. There are multiple awkward romantic threads that involve the elf warrior Tauriel (Evangeline Lily)—a character who is made the fuck up as filler, by the way—that leave you making a face like a confused dog. Is she really going to bang a mullet-wearing dwarf? “The Desolation of Smaug” is 161-minutes long, and you slog through every single one, wishing Jackson had paid more attention to the flow of the story than with trying to wow you with his visual prowess. He’s far more concerned with what Mirkwood Forrest looks like than with giving you anyone to cheer for.

It’s like Jackson stopped caring about story and character. Isn’t the point of adapting a book you supposedly love because of the story? Originally, he wasn’t supposed to direct these movies, so maybe he really doesn’t give a damn. If “Smaug” is an indication, he’s more interested in playing with huge CGI set pieces, and staging one of most elaborate, nonsensical, pointless climaxes in cinema, than establishing a coherent narrative or creating actual characters. When the dwarves battle Smaug in the heart of the Lonely Mountain, it’s like watching someone play a video game. You maneuver your little avatar to one side of the room to flip that lever, then you start this big wheel spinning, which starts the furnaces heating the gold, and on and on. And when you finally get all the switches flipped the right way, then you can unleash the fancy weapon against the big boss of your level.

Except that it doesn’t mean anything. All of this effort, all of these hoops the characters jump through, amount to absolutely nothing. All it does is take up time. “Desolation of Smaug,” the middle of the trilogy, aims to be the “Empire Strikes Back” of the trio. The end is dark, the ultimate fate of the heroes is unclear, and everything is just kind of shitty. But their attempts to leave you hanging fail miserably. When the movie concludes, all you can do is throw up your hands, turn to the person next to you, and ask, “what was the point of all that?”

Even the best parts of “The Desolation of Smaug” don’t stand out. There are a few nice action scenes, including a running battle between orcs, elves, and dwarves along a river, but they’re never more okay. You can’t escape the fact that you’ve seen this all done bigger and, more importantly, better in every chapter of the “Lord of the Rings.” One improvement this installment makes over the previous entry is that the action largely avoids the gimmicks of the first film. You get some, like an implausible—and we’re talking implausible in a world of wizards and magic—barrel roll, and feats of balance that push even the bounds of what you know Legolas (Orlando Bloom) is capable of.

You could forgive almost all of the problems in “The Hobbit: The Desolation of Smaug” if there was a single character to care about, or even know, but there’s no one. The film is a series of guys dressed up in elaborate costumes running around, narrowly cheating death, and it’s insanely frustrating that the film never amounts to anything more than that.
Posted by Brent McKnight at 9:28 PM