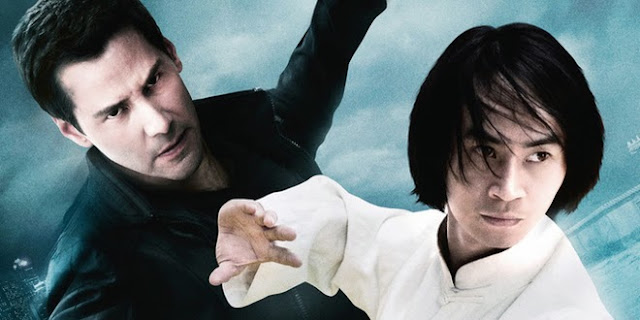 Actors directing movies is a dicey proposition, at best. For every Ben Affleck or Clint Eastwood, who turn in some of the best work of their career behind the camera, you get Nicolas Cage directing “Sonny,” or Madonna forcing “W.E.” upon the world. So when we heard that Ted “Theodore” Logan himself, Keanu Reeves was going to helm a martial arts actioner, the news left us puzzled. But you know what, his first directorial effort, “Man of Tai Chi,” which just hit Blu-ray and DVD, is a damn good time, and delivers everything you want out of this type of movie.

The plot is a super generic yarn about a young, brash Tai Chi student, Tiger Chen, played by a guy named Tiger Chen—with a name that awesome, why go with anything else? He’s the last in his master’s line and wants to show the world that Tai Chi can be badass, too, much to his wise old master’s chagrin. He’s a good kid, but starts down a dark path of greed, glory, and underground fighting for a mysterious figure, Donaka Mark (Reeves). Mark is a vague sort of wealthy businessman who occasionally wears a creepy mask for no reason and says ludicrously ominous things like, “He has it in him,” and “You owe me a life.” He’s so overly serious that he’s both funny and sinister, and Reeves embraces both sides, cheese and all.

Of course there’s a girl along Tiger’s spiritual journey towards redemption, as well as the one-honest-cop trying to bring Mark to justice, but the plot serves one purpose, and one purpose only, to propel you from fight scene to fight scene. For the most part, Reeves’ style is unobtrusive, but there is one thing that he does that really makes “Man of Tai Chi.” He assembled a cast of actors that actually know how to fight, that are skilled martial artists, and he has the good sense to stand back and let them fight. You’d think that would be an intuitive move, but all too often you pick up a modern action movie where the fight sequences are so hacked to shit that you can barely tell what’s going. All you see is a hodgepodge of disembodied fists and feet juxtaposed against reaction shots of people being hit in the face.

Reeves worked with legendary fight choreographer Yuen Woo-ping, the man behind the action in the likes of “Kill Bill,” “The Matrix,” and countless other incredible films, and he gives these scenes the space they require. I don’t know about you, but when I watch a movie about dudes fighting, and that’s exactly what “Man of Tai Chi” is, I want to actually see them fight. These are people who have spent years honing their skills, and only ever showing that in a tight, constricted close ups, does the performers, and the movie, a huge disservice. The fight scenes—whether showing Chen compete in a sanctioned, rule-heavy tournament, or engaged in a life or death struggle for the amusement of the bored and rich—are fantastic, and as the film escalates and progresses, so does content of the combat. “Man of Tai Chi” may be worth it alone just to see Chen face off with Iko Uwais (“The Raid: Redemption”).

You do get a couple of questionable wire work choices—like a little guy in a satin outfit pretending to climb up a pillar—and there is a god awful CGI car crash that looks like something out of a “Sharknado” rip off. But the fights are what sells “Man of Tai Chi.” The story and setting are updated, there’s a throbbing modern rock score, and the overall aesthetic is slick, but what Reeves and company have turned out here is a kick ass B-grade martial arts movie.

Reeves is a huge movie star, one with the clout to make whatever movie he wanted, and I love the fact that this is what he chose to make. He’s not trolling for awards, he’s not looking for critical acclaim, and the fact that most of the movie is subtitled automatically disqualified it from being a box office success in the US—after a festival run, there was a very limited theatrical release, one that you probably didn’t notice. He set out to make a kick ass martial arts movie because that’s what he wanted to make, and you know what, he made a kick ass martial arts movie. “Man of Tai Chi” won’t blow your mind, but it is a well put together piece of fun for fans of old school martial arts cinema. Hong Kong action heads will also appreciate touches like Simon Yam popping up as a police chief and Karen Mok as the crusading cop.

The “Man of Tai Chi” Blu-ray/DVD comes with a commentary track from Reeves and Chen, as well as a making-of feature that digs into the production. You probably won’t need to run right out and buy this release, but it’s definitely worth plunking down a couple buck on a rental, or giving it a slot on your Netflix queue.
Posted by Brent McKnight at 9:46 PM