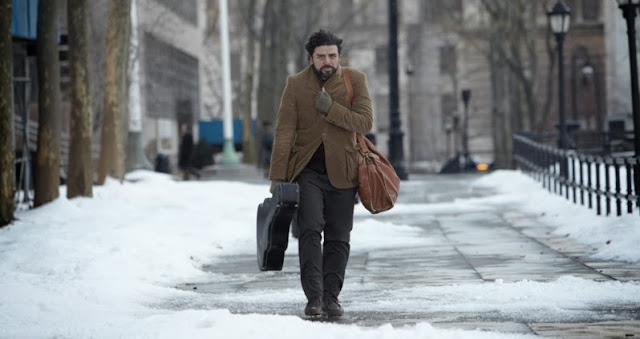 Llewyn Davis (Oscar Isaac) is a special kind of asshole. He’ll borrow money from you to pay for your girlfriend’s abortion, your girlfriend that he knocked up. That’s assuming that you are in fact Justin Timberlake and you’re dating Carey Mulligan, but you get the idea. He’s also the protagonist of the Coen Brothers’ latest film, “Inside Llewyn Davis,” and the greatest feat the “True Grit” filmmakers accomplish is making you sympathize with this miserable, miserable prick as they delve deep into his psyche.

Fighting to make a name and a living in the early 1960s folk scene, Llewyn bounces from couch to couch—friends, family, vague acquaintances—using up any and all good will he somehow accrued. Frustration builds as he watches empty, watered down pap fill clubs on the way to becoming hits, and hacks climb towards stardom. His songs, the ones he bleeds himself into, on the other hand, can’t even buy him a winter coat to stave off the biting New York cold.

As both a musician and a person, Llewyn is a piece of something bigger than himself. His solo career isn’t heading anywhere, and all of his best songs, his greatest achievements, came as one part of a duo. He hasn’t been the same since striking out on his own, and when you learn that his partner, Michael, didn’t just leave the partnership, he threw himself off the George Washington Bridge, you begin to understand exactly why everyone gives Llewyn the leeway they do. He’s a bastard, but he’s also broken, a fragment of his former self, and given this space, he wallows in his bitterness and misery.

Not always the easiest character to root for, underneath his off-putting exterior, Llewyn remains a passionate musician and a dreamer at heart. He wants something greater, a grand, meaningful life. Nothing frightens him more than the prospect of being ordinary, of simply moving through the world unnoticed, just existing. In the person of his father, a former merchant marine, now near catatonic in a nursing home after a life of hard labor, he sees the end result of that road, and he’ll only go down that path kicking and screaming.

You can’t help but read the Coens, who have always worked as a two-headed movie-making monster, into this scenario. There’s a distinct impression that “Inside Llewyn Davis” is, at least in part, an attempt by the brothers to imagine life without the other, both personally and professionally. Just like it is hard to imagine the members of this duo going solo, Llewyn faces a similar conundrum. He knows how good he was with Michael. By all accounts they had something magic, and he doubts he can ever be that good again. That knowledge, that desperation weighs on him, until even the mention of Michael is so painful and crushing that all he can do is lash out. An in depth character study, Isaac walks between caustic and warm and heartbreaking, and delivers one of the most complete, powerful performances of the year.

Music obviously plays in important role in the film, but the total package of “Inside Llewyn Davis” captures a unique moment in American popular culture. Set just before the Greenwich Village folk scene exploded into the national spotlight, the score and soundtrack, arranged by T-Bone Burnett, creates such an authentic atmosphere that you feel like you’re right there as Llewyn numbs himself and heckles other performers. Not entirely a comedy, the film is funny in a dark way, not to mention at the most inopportune times.

This definitely falls on the more serious of the Coen Brothers’ body of work. There are moments when their trademark quirkiness surfaces, like a random guy who only shows up to stare down Llewyn on the subway, and a cat that forms an integral piece of the plot. This is less overt madness than something like “O Brother Where Art Thou?” or “The Big Lebowski.” The closest “Inside Llewyn Davis” comes to that is a dreamlike road trip with a junkie jazz head played by John Goodman and his near-mute, proto-Kerouac manservant Johnny Five (Garrett Hedlund).

“Inside Llewyn Davis” doesn’t overwhelm you at first. The film has such a perfect, natural flow that you don’t quite notice how it sticks to your ribs. A few days later you realize that you haven’t stopped thinking about it, that you’ve been carrying it around with you ever since.