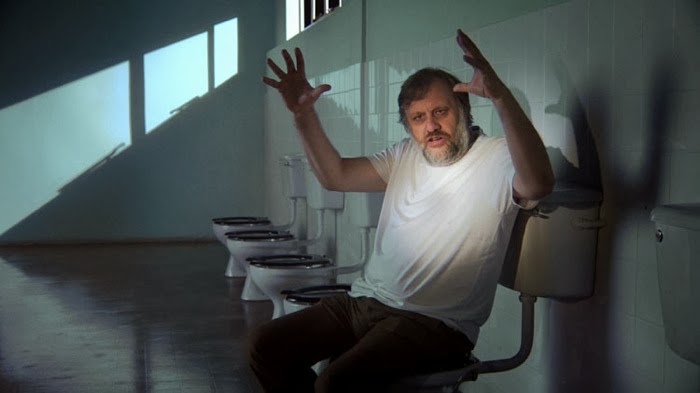 I could listen to Slavoj Zizek, the Slovenian psychoanalyst, radical philosopher, and movie nut, talk for hours, especially where movies are concerned. Granted, I only understand a fraction of his animated tirades, but his ability to deconstruct cinema, tying individual works to our collective psyches and larger political and cultural constructs, is nothing short of fascinating. That’s exactly what you got in The Pervert’s Guide to Cinema, and in the follow-up, The Pervert’s Guide to Ideology, now on Blu-ray and DVD.

While Cinema is an explicit examination of, you guessed it, cinema, Ideology sets Zizek’s sharp cultural criticism on what he calls the “trashcan of ideology,” or the twisted mass of humanity’s belief systems. Again, he uses his popular films to illustrate his points, and again, he and director Sophie Fiennes—sister of Ralph and Joseph—attempt to place him inside the films, staging his running narrative in various actual locations or recreations of iconic sets.

Part of what makes Zizek so compelling to watch is that he comes across like some guy you’d encounter at a local watering hole, like he’s court at a bar and has everyone’s attention. He’s affable, animated, and even seems like he has a touch of the sniffles throughout his dialogue. His sprawling, abstract web of ideas, drawing from the likes of Jacques Lacan and Karl Marx, among others, isn’t always the easiest to follow, but the man is never, ever dull. Missing so much also gives this movie a ton of rewatch appeal, allowing you to key in on different elements with subsequent viewings.

Starting with John Carpenter’s They Live, a “forgotten masterpiece of the Hollywood left,” and working through films like West Side Story, The Sound of Music, and A Clockwork Orange, Zizek dissects our concerns, beliefs, and behaviors. Any movie that starts off with a discussion of They Live already has a leg up in my mind, and the rest of the movies he uses aren’t bad either.

Jaws is a simplified conglomeration of all of our collective fears and anxieties. Taxi Driver is a short step away from U.S. military involvement across the globe—the goal begins as a desire to help, without asking or caring if the parties involved actually want that help or not. Starbucks, in the most perfect device of commodity driven capitalism, offers customers a way to consume, and assuage their guilt over their consumption by donating a miniscule amount of their profits to one cause or another. In James Cameron’s Titanic, the iceberg that cause the tragic sinking of the unsinkable ship prevented another, in Zizek’s opinion, greater tragedy, the inevitable discovery that Jack and Rose realized that they had no real connection, and the painful dissolution of their relationship. That is, after a copious amount of sex.

Through connections and interpretations like these, as well as many others, Zizek uses film to shine a light on the machinations of how ideology works, in both our individual lives and the larger culture. Cinema is a perfect tool for him to illustrate his points because they, like our daily lives, are full of the structures, institutions, and, yes, ideologies that infuse society, even as they guide our lives they pass largely unnoticed.

While Zizek and Fiennes’ first collaboration explicitly deals with cinema, Ideology brings in current events like the violent riots in London, killing sprees, and even German metal band Rammstein’s subversive use of pseudo-fascist imagery. Movies provide the framework, but from there he branches out wherever his mind takes him. The forces that drive the world around us, though they exist out in the open, function like an unseen hand, manipulating our behaviors and institutions, much like the hidden messages that Rowdy Roddy Piper discovers in They Live.

The DVD of Pervert’s Guide only comes with one extra, but it’s a solid offering in the form of a 28-minute question and answer session with Zizek and Fiennes. In a live setting, he is even more bouncy, energetic, and engaging. If you can get past the fact that this looks like is was filmed by some high school kid for his AV class midterm—and if you liked the content of the actual movie—then you’ll derive a fair amount of enjoyment out of this bonus feature.
Posted by Brent McKnight at 8:32 PM