'Exodus: Gods And Kings' Movie Review: Full Of Ambition With Little Interest In The Human Element 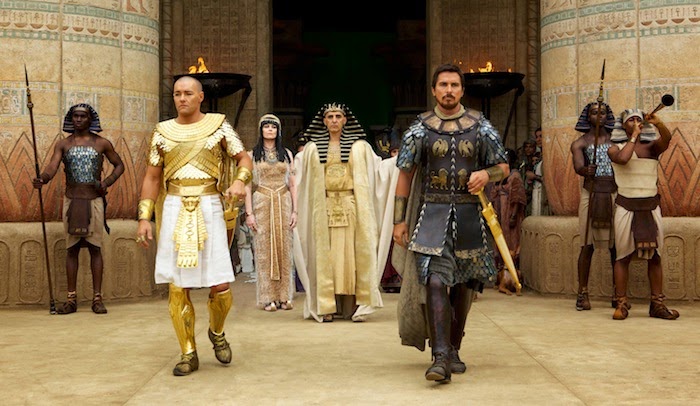 With Exodus: Gods and Kings, Ridley Scott set out to create a throwback to the biblical swords-and-sandals epics of yesteryear. He even goes so far as to shoot day-for-night and to use white guys awkwardly painted to look like people from the Middle East. What he succeeds in delivering is a jumbled mess that starts fast and bogs down almost immediately for the entirely of its 149-minute run time. We’re talking about a shockingly dull mess, especially for a movie that bills itself as a massive action extravaganza. It’s a movie with grand ambition, minimal follow through, and little interest in the human component.

The white washing has been a big issue ever since the cast was announced. Joel Edgerton, a very pale Australian, plays the Egyptian Pharaoh Ramses. (Throughout the entire movie I couldn’t stop thinking, “Rameses niblick the third kerplunk, kerplunk, whoops, where’s my thrible?” from Red Dwarf, but that’s probably just me.) He’s basically painted a weird shade of orange, augmented by thick eyeliner, but still doesn’t look even a fraction as awkward as Ben Mendelsohn’s shady, corrupt viceroy character. Those two look really, really strange and out of place. Christian Bale plays Moses, who you may recall from the Bible is a Hebrew character, and his make up basically just makes him look like he has a spray tan.

Scott has said, publicly and often, this approach was all due to budget concerns, choosing the poor phrasing so say that he couldn’t produce a movie this massive scale starring “Mohammad so-and-so from such-and-such.” He probably wishes he gave that statement some more thought before blurting it out. Overall, this situation gives the whole film a weird, I’m not going to lie, gross feel, similar to watching old westerns where guys like Charlton Heston play Native American chiefs under in what is essentially blackface. That’s all I’m going to say about that here, it’s been dealt with lots of other places by folks who are way more intelligent and insightful than I am. And if you can get past this, which going to be a big if for a lot of people, the movie itself is a substantial a train wreck in many other regards.

You know the story. After hundreds of years of slavery, Moses, directed by God, stands up to Ramses and leads his people to freedom. They complicate it exponentially, playing up the Moses-doesn’t-know-his-origins story, and setting the two men up as pseudo brothers. The biggest problems with these elements is that the first is never developed in any way that gives it meaning beyond being a plot point, while the second carries no emotional weight and never pays off. Outside of a few pleasant moments near the beginning, you have no investment in the relationship between Moses and Ramses. Unfortunately for Exodus, it puts a lot of stock in this and reaps no rewards. At his best, Scott is able to give personal import to large-scale stories, but he feels disinterested in the human element here, and there is nothing to relate to.

A big battle kicks things off, but the action is a muddle of lightning fast edits, shaky camera work, herky-jerky movement, and is bland and uninspired. Most of the spectacle level elements in the film fall into this category. From there, you skip forward, barely dipping below the surface details, covering huge swaths of time, often years, in a few scant moments. For example, within a couple minutes of screen time, Moses is banished, attacked, meets a nice looking lady with face tattoos, gets married, has a kid who grows up, becomes a farmer, talks to God in the form of a burning bush, and then heads back to Egypt to see what’s what. Leaving his family is supposed to be a big emotional beat, but you’ve spent so little time there that you don’t give a rat’s ass and his subsequent internal back and forth rings false. 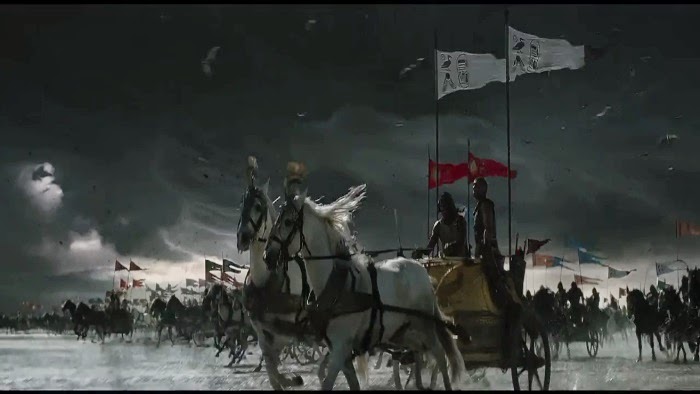 This is an incredibly dull way to move through a film, when you don’t care a lick what happens to anyone. There is a stretch in the middle, however, where God unleashes the biblical plagues upon Egypt where things get nutty and inspired and start to look for a time. It’s hard not to get at least a little psyched as a swarm of crocodiles go feeding frenzy crazy on the populace, or when frogs take over an entire city. Things get appropriately loopy, but they’re more weird and strange than they are terrifying or intimidating. At least until you get to the smiting of Egypt’s children, which is brutal and, along with rampant, graphic animal sacrifice, makes you wonder how the hell this movie scored a PG-13 rating.

But this momentary craziness, by far the most enjoyable, engaging stretch of the overlong movies—it’s impressive it’s so long considering nothing is handled in any depth—recedes into the background in short order, returning you to monotony. The film never builds to anything, the massive set pieces are devoid of tension, and when Scott tacks on a Lord of the Rings-esque epilogue, Exodus just sort of trails off into the credits.

Back to God for a minute. Moses’ self doubt as this God he just discovered for the first time puts him through his paces, provides the meatiest parts for Bale to play with, and there are moments when it hits, even though he decided to use his Batman voice more than is necessary. But it’s the actual portrayal of God that is going to piss some people off. This might be a spoiler, but I hope that none of you will actually pay money to see this movie, so maybe it won’t be an issue.

God is a petulant child. Very literally a kid. A young British boy to be precise. He’s played as a total spoiled brat, like a youngster who breaks his toys when he doesn’t get his way and when people don’t listen to him. And it’s with the cruelty of a child that he batters and bludgeons Ramses and his people. For his part, Edgerton is just basically present to react to these plagues and look confused. It’s s a really weird choice, one that recurs throughout. If I were a Christian, which I am decidedly not, it would be insulting as hell to see your divine figure depicted as a mean-spirited, irrational, ill-tempered little bastard, which is what you get in Gods and Kings.

This is simply another in a long line questionable choices that Scott makes in this movie. From the very beginning, Exodus is a film awash in this sort of dubious logic and these problematic decisions, which includes playing the score a deafening levels. It’s not a well told story, the pace is all over the map, and aside from a moment in the middle where it loses its damn mind, there’s nothing much to cling to in Gods and Kings.

For all it’s other problems, perhaps Exodus’ greatest sin is its complete squandering of Sigourney Weaver, who oddly enough, aside from some eyeliner, is hardly painted at all. It’s not even underuse or misuse, just no use. She plays Tuya, Ramses mother. When you first see her, you’re like, “Rad, Sigourney Weaver,” but as it gradually dawns on you that they’re not going to let her do a damn thing—she has almost no lines—that enthusiasm dampens and you lose all hope. [Grade: D+/C-]

Posted by Brent McKnight at 2:53 PM