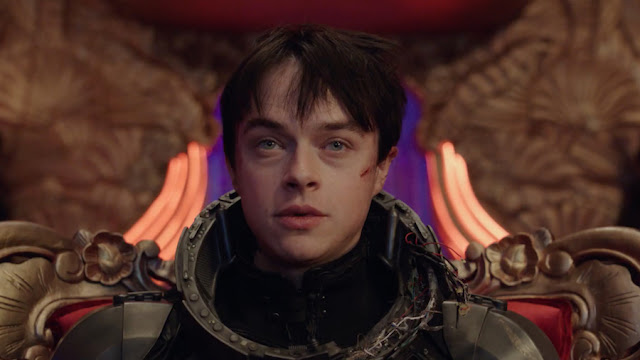 I don’t even know where to begin with this thing. All I can say is that, hell yes, Valerian and the City of a Thousand Planets looks every bit the absurd, magical, completely bat-shit insane sci-fi spectacle I hoped Luc Besson, that delightful weirdo, would deliver. This is some bright, festive, manic nonsense, and I love every second of it, even the groan-inducing, “Time flies when you’re having fun,” line. Let’s just hope it avoids the pitfalls of Jupiter Ascending and is actually nuts instead of just sucking.

I’m not even going to try to understand what this is about, nor do I care. All I want is to see this eyeball-scorching, candy-colored mind-fuck blasted across the biggest screen I can find as soon as humanly possible. Here’s a synopsis for those interested in such things:

Valerian (Dane DeHaan) and Laureline (Cara Delevingne) are special operatives for the government of the human territories charged with maintaining order throughout the universe. Valerian has more in mind than a professional relationship with his partner- blatantly chasing after her with propositions of romance. But his extensive history with women, and her traditional values, drive Laureline to continuously rebuff him.

Under directive from their Commander (Clive Owen), Valerian and Laureline embark on a mission to the breathtaking intergalactic city of Alpha, an ever-expanding metropolis comprised of thousands of different species from all four corners of the universe. Alpha’s seventeen million inhabitants have converged over time- uniting their talents, technology and resources for the betterment of all. Unfortunately, not everyone on Alpha shares in these same objectives; in fact, unseen forces are at work, placing our race in great danger.

My only worry about this is that it will devolve into a CGI nightmare, but for now, good lord I’m excited.