This 'The Void' Trailer May Warp Your Fragile Little Mind Horror has been strong so far this year, what with Get Out, The Girl with All the Gifts, Split, and more hitting the airwaves, and it’s only going to get better. The Void has been on our radar since Fantastic Fest, and as it creeps ever closer to release, there’s a new domestic trailer to warp your fragile little mind.

Though it boasts a producer from TheWitch, The Void looks like something very different. (And to be fair, it could also list producers of TheRaid, Lords of Salem, Timecrimes, Jiro Dreams of Sushi, Portal to Hell, and many other disparate titles if so inclined.) And it looks like something completely unhinged and rad, like the bastard child of John Carpenter.

I’m not even sure where to start with The Void. This trailer's a mashup of every great ‘80s horror, sci-fi, demon possession, and cult element, the mixture is just delightful. It’s got an ominous synth score, creepy figures cloaked in sheets, mysterious symbols, a dude with an ax, shrieking, screaming, gore, and all the wonderful waking nightmare elements I look for in a movie. This makes me want to giggle I’m so excited.

Here the official synopsis for The Void, but it only hints at the mayhem of this trailer.

When police officer Carter (Aaron Poole) discovers a blood-soaked man limping down a deserted road, he rushes him to a local hospital with a barebones, night shift staff. As cloaked, cult-like figures surround the building, the patients and staff inside start to turn ravenously insane. Trying to protect the survivors, Carter leads them into the depths of the hospital where they discover a gateway to immense evil.

And here’s a short U.K. teaser that dropped last month and may also break your brain.

Written and directed by Jeremy Gillespie, who worked in the art department for the likes of Pacific Rim and SuicideSquad, and Steven Kostanski, who helmed Manborg, The Void stars Kathleen Munroe (Resurrection), Ellen Wong (Scott Pilgrim vs. the World), Kenneth Welsh (The Exorcism of Emily Rose), Aaron Poole (Forsaken), and more.

The Void hits theaters and VOD on April 7, prepare thyself. 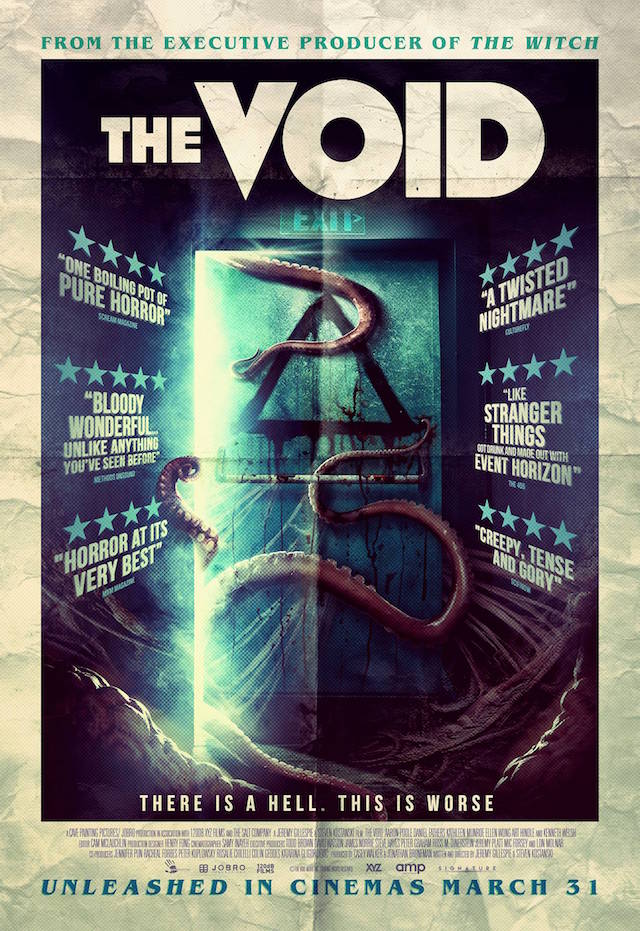