'The Predator' Trailer Poses A Threat 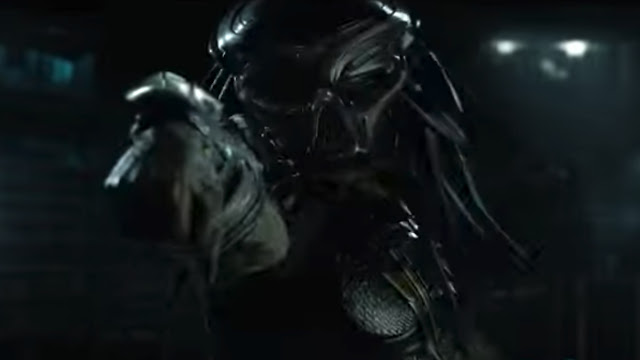 He didn’t write John McTiernan’s 1987 Predator, but Shane Black appeared in the film. In the years since, he’s become a celebrated writer and director in his own right. And now he’s back to try to breathe some new life into the franchise with The Predator. 20th Century Fox just released the first trailer for the sci-fi actioner. Check it out below.

I’m understandably pretty jacked up about The Predator. Nothing’s going to change that. Not the reports that the final act had to be almost completely rewritten and reshot or the fact that I don’t really like this trailer.

Granted, it’s a trailer, and the first one to boot. But the whole thing hinges on a kid randomly picking up a box of Predator gear that just happens to be laying around? What snippets of dialogue we get feel like stock bro-y Shane Black quips. (“He saw something.” “Oh yeah.” Really?)

But the action looks good. And the Predator has what looks like the Glaive from Krull, and I can hang with that. And this is the perfect format for Black’s trademark chest thumping bravado. And it still has an insane cast of Boyd Holbrook, Jake Busey, Edward James Olmos, Sterling K. Brown, Olivia Munn, Alfie Allen, Yvonne Strahovski, Thomas Jane, Jacob Tremblay, Trevante Rhodes, and Keegan-Michael Key. And Black teamed with Fred Dekker on the script. So there’s all of that. Which is why I’m excited for The Predator in the first place.

The action reportedly takes place after Predator and Predator 2, but before Nimrod Antal’s Predators, which I like more than most people. Make of that what you will. Here’s the official synopsis:

From the outer reaches of space to the small-town streets of suburbia, the hunt comes home in Shane Black’s explosive reinvention of the Predator series. Now, the universe’s most lethal hunters are stronger, smarter and deadlier than ever before, having genetically upgraded themselves with DNA from other species. When a young boy accidentally triggers their return to Earth, only a ragtag crew of ex-soldiers and a disgruntled science teacher can prevent the end of the human race.

The Predator invades theaters September 14. I may or may not dress up like the titular alien on opening night. We’ll see. And I still have my fingers crossed for an Arnold Schwarzenegger cameo.
Posted by Brent McKnight at 7:13 AM