'A Beautiful Day In The Neighborhood' (2019) Movie Review 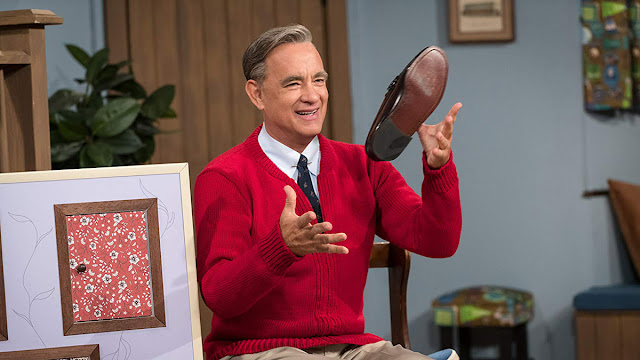 When you make a movie about a regular, everyday person who encounters a fascinating, larger-than-life individual—especially one based on a real-life icon—and that interesting person isn’t the main character, you run the risk of your protagonist fading into the background, being nowhere near as engaging as this secondary character, and the audience not giving a shit about the central figure in your narrative.

That’s a long, winding sentence, but it accurately sums up Marielle Heller’s A Beautiful Day in the Neighborhood. The film offers a fictionalized account of the encounter and subsequent friendship between journalist Tom Junod—Lloyd Vogel (Matthew Rhys) in the film—and Mr. Rogers (Tom Hanks). The scenes with Mr. Rogers are transcendent—warm and human and hopeful, and they embody values and outlook the man and his show stood and continue to stand for. Everything that isn’t that? Dull as pile of particularly boring, especially uninteresting bricks. 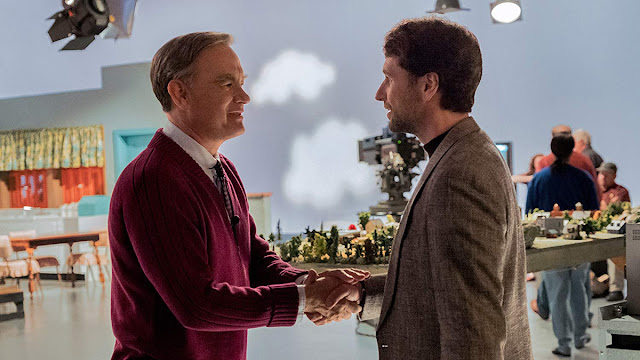 Yes, the story is based on a real situation and real people, but the story as told is rote and toothless and bland. Rhys is a great actor, he’s phenomenal in the entire run of The Americans, and he does what he can here. But the way A Beautiful Day presents Vogel, he’s one of the most aggravating movie types. He’s a cranky, moody character who treats everyone around him like garbage. Intended to be damaged and complicated, he’s mostly just a dick. He relies on the infinite patience of a woman, in this case his wife (Susan Kelechi Watson), who tolerates him for some reason, even though she’s going through her own shit, dealing with a newborn baby. She doesn’t need a bratty, infantile husband who continually abandons her for his job.

It’s painfully obvious where the story wants to go—he’s going to learn an important to be a better husband, father, son, and man. It’s not only predictable and tedious, when Mr. Rogers is absent from the story, all you want is to be back with him. Heller depicts Mr. Rogers as an almost magical, mythological figure; he’s not so much a person as a shining beam of light in the darkness. Hanks gives as good a performance as you might expect—I can’t envision any other actor being able to play this part with such earnest kindness. He represents all that is good in the world, which makes Vogel even less interesting in comparison. It’s like how Green Book focuses on the racist driver rather than Don Shirley. And it’s equally misguided.

[Related Reading: 'Can You Ever Forgive Me?' Movie Review] 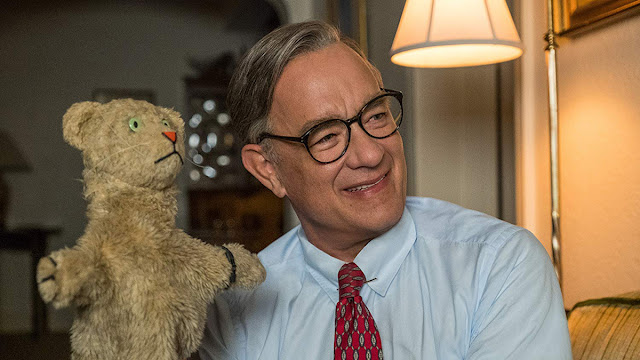 This is frustrating because the scenes with Mr. Rogers in A Beautiful Day in the Neighborhood are some of my favorites in any movie I’ve seen this year, but the rest is hollow, generic tripe I couldn’t care less about. We see what could have been, especially in the hands of a generous, humanist filmmaker like Heller. But instead of discovering what’s relatable and worthwhile in a complex, despicable character, like she gave us in Can You Ever Forgive Me?, the protagonist here is a big flat slab of nope and sinks the surrounding film.

(Also, someone pointed out on Twitter that, if you watch A Beautiful Day in the Neighborhood without the sound, it looks and feels like a horror movie. And now I can’t unsee that. It makes sense British audiences kept waiting for something sinister to happen.) [Grade: B-]