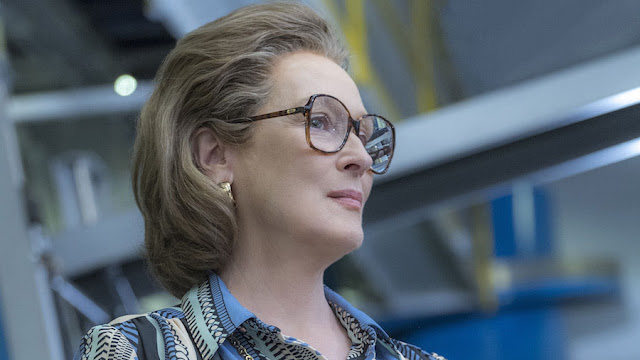 Steven Spielberg’s The Post doesn’t surprise anyone. One, it tells a famous, well-known story; two, it’s obvious from moment one where it’s heading; and three, it’s not trying to pull a Houdini and execute any startling narrative gymnastics. It also won’t surprise anyone that The Post is excellent, occasionally thrilling, and watching Meryl Streep, Tom Hanks, and Spielberg together is like watching a goddamn symphony.

That’s perhaps the least shocking statement I’ve ever made. After all, this is America’s kindly movie uncle doing what he does, making a movie that’s effortlessly beautiful and graceful in a way that’s so difficult to pull off but Spielberg makes look as easy as breathing. 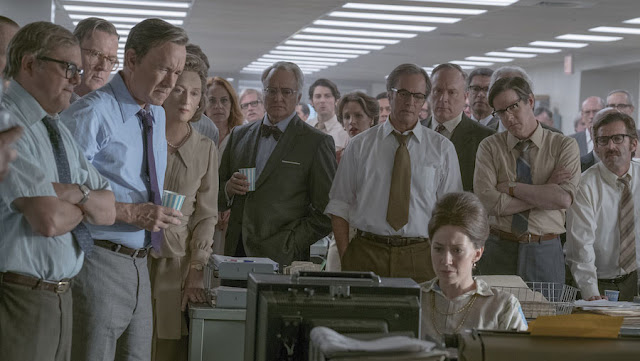 This is Spielberg going to bat for freedom of the press in a time when we sorely need it. The president of the United States is working to dismantle and discredit the press, every day we learn that another vital news outlet is being shuttered by corporate masters, and I’ve lost count of how many entire newsrooms have been cleared, scorched-earth-style, and how many writers have been laid off for daring to demand things like being paid, health insurance, or a union to fight for their rights. It’s a dark period for journalism, which makes The Post even more timely and pressing.

The plot revolves around the publication of the Pentagon Papers by The New York Times and The Washington Post in 1971. These leaked government documents detailed the true extent of the U.S.’s involvement in the Vietnam War, and the true extent to which the government, across multiple administrations, lied to cover its ass. 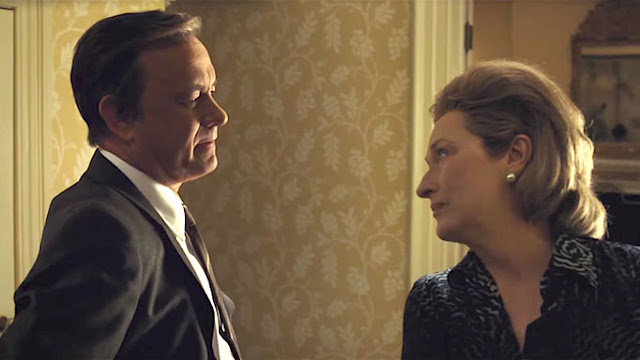 Though the deceit spanned multiple presidencies, the Nixon administration, true to form, attempted to suppress the media. The Washington Post (along with the NYT, though their role is minimized here) was at the center of this storm. Led by publisher Kay Graham (Meryl Streep) and hard-charging editor Ben Bradlee (Tom Hanks), the story is relatively simple: do they publish the papers or not? That simple question, of course, leads to a tangle of legal, moral, ethical ramifications; it’s the government trying to operate with impunity and the press trying to keep them in check; it’s David and Goliath in a knock-down, drag-out brawl over the Constitution and the soul of the nation.

But while there are massive, large-scale implications, the script from Liz Hannah and Josh Singer gives Kay and Ben personal stakes as well. Both have private interests that pull them in different directions. 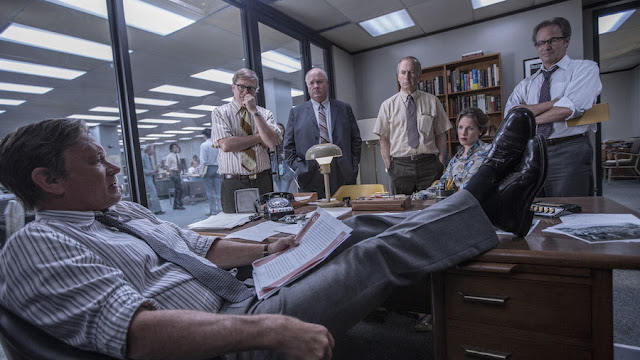 Though the paper is her family business, Kay has always been more a socialite than a publisher. Her father gave the paper to her husband to run; she only took over the job after his suicide, making her the first female newspaper publisher. Among her close friends, she counts Robert McNamara (Bruce Greenwood), the architect of the Vietnam War, who, let’s just say, doesn’t come off particularly well in the Pentagon Papers.

Kay also has her legacy, and her family’s legacy, to consider. If she publishes, is that the end of the paper, the end of her business, and the end of the only life she’s ever known? She’s complex and conflicted, and living entirely in a world dominated by men—she’s often the only woman in the room, and the men treat her as an outsider, even those who work for her. Streep plays her as uncertain and torn, but also strong enough to trust herself, her own conclusions, and though she considers the advice of those around her, she makes her own choices. 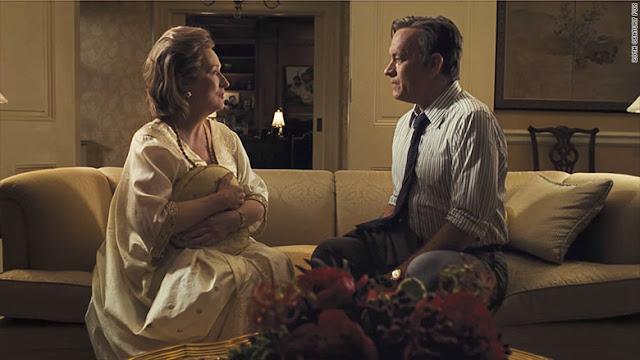 A personal friend of JFK, who also doesn’t come off well in the reveal, Ben faces similarly split allegiances. He bounces between his duties as a newspaper man, his profession, and more personal obligations. Hanks gives Ben a brashness and bravado, but also a softer, human streak. And it’s these individual anchors with Kay and Ben that ground the story. We recognize the scope and scale, but the intimate moments give it texture, make it relatable, and provide emotional ties.

Because The Post is a Steven Spielberg movie, and everyone wants to be in a Steven Spielberg movie, he assembled an almost embarrassingly fancy cast. Practically every actor is at least moderately famous. On occasion, this causes distractions—it feels like they’re all just lounging around on screen, waiting for their one big shining moment. For example, you notice Carrie Coons as witty Post writer Meg Greenfield. She’s always around, but does little beyond that. She’s just kind of there, until it’s time for her speech. The same goes for Alison Brie, Bruce Greenwood, Bob Odenkirk, and countless others. 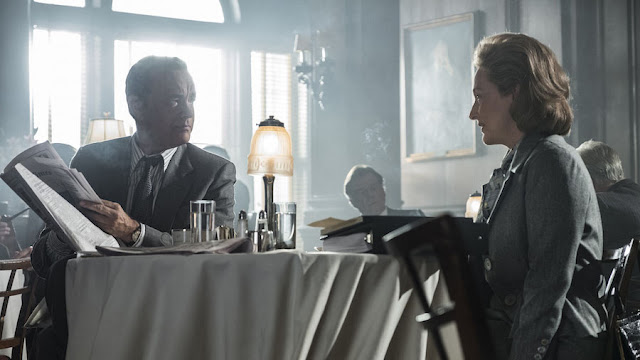 While Spielberg stacked the cast, this is the Streep and Hanks show. No one else matters, and The Post is worth watching for them alone. Spielberg is smart enough to stay out of their way and let them have at it, and their sharp, weighty back and forth is the true joy of this movie. And I can’t lie, I really enjoy watching Tom Hanks curse.

For the 28th time, Spielberg collaborates with co-conspirator John Williams, and the score is just as good as we all expect from the master. The sharp strings lend the already tense scenes the taut air of a suspense thriller and push the momentum forward. In certain moments it unspools like an espionage potboiler. 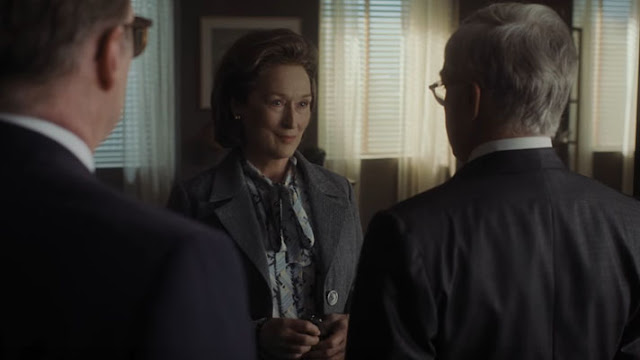 Set primarily in living rooms, offices, and boardrooms—not always the most visually exciting locales—cinematographer Janusz Kaminski (yet another Spielberg regular) manages to make them gorgeous. And with Spielberg’s knack for intricate staging that appears so natural, each frame belies the breezy precision of masters of their craft. Clear delineation of male and female spaces—the dining room versus the parlor; the boardroom versus the kitchen—drives home the gendered themes woven throughout.

The Post never bogs down and becomes a familiar courtroom procedural—it veers in that direction, but rights the course at the last moment. Though there are beats that land a bit too on the nose—as vital a rallying cry as it is, it’s occasionally too self-aware of its own importance and timeliness. 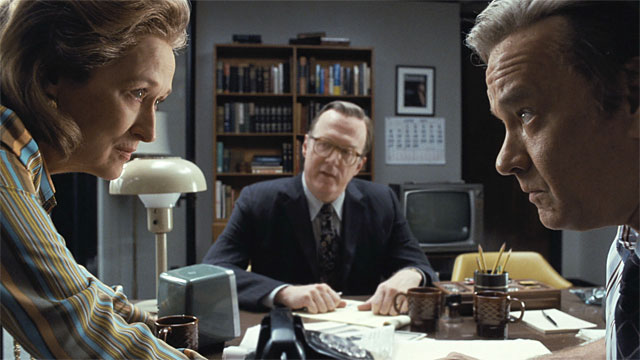 Tight, compact, and compelling throughout, The Post may be a touch heavy-handed in places, and everything may wrap up in an oh-so-tidy package. Still, it’s exhilarating, pressing, and gorgeous in that natural, artless way only Spielberg can pull off. [Grade: B+]

Posted by Brent McKnight at 6:52 AM