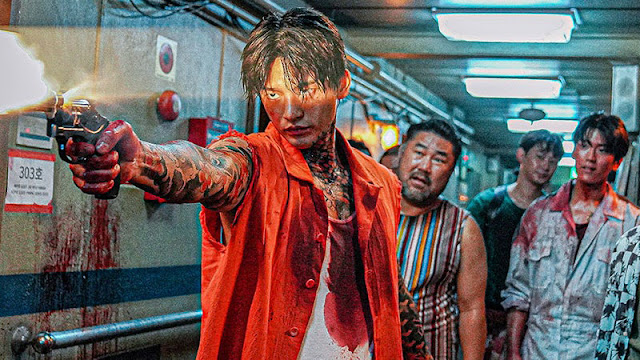 “How come you’re always covered in blood?” This single line of dialogue between characters accurately encapsulates Project Wolf Hunting, the new action movie from writer/director Kim Hong-sun (The Chase). The answer is also relatively simple: because there is so, so much blood in which to be covered. Not only is the movie over-the-top violent, but every last wound is an absolute gusher, just nonstop blood spurting out of heads and necks and severed limbs of all varieties. Everything is some combination of slippery and sticky and showered in red.

For the first hour, Project Wolf Hunting plays out like Con-Air on a boat. A bunch of criminals on the run, captured in the Philippines, are being extradited to South Korea via a cargo ship. On the way, they break free and take over the vessel. At around the halfway mark, the story makes a dramatic shift, and the narrative becomes something of a Predator riff with Universal Soldier flourishes for good measure. 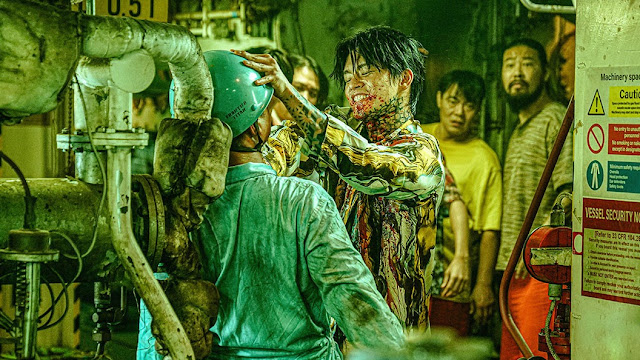 This isn’t really a spoiler, as the film sets it up from early on and it forms a major part of the movie, but in addition to the prisoners, the ship also secretly transports an experiment and the criminals accidentally unleash an unstoppable killing machine. As one might expect, the unstoppable killing machine goes on an kill-crazy rampage. This story and characters  aren’t much, and primarily exist as a delivery system to get meat into the cinematic meat grinder.

There are really only three people of note or consequence in Project Wolf Hunting. There’s Jong-du, the vicious, heavily tattooed leader of the criminals. He doesn’t have much personality beyond being an evil murder boy, but Seo In-guk plays him with a vicious, razor-toothed glee that’s a total blast. Do-il (Jang Dong-yoon) is another prisoner, this one quiet and reserved and doesn’t seem quite as bad as his counterparts. He obviously harbors a deep secret that gradually comes out over the course of the movie. Then there’s Alpha (Choi Gwi-hwa, The Roundup), the aforementioned killing machine. With eyes stappled shut, a mouthful of maggots, and a continual sheen of blood from head to toe, he cuts a horrific figure. His general function is to pummel and bludgeon and otherwise murder his way through the ship, towering over the other members of the cast, at times resembling an undead Marko Zaror. 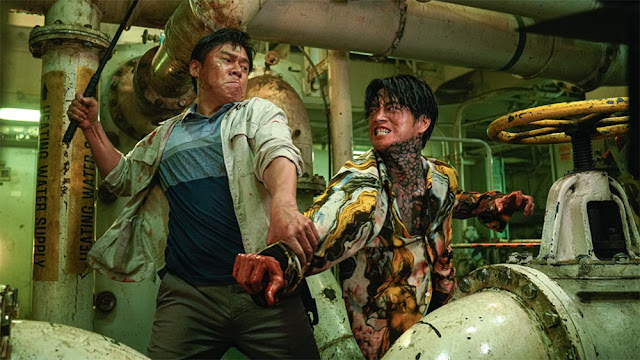 Even these three, while the most notable, are little more than their surface characteristics and affectations. Kim’s script doesn’t allow for much depth. Part of that is because, between the cops and criminals and crewmembers, there are so many people there’s not enough space to develop anyone with real nuance or personality. Another reason is because Project Wolf Hunting moves at a breakneck pace for most of its two hours. It’s so murder-happy there’s no time for well-rounded characters. They’re mechanisms to spurt blood, nothing else.

And that’s the film’s biggest weakness. All the violence and mayhem are fun and brutal and entertaining as hell. For a  while. But the deaths also carry little weight. There’s no one interesting or particularly compelling; cop, criminal, or otherwise. Once Alpha is unleashed, the film loses momentum as it’s just one inconsequential death on top of another. Calling them cannon fodder makes them sound more intriguing and complex than most of them actually are. Hatchets, wrenches, knives, guns, a sledge hammer, good ol’ bare hands, a severed limb, damn near anything that can be used to kill someone is used to kill someone. After a while, it exhausts its effectiveness. 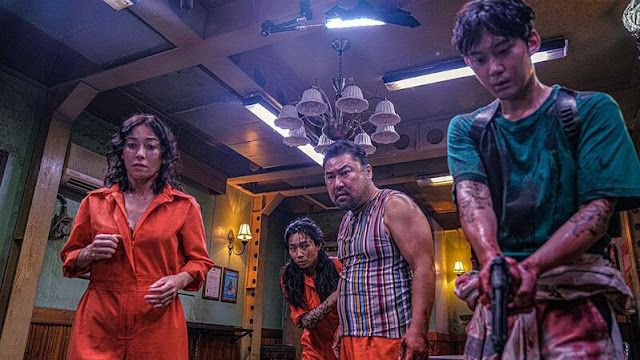 Despite losing velocity in the middle, and elements that could easily be trimmed—there’s an  unnecessary opening that, while cool, only exists as an overly convoluted reason why they’re on a ship in the first place—Project Wolf Hunting is ultimately a damn good time. Wild and raucous and one hell of a professional calling card for the folks behind the endless blood geysers, this will play like gangbusters with a rowdy crowd. [Grade: B+]