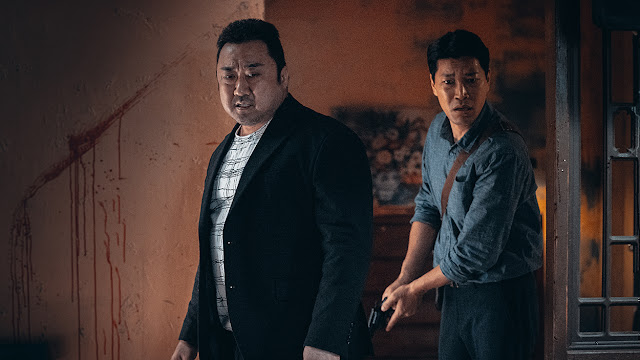 Ma Dong-seok, also known as Don Lee, just wrecking dudes, is a true thing of beauty. That single fact is more than enough reason to watch a movie; I’ve watched movies for far, far less. If that wasn’t enough to get The Roundup to pop on my radar (it certainly was), the fact that director Lee Sang-yong’s film is a follow up to 2017’s The Outlaws, which prominently features Ma running amok through the Seoul underworld. And while this new chapter may not quite live up to its predecessor, it’s still a more than worthy successor.

Ma once again plays Ma Seok-do, a beefy, hard-headed detective not opposed to pummeling information out of reluctant criminals. When he travels to Vietnam with his strait-laced captain, Jeon Il-man (Choi Gwi-hwa) to extradite a South Korean fugitive, it throws them in the path of Kang Hae-sang (Son Seok-koo), another wanted man who has been preying on Korean tourists, kidnapping them, collecting ransom, then murdering them. This discovery starts them down a twisted path of murder, abduction, and action scenes.

This all sounds dark and brutal, and it certainly is on occasion. Lee and company aren’t shy about blood or torture or machete fights. But while all the action-thriller trappings are present and accounted for, there’s a prominent comedic streak, what with the exacerbated captain who’s had it up to here with his subordinate’s blunt antics. The two tones sometimes clash, but for the most part, Lee and Ma, who collaborated on the script with Kim Min-seong and Lee Young-jong, keep things balanced.

The Roundup offers up an ideal vehicle for what Ma does best. Yes, he’s a massive, imposing figure, but he has a relatable everyman quality. He’s just a guy doing his job, getting hassled by his boss and people who don’t understand his process, but he also happens to be really good at punching people very, very hard.

[Related Reading: 'The Gangster, The Cop, The Devil' Movie Review]

That’s another refreshing thing about The Roundup, this isn’t super cop versus master criminal. Ma is a good cop, but he’s also kind up a meathead. At the same time, Kang is as cold-blooded as they come, but he’s also hardly a genius criminal devising intricate schemes—at times he’s borderline incompetent and simply winging it. All of which provides a fun dynamic, especially when peppered with badass fight scenes—see the previously mentioned machete fights, but also prominently featured are knives, hatchets, and a gun here and there.

Lee crafts slick, well put together action, strong and solid but never flashy. He and cinematographer Ju Sung-lim stage and shoot brawls and foot chases and high-speed pursuits with a matter-of-fact straightforwardness that belies a great deal of restraint. It would be so easy, especially for a director whose only other feature is from 2009, to intrude and inject flashy visual tricks and flourishes. But while the film has a definite style, it’s never obtrusive or tries to grab attention away from the action.

The pace does flag a couple of times, especially when the script leans heavily on the more procedural elements. It’s standard stuff that’s too familiar to be of much interest, though necessary as narrative connective tissue. These primarily occur when the story grows overly convoluted, introducing additional plot complications that, instead of adding texture, just create a bit of drag and bloat. There are even a few times where the film sidelines Ma for extended bits, including for much of a frantic chase near the end. Fortunately, we’re never far from a fistfight or stabbing to liven things up.

The Roundup certainly isn’t going to blow many minds, but it does deliver a much-better-than-average action saga, mixing humor and blood spatter, goofiness and brutality. And again, there’s true joy to be found for action fans watching Ma Dong-seok thrash goons and barrel his way through an onslaught of bad guys. [Grade: B]

Posted by Brent McKnight at 5:53 AM