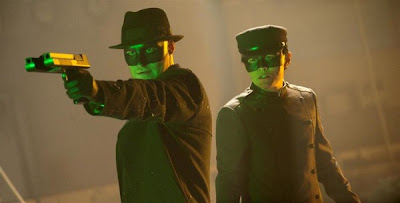 Going into the new adaptation of the 1960s TV show “The Green Hornet”, you’re likely to wonder, was it really necessary to make this movie in 3D? The answer is, no, not really. Director Michel Gondry has some fun with it, mostly during Kato’s (Jay Chou) fight scenes. Aside from that, however, the 3D presentation adds little to movie beyond the awkwardness of trying to make a cumbersome pair of 3D glasses sit comfortably on your face. Gondry’s inventive visual style is on display throughout the film—most notably in a great shot that splits and follows two characters, then splits again, and again and again, until a single shot has branched out exponentially—but never in a way that justifies the post-production 3D conversion. “The Green Hornet” is not a movie that is enhanced by 3D.


That pesky rant out of the way, “The Green Hornet” is better than expected. It isn’t mind blowing, and it certainly could have been better, but overall, it’s a fun, entertaining take on a superhero movie. Having said that, if you’re not a fan of Seth Rogan, and a lot of you aren’t, you might want to skip this movie. Rogan’s fingerprints are even more prominent that Gondry’s, and it is more Rogan’s (and his writing partner Evan Goldberg) film than anyone else’s.

Rogan plays Britt Reid, a spoiled rich kid who’s never done anything more worthwhile than throw kickass parties in his entire life. When his stern, newspaper publisher father (Tom Wilkinson) dies, Britt is forced to make some grown up decisions. An encounter with his father’s mechanic/barista Kato (Chou), leads to them becoming superheroes, though superheroes masquerading as villains in order to infiltrate the criminal underworld, which is controlled exclusively by Chudnofsky (Christoph Waltz). Thus, The Green Hornet is born. Mostly the masked crime fighters drive around in a sweet bulletproof car with lots of guns and rockets and a flamethrower, trying to figure out what the hell they’re doing.

“The Green Hornet” is best in the scenes between Rogan and Chou. The two have a chemistry that fuels a natural back and forth, which turns to chippy bickering as the pressure of secret identities and vigilantism creates a rift in their friendship. It’s good that these interactions work, because that’s where the majority of the film is spent. Again, this is very much in line with everything that Seth Rogan is identified with, so if you’re not a fan. . . But if you can get past that and stomach Rogan for a while it’s worth it since almost all of his scenes are with Kato, and Chou’s Kato is the best character in the entire movie. Kato is a welcome surprise, with a understated smart-ass aspect to his personality that could almost be mistaken for innocence or naïveté if not for the mischievous glint in his eye.

The other place where “The Green Hornet” succeeds pretty well is in the in the action. In the TV show Bruce Lee, who is of course the greatest on screen martial artist of all time, played Kato. Those are big shoes to fill, and while he is no Bruce Lee, Chou is a passable badass. Once you get into the heart of the film, after all the building blocks are in place and the exposition is taken care of, which happens with merciful quickness, there are car chases and fist fights galore. And thankfully where these clashes are concerned, Gondry wisely places Chou front and center, leaving Rogan to skulk on the periphery.

While the action and momentum of the plot are enough to propel you past the smaller hiccups and potholes in the story, there are a number of places where the pace of “The Green Hornet” drags. The primary culprit is the subplot dealing with Britt’s secretary Lenore Case (Cameron Diaz), an awkward attempt to have some semblance of a love interest. The character is a completely unnecessary plot complication, totally uninteresting, and only serves to drive a wedge between Britt and Kato, and to introduce a clumsy theme about responsibility and integrity in media. It doesn’t fit with the rest of the movie, and is never developed any further than to say there should be more ideals and responsibility in journalism.

Christoph Waltz is also a disappointment, which, in itself, is a disappointment. The issue is not so much with his performance, as with the character of Chudnofsky. He controls all crime in Los Angeles, no small feat, and in his first scene, which also features a great cameo from James Franco, he seems like he is going to be a hardcore, scary as hell villain. Only that’s not the case. Chudnofsky is more concerned with people viewing him as scary than actually being scary. Basically he wants people to be afraid of him the way a nerdy kid wants the cool kids to like him. He’s more of a cartoon than a badguy. Rogan and Goldberg should have made Chudnofsky a straight-up, stone-cold killer instead of a neurotic, soft-spoken criminal overlord. You know Waltz can pull off that role, and it would provide a nice counter to the silliness that permeates the Britt/Kato dynamic. That sort of balance would have helped “The Green Hornet” immensely.

Though there are problems, and the whole thing is pretty uneven, “The Green Hornet” is a reasonable success. It’s a fun movie that is visually interesting even in small moments, like when Gondry moves his camera across a stream of newspapers flowing off of the presses, or into Kato’s brain as he is about to dismantle a group of armed thugs. Beyond that, “The Green Hornet” is a decently entertaining film, and nothing more spectacular than that.
Posted by Brent McKnight at 11:19 AM