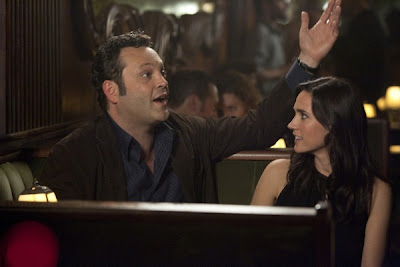 Dedicated bachelor Ronny Valentine (Vince Vaughn) has a problem. After finally deciding to propose to his longtime girlfriend, Beth (a woefully underused Jennifer Connelly) he is looking for the perfect place to propose to her, only instead of finding this magical romantic wonderland, he sees Geneva (Winona Ryder), the wife of his best friend and business partner, Nick Brannen (Kevin James), making out with some random dude. How can Ronny tell Nick that his wife is running around on him? Nick is super high strung to begin with, so much so that he has a long and troubled history with stomach ulcers, and to make maters worse, the pair have a make or break business deal to contend with (they’ve been handed the task of making an electric car that sounds like a muscle car so people can drive an environmentally responsible vehicle without feeling like a pussy. Yup.). That’s the story of the mess that is Ron Howard’s new film, “The Dilemma”. It’s a thin premise to begin with, one that becomes even more flimsy as the movie goes on.


Much like Ronny, “The Dilemma” has problems. Ronny is the typical Vaughn character, a fast-talking charmer who has always been able to talk his way out of tight situations, and watching him endlessly wrestle with his predicament is about as interesting as, well, watching someone wrestle with a tough decision. He waffles back and forth. Does he tell Nick, ruin his life, and send him over the edge into a nervous breakdown? Does he let Nick live in ignorance? Is Nick all that innocent himself? By the time you find Ronny talking to God on the bench at a bus stop, you’re about to pull off your own fingernails. The story plods on like this for a while, and just when you think you know think that the movie has finally picked a direction, it wanders off on one of many tangents. In trying to accomplish a wide array of goals, it doesn’t accomplish anything.

Because it’s a Ron Howard movie, “The Dilemma” can’t just be a light-hearted comedy, and transitions into heavy-handed over sentimentality, becoming a simplified cautionary tale about how everyone really should be honest with each other all the time. Ronny is a recovering gambling addict, and when he starts acting strange everyone assumes that he’s off the wagon, so to speak. Then he begins to suspect that Beth is cheating on him, and so on and so on. After a while the whole thing becomes tedious and predictable, and at 118 minutes, is at least 30 minutes longer than it needs to be. There are a few chuckles, but overall the comedy is toothless and weak. Vaughn is funny in the exact same way that he always is, and you get the feeling that you’ve seen this all before.

Who has ever said that Channing Tatum is the best part of any movie? But you know what? He is the best part of “The Dilemma”. The scenes between Ronny and Zip (Tatum), the guy Geneva is boning on the side, are hands down the high points of the film. When you boil it down, “The Dilemma” is little more than one great scene surrounded by meh. Scratch that, Queen Latifah, as a Dodge executive, is hilarious, though ultimately pointless. She exists for no other reason than to provide a deadline for Ronny and Nick, but makes the most of her limited screen time, stealing every scene by yelling loudly about her “lady wood” and saying things like, “I want to bang your brain.” (Amusing Side Bar: One guy at the screening had to explain to his mother what ‘lady wood’ is.)

You should also prepare to be annoyed by endless, sports metaphors (apparently life is a lot like hockey and football, who knew?), but at least you get to see Clint Howard in the obligatory weird-little-man role that he has in all of his brother’s films, so that’s fun. “The Dilemma” is not a bad movie; it simply misses every mark that it aims for. Not quite a comedy with dramatic elements, not fully a drama with funny moments, it’s not really anything.
Posted by Brent McKnight at 11:15 AM