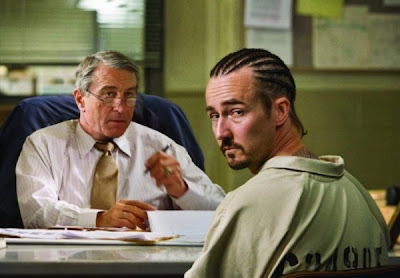 With a cast that includes names like Robert De Niro, Edward Norton, and Milla Jovovich, it would be natural for you to expect a certain level of quality from a film (okay, maybe Milla Jovovich doesn’t automatically equal lofty expectations). But “Stone”, in which these three actors form the core, underperforms at every turn. It’s a little bit like watching the Seattle Mariners this past season. On paper they looked poised to make cause a ruckus and challenge for their division crown, but during the year every player on the roster had career lows, seeming statistical anomalies. “Stone” has pretentions towards being a film of great import, but watching it, you understand why it was never in more than 125 theaters at a single time. It simply isn’t very good.


You find out what kind of guy Jack Mabry (De Niro) is in the first scene, when his wife Madylyn (Frances Conroy) tries to leave their loveless marriage, and he hangs their young daughter out a second story window, threatening to drop the girl unless Madylyn stays. Thus he blackmails his wife into decade after decade of dead, stifling existence, where all she can do is drink, chain smoke, and play poker with the girls. That first scene colors the entire film. De Niro does the same thing it seems he always does these days, he stares intensely and doesn’t say much, and that’s supposed to be enough. You can never root for him because you are all too well aware what a huge pile of crap he is. Supposedly he has inner demons, but all he does is drink, buying two bottles of whisky at a time, and watch the golf channel, and no other aspects of his psyche are ever explored. When he cheats on his wife, you’re not surprised, but you don’t actually care either.

Norton is Gerald “Stone” Creeson, an arsonist who is up for parole. He has cornrows that somehow make him look like a basketball player, and he talks with an exaggerated, faux I’m-from-the-street accent that is amusing at first, but grating after the initial few minutes. He rambles on and on incessantly, and you don’t blame Jack, who happens to be Stone’s parole officer, for getting irritated with him. Stone also has a wife Lucetta (Jovovich), who is deeply devoted to him, though she’s banging a dude with a ponytail, and even willing to seduce Jack.

“Stone” tries to be a tense psychological thriller, where two men play a cat and mouse game with each other, toying with the other’s mind while you wonder who is really pulling one over on whom. Stone is supposed to be a devious puppet master, but he has what appears to be a nervous breakdown/religious epiphany in the middle of the film while watching a guy get shanked to death in front of him (at the same time Jack and Lucetta are having sex, in a scene that is constructed, on a surface level, like one of Martin Sheen’s dark moments in “Apocalypse Now”), and seems to lose interest in his own story. All the while it’s pounded into you that Jack and Stone are really a lot more alike than either of them think. They both have desires, regrets, poor decision making skills, and want to jump Milla Jovovich’s bones. However, the reality of “Stone” is that it’s an uneven mess, full of scrambled religious messages, and an awkward running theme of symbolic “sounds”.

The four main characters—Jack, Stone, Lucetta, and Madylyn—are interesting, at least where they are when the story begins, but director John Curran doesn’t utilize them. Instead of building towards a climax, the film falls into a middling holding pattern and hangs out there for most of the film. The tension never increases beyond a certain point, the psychological warfare never intensifies, the crazy femme fatale isn’t all that crazy, she’s a wing-nut for sure, but never feels dangerous. “Stone” is a movie that is defined more by what it doesn’t do rather than by what it does. It putters around in the middle of the road, and at the end, all you can do is shrug and move on.

“Stone” hits DVD today, if you’re interested, and the only extra feature is a six-minute making of documentary.
Posted by Brent McKnight at 9:45 AM