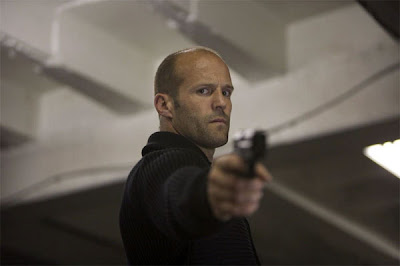 Just to get this out of the way up front, Simon West’s (yes, the guy responsible for “Con Air”, which I love dearly, but will never claim is a good movie) “The Mechanic”, starring Jason Statham and Ben Foster, is a remake of Michael Winner’s 1972 film, starring Charles Bronson and Jan-Michael Vincent. I love the original (I have a dog named Bronson for Christ’s sake), and have been wildly skeptical of the new jack revamp of a film that I hold near and dear. The trailers and images that were released made “The Mechanic 2011” look suspiciously like a run-of-the-mill action film, and the fact that CBS Films tucked the release in at the tail end of the January dead zone did not bode well. Needless to say, my worry increased steadily as the release date approached.


Now that that I’ve written that disclaimer, I have to say that I actually rather enjoyed “The Mechanic 2011”. It is far from perfect, and there are a few moments that might make one cringe, but overall, it stays close to the story of the original (there are a few glaring changes, but I’m going to try to stay away from spoilers as much as I can), and remains true to the tough guy, badass nature of the source material.

Statham plays Arthur Bishop, a “mechanic”, which, much like the term “cleaner” in “Leon”, is code for assassin. He is the best at what he does, meticulous, thorough, clean, and efficient. Most of his jobs look like accidental deaths, and no one ever knows he was there. He’s also isolated and lonely, living a reclusive life listening to LPs in his bayou estate. In the days of the original, Bishop was a unique character, and the lonesome hitman had yet to become an overused type. The only connections, you can’t call them friends, Bishop has in this world are his mentor Harry (Donald Sutherland), and a prostitute (Mini Anden) he frequents. She’s one of the only women in “The Mechanic” (the other is a woman Ben Foster’s character bangs in a back alley, it’s obvious who the target audience is here), and doesn’t even believe that Bishop’s real name is Arthur.

When Bishop is commissioned to hit Harry, he’s conflicted, but ultimately completes the assignment with a professional touch, making it look like a random New Orleans car jacking gone bad. Harry’s estranged son Steve (Foster) shows up to deal the death of his father. He has a vicious streak, and an unfocused hankering for vengeance, and ultimately Bishop takes the troubled youngster under his wing, teaching him the ways of his trade. The two are a contrast in styles. Bishop is all subtly and quiet precision, whereas Steve is brash and hot headed, prone to being contrary simply for the sake of being difficult, but the two form a bond, and start working together after a sweet training montage full of gunfire and exploding cinderblocks.

Statham really only does one thing, but he does that one thing well, and I generally like this one thing that he does. He’s one of the few actors making this type of film and not being relegated to the direct to video market (not that that’s a bad thing, DTV is where some of the best action films are being made). This isn’t the wild, fast-paced, FX heavy action of filmmakers like Michael Bay, “The Mechanic” is a throwback to earlier films, films like the original, driven by tough as leather characters being tough, and Statham is a nice fit for the lead. Sure he’s balding and has a funny accent, but he’s also a decent badass, and finds a perfect balance with Foster, who brings some nice things to the table as well. Steve has a smartass, gallows humor to him, but even though he breaks up the serious atmosphere with a few laughs for punctuation, you can also see the emotional undercurrent in his character. He puts up a tough front about the death of his father, but you know that the barrier is a defense mechanism and that he has no idea how to cope except through eruptions of violence.

Speaking of violence, “The Mechanic” is certainly doesn’t shy away from brutality. There are a couple of moments that border on being hard to watch, like when Steve goes fishing for carjackers, hoping to catch the one who murdered his father.

One thing I’ll say about the end, don’t worry, it doesn’t give much away, is that there are a bunch of unnecessary explosions. It’s like they got close to the end of the shoot, looked around, realized they were under budget, and decided, what the hell, let’s blow some shit up, and then they did.

“The Mechanic” doesn’t break any new ground, and it isn’t perfect, there are a couple moments that skew towards being James Bond-ish (though thankfully they pull back from that quickly), but it delivers almost everything I want out of a movie like this. When I think of the original, the first word that springs to mind is badass, and as far as I’m concerned, West, Statham, Foster, and crew did a pretty good job capturing that in their remake, staying true to the roots of the story. I walked out of the theater pretty satisfied. And other fans of this genre of tough guy action will notice multiple references to “Die Hard”, as well as a tip of the cap to “Rolling Thunder”, so it has that going for it.

One final thing, when are movie villains going to learn that when you kill the hero’s hobo friend, especially if that hero is a professional killer, it’s only going to piss him off? I’ve never killed anyone, and even I know that.
Posted by Brent McKnight at 11:14 AM