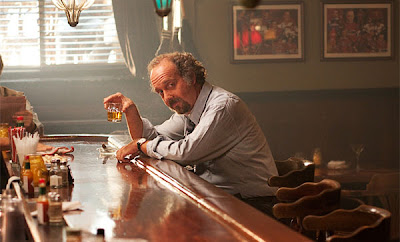 
That’s really the story of “Barney’s Version”. Across the board, the performances are top of the line, but the rest is mired in predictability. Minnie Driver takes a stereotypical, haranguing Jewish wife and owns it. You want horrible things to happen to her. Rosamund Pike as Miriam, another one of Barney’s wives, and there are a bunch, gives a warm performance as Barney’s dream girl, a woman he meets at his own wedding reception by the way, and whom he subsequently pursues for years. Even Scott Speedman, yes, Scott Speedman from “Underworld” and “Felicity”, turns in a solid performance as Barney’s junkie bff, a brilliant but flighty writer who squanders all of his potential. However it is Dustin Hoffman (thank god he’s doing something other than another damn “Meet the Parents” sequel) who steals the show as Barney’s gruff, retired-cop father, Izzy Panofsky. This is a man who’s not above telling the story of busting a prostitute, in graphic detail, to a rabbi, at a wedding. The scenes between Giamatti and Hoffman, full of funny, biting, and ultimately sweet back and forth, are the highpoints of “Barney’s Version”. Izzy is full of useful wisdom, like that successful marriages have been built on much less than a large bank account and a nice rack. He is a wise man indeed.

While the acting is wonderful and all of that, “Barney’s Version” is woefully predictable. The story is broken into chunks of Barney’s life, as he flashes back, wondering where things went wrong. Each segment is roughly defined by the beginning and end of a marriage. There is the story of Barney’s swinging, bohemian stint in Rome in the 1970s, where as soon as you meet his grating, soon-to-be wife (Rachelle Lefevre), who Barney only agrees to marry because he knocked her up, you know exactly what is going to happen. And so goes the rest of the movie. Everything is something you’ve seen before, and the attempts that subtly hint at the ultimate twist aren’t subtle at all, which is a running issue with the film. Delicacy is not the strong suit here. Barney hangs out at a bar called Grumpy’s, they might as well have called it Curmudgeon’s, and the production company where he produces filler Canadian soap operas is named Totally Useless Productions.

“Barney’s Version” feels like multiple movies stitched together where the seams don’t match up. It is by turns a romance, a comedy, a romantic comedy, a murder mystery (though oddly enough without an actual murder), and finally, a domestic drama. The focus changes with each shift in Barney’s life. I get it, the story is an episodic exploration of a single life, and there are a lot of distinct, individual stories that go into any given life. That is very true, and Barney is a jackass who wears his heart on his sleeve, so his stories are going to be more memorable than most. And it is a set up that probably works very well in the novel by Mordecai Richler, but the novel is a form with endless room in which to play and explore and follow flights of fancy. Film doesn’t have that luxury. There is a finite amount of space. “Barney’s Version” is 132 minutes long, and feels every second of it, and because director Richard J. Lewis and writer Michael Konyves try to fit so much into the film, you never connect to it like you need to. For example, the suicide of Barney’s first wife in Rome is supposed to carry a great deal of weight and echo throughout the rest of Barney’s life, but the way it is presented and handled, it never does. If it never happened, you wouldn’t miss it. The death supposedly carries more weight than it actually does, and instead of knowing and feeling this, “Barney’s Version” simply tells you and you’re expected to accept it.

All of this isn’t to say that “Barney’s Version” is without merit. Barney may be enough of an ass to call his ex-wife’s new husband at three in the morning just to screw with him (which may or may not lead to a mild heart attack), but for all his bluster and audacity, he’s flawed in a real, human way that makes him very relatable, and that alone carries you through much of the film. Add to that there are some hilarious moments. Barney’s bitter, nebbish humor is crude and inappropriate in most social situations, but it fits him. He is crude, self-amused, and egotistical, but sometimes laughing and cracking a joke is all you can do because it’s better than crying. Just wait until you see how Izzy goes out (you knew it had to happen), and then you’ll pick up what I’m laying down.

So there are a lot of admirable qualities in “Barney’s Version”, there are also a lot of problems, and in a general sense, there is just a lot of “Barney’s Version”. The film never coalesces, and despite the positive bits, the story is simply too long, too rambling, and too obvious to be completely successful.

But you should keep an eye out for a cameo from David Cronenberg as a director on Barney’s Mountie-based soap “O’Malley of the North”. There are some other cameos, but his is the only one that really matters.
Posted by Brent McKnight at 10:43 AM