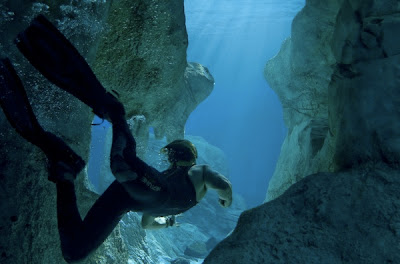 
Where “Sanctum” works best is as a claustrophobic, man versus nature story. Conflict comes naturally from the situation. The team’s only avenue of escape is cut off, and the only possible way they can reach the surface is to delve deeper and deeper into the Earth’s crust. The script takes every opportunity to crank up the tension—the water level keeps rising, they’re running out of batteries, one of the company is an inexperienced diver, and no matter how hard they try, panic sets in. This is a situation with no hope of rescue, where one wrong step can and will kill you, and there are certain harsh realities that some people can accept, while others still cling to the values of their cushy, surface lives. Make no mistake, life stuck deep into the buttcrack of the world is bleak and inhospitable.

During these moments, where the crew threads their way through the bowels of the planet, searching desperately for any crack or seam that may lead to freedom, or at least to another crack or seam to scuttle through, and so on and so forth, “Sanctum” performs admirably as a taut action thriller. Unfortunately, there isn’t much in the way of character development or plot to support this scenario, which are the major issues with the film. What characters there are in “Sanctum” are hackneyed clichés, and thoroughly unlikeable to boot. The leader of the pack, Frank (Richard Roxburgh), is a world-class caver, one of the last great explorers left. He’s a gruff Lance Armstrong lookalike who spouts Coleridge as he dives into the unknown. Beyond that, he’s kind of a prick, and is not above drowning an old friend who has become severely injured and can’t continue. Like no one else, Frank accepts the harsh realities of their situation. His son Josh (Rhys Wakefield) is a spoiled brat who doesn’t appreciate what he has. The financier, Carl (Ioan Gruffud), is a billionaire jock who wants all of the glory without putting in any of the grunt work. He’s the kind of guy who brings his girlfriend, Victoria (Alice Parkinson), who has never been diving before, into a water filled cave just to impress her. Carl’s a cartoon, and snaps exactly in the way you know he is going to snap the first time you see him step out of a plane with his mirrored shades. 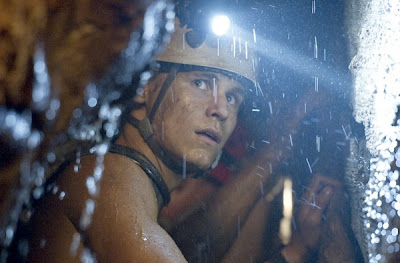 Fortunately for you, you don’t have to give a damn about the characters for the set up to work. They may be sacks of crap, but they’re flat and empty enough that when things start to go south you can still put yourself in their position and feel the breath squeeze out of your lungs as the walls close in on you. Sure, it would help to have someone to root for, but it’s not entirely necessary. The attempts at story beyond the you’re-about-to-drown-two-kilometers-underground-you-have-to-get-the-hell-out-now aspects are nothing but heavy-handed family melodrama that would be more at home on the Lifetime Network than in an action movie.

The story may be trite and contrived, but “Sanctum” director Alister Grierson puts the overused 3D technology to good use. The film looks the best during the dive sequences, when the characters float through a dark, surreal world that no human has ever laid eyes on. These moments are truly impressive. When the story climbs out of the water and onto dry land, the 3D is largely unnecessary, even uncomfortable and jarring at times, like the vast majority of 3D these days, though the underwater scenes make up for the lesser moments.

If you can get past your immediate distaste for the characters, the staunch overacting, and the movie-of-the-week approach to storytelling, which are the indeed major stumbling blocks, “Sanctum” is an entertaining, survival-at-all-costs story. At the high moments, it is an edge of your seat kind of thriller where the tension constantly creeps upwards, and the characters are in real, immediate danger. That’s something that’s all too rare in movies, and something that is woefully underappreciated by Hollywood, the feeling that these characters, like them or not, may not make it out of this alive.

One other impressive thing about “Sanctum” is that even two kilometers below the surface of the earth, trapped in a labyrinth of unexplored caves, they still find a way to show a woman in nothing but her underwear. Way to go guys, way to go.
Posted by Brent McKnight at 5:04 PM