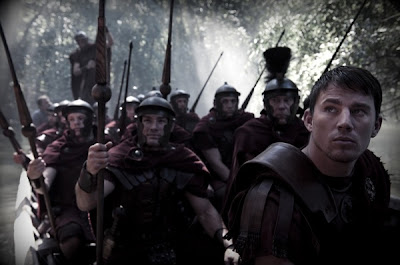 
“The Eagle” is a story about Roman conquest, and as you can imagine, there are some prominent battle sequences. Overall these scenes look like leftovers from the opening battle from “Gladiator”, except with all of the violence missing. You see swords swinging, but the film cuts away before the blades actually slice through anything, and then you’re on to the next Centurion about to hack into someone, and the same thing happens. There are no causal connections at all. It’s as if, in every moment, a handful of frames have been lost. You could watch these fights and say that with all of these armed attacks, you never see anyone get injured. Not only are there no consequences, but this approach also gives the film a jagged, uneven feel, that makes it jarring to watch. Action is the only thing that could have saved “The Eagle”, but for a movie marketed on the epic action movie platform (you can see direct lifts from “Gladiator”, “Braveheart”, and “Lord of the Rings”, among others), there is woefully little of it. The weakest parts of the film are the acting and the story, and those take up the vast majority of the nearly two-hour run time.

20 years ago, the Ninth Legion, along with their beloved standard (a golden eagle), marched into the Highlands of Scotland, never to be heard from again. The disappearance and the loss is a point of shame for Marcus Aquila (Channing Tatum), son of the leader of the Ninth. When he comes of age and earns his first command, he requests a posting in Britain, hoping to restore honor to his family name. In a battle with what can only be described as an overacting hippie warlock, Marcus is wounded, though he displayed great bravery in leading his men. His feats earn him accolades from Rome, but his injuries lead to an honorable discharge from the military. A career soldier, he quickly grows tired of lounging about in his uncle’s (Donald Sutherland) posh villa, and when a rumor about the Eagle surfaces, Marcus, with his Scottish slave Esca (Jamie Bell), who hates all things Roman but owes a blood debt to Marcus for saving his life, in tow, heads north past Hadrian’s Wall, a barrier that was erected after the disappearance of the Ninth and now serves as the de facto boundary of the known world. What follows is a little bit like “Apocalypse Now” lite. The unlikely friends journey into a hostile, nightmarish land, battle rogue warriors, encounter uncooperative villagers, and get taken in by the Seal People, who think that Esca is the master and Marcus the slave.

Channing Tatum was the best part of “The Dilemma”, in fact he’s the only good part of that movie, but he shouldn’t be allowed to carry an entire film. He’s pretty to look at, and his character is supposed to be young, but his delivery is leaden, his attempts to evoke emotion are laughable, his heavy-handed moralizing lacks any passion or fire, and he is so baby-faced that it is impossible to take him seriously as a battle hardened head of a Roman garrison. There are roles Tatum can handle, but a charismatic leader of men is simply not one of them at this stage of his career. Bell is decent as Esca, though his part mainly consists of scowling and hating Rome, but also being conflicted because he owes Marcus his life. When they become bros it only complicates things further. You’re supposed to wonder where Esca’s alliances lie, with the people he was taken from or with his promise to Marcus, and question which bond is stronger, but if you watched any of the trailers or TV spots, they all give that away, and with it goes any hope of tension. Things happen too easily in “The Eagle”. Marcus and Esca go from slave and master to pals over the span of a brief “becoming friends” montage, and then they go from trust to distrust back to trust with a snap of your fingers.

The interactions with the Seal People are something to behold. You get the feeling that you’re watching a classic Hollywood portrayal of Native American culture, like the filmmakers are trying to show something that they don’t really understand, so they simplify it and dumb it down to the point of insulting caricature. The Seal People are uni-dimensional, drunken, child murdering savages, who have giant bonfire dances that are eerily reminiscent of that primal rave scene from the “Matrix” sequel. According to “The Eagle” that’s all there is to their culture. You know that somewhere, someone is trying to make a point about imperialism, occupation, and resistance that is supposed to resonate given the current state of the world, but nothing of the sort happens, and you’re left feeling almost offended at the pointlessness.

“The Eagle” isn’t as brutal as it needs to be to succeed, or even make the story believable, which is saying something for a movie where there are headless corpses hanging upside down from trees, and a child gets his throat slit. The film wants to be violent, and on the surface it is, but it is watered down to the point that even the sound of flesh being sliced is edited out, as if a knife tearing through skin makes no sound at all. More than any film in recent memory, “The Eagle” suffers from the attempts to tone down the violence for a desired rating. This action constrains the entire film, forcing it to rely on other elements, only nothing else is strong enough to prop up the entire movie, and “The Eagle” fails as a result.
Posted by Brent McKnight at 7:43 PM