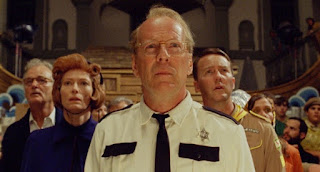 “Moonrise Kingdom” isn’t going to convert any Wes Anderson naysayers. He may as well have autographed every single frame of this movie, that’s how easily identifiable this is as his work. Every little trick and trademark is on display, from quirky, deadpan characters, to shots that track from room to room in sets that resemble giant dollhouses. Even though this an uneven ride at times, “Moonrise Kingdom” is Anderson’s best film in years. The film stars off slow, downright rocky in fact, but eventually, when you get into the heart of the story, it’s engrossing, genuinely touching, and even a touch adventurous.

Anderson’s most prominent hallmark is his characters and their neuroses. The beginning of “Moonrise Kingdom” is almost exclusively that, an extended role call of people, each with their own peculiar flaws and foibles. They are introduced one by one, then thrown together to make a plot. There are two high points in this arena. Edward Norton plays Scout Master Ward, a fastidious troop leader who moonlights as a math teacher during the school year. He’s charged with the task of teaching wilderness survival skills to young boys at summer camp on an isolated New England island in 1965. He’s idealistic and befuddled, and completely out of his depth.

Bruce Willis plays a damaged, wounded cop, something he’s done countless times before, right? Only he’s never played the part quite like this. His Captain Sharp, the police chief on the isle of New Penzance, is a sad, defeated shell of a man. It is a different spin on a familiar part for Willis. Not quite a spoof of the type he could play in his sleep, the role is definitely informed by his history of gung ho ass-kickery.

While those two shine, others fall flat. Bill Murray and Frances McDormand are completely underutilized as a bickering lawyer couple. McDormand’s big idiosyncrasy is that she yells into a megaphone even inside. It’s annoying. Murray plays the same part he has in every Wes Anderson movie: a world-weary sad sack with a cheating wife, mired in melancholy and ennui. Both actors are just going through the motions, pantomiming better characters from other movies. It’s a waste of two immensely talented actors, and admittedly it’s a little depressing to see them on screen and not be particularly interested in anything they do.

And that brings us to the two main characters. The hero of the story is Sam (Jared Gilman), a disillusioned Khaki Scout in love. He’s a troubled orphan who lives in a sort of halfway house where he is mercilessly teased and tormented. Overly serious, none of the other scouts at camp like him. When Sam absconds into the wilderness with his lady love, Lucy (Kara Hayward), it is up to Scout Master Ward, Captain Sharp, Lucy’s parents (Murray and McDormand), and a blood-thirsty band of Khaki Scouts, to round up the wayward lovers as a hurricane descends on New Penzance. This last detail adds a nice pressure and sense of action.

Lucy could have been developed more, her character is a bit of a mishmash; up and down without much in the way of reason our causality. Luckily for “Moonrise Kingdom” Sam carries the day. He is earnest, brutally truthful, inquisitive, and self-loathing. She is prone to bouts of explosive violence, as Sam’s fellow scouts find out in a scene that equates well with a war-is-hell movie. Both he and Lucy are self-aware, depressed, and awkward. Together they explore their burgeoning romance and sexuality with a natural air of innocence.

Though the beginning is problematic, eventually all of these pieces, parts, and themes come together, building like a symphony—a metaphor introduced early in the film. The pace doesn’t truly pick up until Sam and Lucy hit the road, which, considering they’re the focus of the film, takes a surprisingly long time. But once set in motion, things progress quickly and all the disparate pieces fall into place.

The end result always feels a little light, but “Moonrise Kingdom” is funny and heartfelt. Anderson and co-writer Roman Coppola capture the curious ingenuousness of childhood. Sam and Lucy have problems, and are problems, but they are also pure, trying to figure out the way the world works, and wondering what the hell growing up really means. They find the adult world confusing, contradictory, and hypocritical, so why the hell does anyone want any part of that?
Posted by Brent McKnight at 3:06 PM