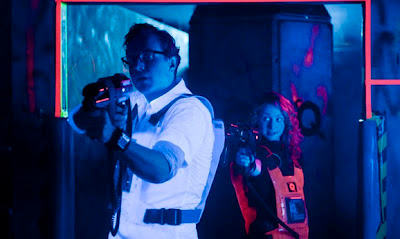 Isn’t what every child wants to hear is that they’re special? That their life means something big and important? That no matter how mundane, humdrum, and otherwise unspectacular their daily existence is, the truth is that they matter? This is the basic premise behind the Irish sci-fi romance Earthbound, which made its world premiere recently at the Seattle International Film Festival. Writer/director Alan Brennan’s debut feature is witty, funny, quixotic, and at times heartbreaking.

When he was eleven years old Joe Norman (Rafe Spall) lost his father. Before he died, the father told Joe the truth about who he is. Joe is the last son of an embattled planet, Zalaxon, and his very existence strikes a blow for the forces of rebellion on his home world. Armed with the knowledge of who he really is, Joe goes through life, bouncing from menial job to menial job, keeping a low profile—except for the nights he breaks into the observatory to view a sporadic wormhole that offers a look at Zalaxon.

Basically Joe is as lonely as humanly possible. He talks to his dad every night via a holographic implant in an old super 8 home movie, and longs for some sort of companionship. But that’s not in the cards for him. Not because he’s awkward and uncomfortable in human social situations, mind you, but because he’s an alien. From outer space. That’s why he doesn’t have any friends.

When Joe meets Maria (Jenn Murray), the one human female who may be genetically compatible with him, his whole world changes. Their courtship is awkward and adorable, but also earnest and touching. Both are delicate creatures, fragile and easily damaged, but each is in good hands with the other. At the same time as he is happy for the first time since childhood, the world systematically tries to dismantle Joe’s identity.

That is the key to Earthbound, whether or not Joe is really from space or not. Is he actually from the planet Zalaxon, as his father told him, or is his life a carefully constructed delusional fantasy designed to give purpose to a sad, depressing life?

Brennan places you right there with Joe as he struggles with doubts about his identity, new and foreign feelings of love, and trying to stay sane in a world that tells him everything he knows to be true is actually false. You feel for him as the people around him try, in the gentlest way possible, to tell him that he’s crazy. Are the headhunters from the main office really sinister bounty hunters from Zalaxon, or are they simply grooming him to move up the corporate ladder because they see potential in him? Is that really a deadly ray gun from his home world, or simply a classic science fiction toy?

Things on Earth make sense to Joe as an alien. Work is a form of slavery, but a necessary part of his cover. From that perspective his life is more of an intelligence-gathering mission than a series of dead ends and false starts. He isn’t learning to interact with people, he’s observing them, studying. When he begins to doubt himself a melancholy washes over him as he fights to maintain his grip. When you learn the hard details of his young life—a trail of orphanages and foster homes—a delusion as a safety net makes a great deal of sense.

The script of Earthbound cleverly handles Joe’s predicament, balancing exterior doubts with internal certainties. It’s this back and forth, the is-he-or-isn’t-he dichotomy that provides the film’s tension and narrative thrust. It’s the heart and relationships between the characters—especially Joe and Maria, and Joe and his father—that draw you in and connect you to the story. The quirks, personality ticks, and gleefully awkward moments provide the humor. Earthbound is by turns hilarious and heartbreaking, affecting and fun, and if this finds a way to your neck of the woods, fit it into your movie going schedule without delay.

Posted by Brent McKnight at 3:42 PM