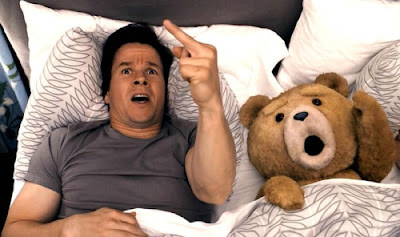 Seth MacFarlane’s foul-mouthed buddy comedy “Ted” is surprising. Not because of the story—there is nothing at all unusual there—but because it’s actually pretty funny. It isn’t brilliant, or game changing, or anything like that, but it’s amusing enough. I’m one of the legions who have long since abandoned MacFarlane’s most well known product, “Family Guy”. The “do something enough times it automatically becomes funny” has run its course, and you can only watch an extended fist fight between Peter Griffin and a giant chicken so many times before you’ve had enough. While the story of “Ted” is painfully bland and obvious—you know exactly what is coming every step of the way—MacFarlane avoids some the pitfalls “Family Guy” is prone to.

The film follows John Bennett (Mark Wahlberg) and his magical childhood friend, Ted. It just so happens that Ted is in fact a teddy bear brought to life by the wish of a lonely young boy. As you learn, a young boy’s wish is the most powerful force in the world, except for an Apache helicopter, those things are death machines. Ted isn’t some sort of delusion devised by John’s troubled psyche to make up for a problematic childhood, Ted is very real. In fact he was a minor celebrity in the 1980s. People like toys come to life. But John can never grow up while he still clings to his teddy bear, and his girlfriend, Lori (Mila Kunis), gives him an ultimatum—her or the bear. “Ted” is really just the plot from “I Love You Man” with the Jason Segal part played by a computer generated plush toy.

Overall the comedy in “Ted” is in the same anti-pc vein of “Family Guy”. Some of these jokes hit, some jokes miss, but they provide a few pleasant chuckles that sustain you between the handful of bigger pieces that bring the house down. Ted and John have an all-out brawl—we’re talking a “They Live!” style epic beatdown here—that is amazing, and there is a drug-addled rager with Sam J. Jones from “Flash Gordon” that might make you pee your pants a little. Oh, and Ted has a penchant for trashy prostitutes that leads to some world-class filth.

When “Ted” tries to be serious and have a story the pace bogs down and the film becomes tedious. When it focuses on John and Ted getting high in the couch and watching the bonus features on the “Cheers” box set, is when the movie is at its best. Ted looks so perfect that you after a few minutes you hardly notice he’s a cartoon. He’s raggedy and tattered, with thin spots worn in his fuzz, like twenty-eight-year-old toy would be, and, as strange as this may be to say, he and Wahlberg have great screen chemistry.

Wahlberg and Kunis are also good together. Though their story is responsible for bulk of the down beats in the picture, they banter back and forth like two people who know each other thoroughly and are truly at ease together. It is fun to watch Wahlberg let loose and just go for big comedy. He isn’t trying to be dramatic, or full of action stud posturing. This time around he plays a dude who likes to smoke weed with his teddy bear instead of going to his dead end job, hang out with his too-good-for-him girlfriend, and doesn’t want to grow up.

The plot chugs along, predictable, and then, just as predictably, it gets wacky. Giovanni Ribisi plays a creepy stalker who has been obsessed with Ted since childhood. And why does every movie set in Boston have to go to Fenway Park? Joel McHale shows up and does what he does, playing Lori’s smarmy, sexually harassing boss. Unfortunately he falls flat, as does everything else that involves any of the three main character’s work lives. Ted’s white-trash girlfriend is little more than a screaming reality TV caricature. But when Ted, John, and Lori are together is when “Ted” peaks.

“Ted” isn’t great, but it isn’t bad, and I have to say that it is better than I expected. It’s a funny premise, executed, for the most part, well. We’re talking dick-and-fart jokes here, not highbrow turns of phrase and witty barbs. Know what you’re getting into. The movie does exactly what it sets out to do, provides some moderate laughs, and an entertaining, if ultimately rather forgettable time at the movies. You can watch it, guffaw a few times, and never have to think about it again.
Posted by Brent McKnight at 8:34 PM