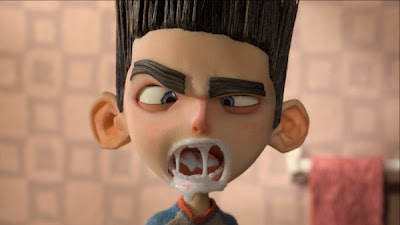 Packaged and marketed as a kid’s movie, “ParaNorman”, the new stop-motion animated offering from Laika—the folks behind “Coraline”—is everything you want out of this kind of movie. This is a horror movie aimed at children, one that is also funny, touching, and, most importantly, full of legitimate frights. Death—in the form of ghosts, zombies, corpses, and the potential for characters to die—is an ever-present specter. At every turn there’s a realistic chance that happily-ever-after might not happen. Scares blend with a strange gallows humor to create a fantastic movie that will get you as pumped up as it gets your kids. Horror fans will love this, as there are copious nods to the genre, including, but not limited to “Halloween”, “Friday the 13th”, and Romero’s “Dead” trilogy.

One of the rarest, most appreciated things about “ParaNorman” is that it doesn’t talk down to the intended audience. Nothing pissed me off more as a kid than when a movie totally insulted my intelligence; the ones that let the kids go along, never in any real danger, and have the adults swoop in at the last moment to save the day. Kids want to be heroes, too, and that’s nothing more than a cop out. “ParaNorman” doesn’t play those games, and it gives the gives the young characters credit for being smart, capable, stronger than grown ups expect them to be, and remarkably intuitive. This is their day. They’re the ones taking all the risks, and the outcome rests solely on their diminutive shoulders.

Norman Babcock (voiced by Kodi Smit-McPhee) is a weird kid. Obsessed with schlocky horror—he has a zombie toothbrush and pair of undead slippers—he’s an outcast, a loner, the kid that all the other kids pick on and call freak. To make matters worse, he sees and talks to the dead. Grandma’s ghost (Elaine Stritch) lives on the couch in the living room. Because of his ability, his parents fear him, and talk about him as if he isn’t in the room with them. You feel for this kid. He just wants to be left alone, but when a witch’s curse threatens his small New England town with a zombie invasion, Norman is the only one who can stop it. If only he can get anyone besides his chubby, spastic, IBS-riddled friend Neil (Tucker Albrizzi) to believe him.

“ParaNorman” isn’t a simple break-the-curse, slay-the-zombies yarn. The story is much more complex than that. At the same time that this is very much a horror film, the creators play around with genre tropes to make what begins as a familiar set up into a unique, fresh movie. At its core, “ParaNorman” is a parable about bullying, and breaking that vicious cycle. A spiral of intolerance, violence, cruelty, and misunderstanding spreads through generations, and is responsible for sorrow, regret, and an out of control town on the verge of chaos and self-destruction. Digging into the underlying causes, “ParaNorman” explores fear, understanding, and what is really frightening. Is it ghouls, ghosts, and the undead that truly terrify you, or an unchecked mob screaming for blood and vengeance?

The way they frame the topic of bullies and bullying is much more effective and engaging than the influx of melodramatic kids-picking-on-kids stories filling TV and movie screens. Not content to simply point out the problem, “ParaNorman” attempts to offer a solution and deal with the issue head on. First and foremost, however, this is a fantastic story, and though the underlying message is important, the film never stoops to heavy-handed preaching or oversimplification.

Neither a typical horror outing, nor average kids movie, “ParaNorman” is definitely a film you need to check out. This is a stunningly beautiful package, full of spooky, memorable imagery. The zombies are cartoonish, but also creepy and gross, and genuinely dark moments are accentuated by wonderfully eccentric wit and comedy that verges on morbid. After all, what other movies have you seen lately where a child wrestles a book out of the fingers of a dead man?

I’m going to go out on a limb and call “ParaNorman” the best animated movie of 2012, and say that it stands up there with “Goonies” for adventure movies aimed at kids. Adult themes of life, death, sex, sexuality, and more pop up, but like everything else in “ParaNorman”, they are handled with grace, and are so interwoven into the film that they’re a natural part of the tapestry.\
Posted by Brent McKnight at 3:50 PM