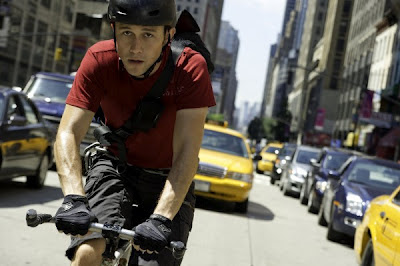 Hear that? That’s the sound of every bike messenger you’ve ever met getting a collective boner. While on paper writer/director David Koepp’s new movie “Premium Rush” sounds terrible, like they weren’t even trying to come up with a real narrative, the movie is actually a blast. It’s a hearty nod to 80’s underground sports movies like “Rad” and “Thrashin’”, though the most apt and obvious comparison is “Gleaming the Cube”. Those first two are ostensibly about the sports—BMX racing and skateboarding respectively—but “Gleaming the Cube” is a story where the characters just happen to be skate punks. “Premium Rush” is basically one long, extended chase scene, the primary characters simply happen to be New York City bike messengers.

Like most films that attempt to peer into a specific subculture (whether it be punk rock, gymnastic, hackers, gamers, Trekkies, whatever), “Premium Rush” gets some things right, some things, not so much. But the plot is minimal, the pace is rapid, and you can forgive the sensationalist approach when the momentum rarely slows down. The opening voiceover informs you that when riding a fixed-gear bicycle the pedals never stop turning, that it is impossible coast. And that’s the approach that Koepp takes, never allowing the movie stop.

Where “Premium Rush” falters the most are the sporadic moments there it does attempt to insert actual plot into the scenario. Wilee (Joseph Gordon-Levitt) is the craziest bike messenger in the NYC. Full of wise cracks, he says things like, “brakes are death.” One afternoon he picks up a last minute delivery. Detective Bobby Monday (Michael Shannon) is a cop with a gambling problem and is in debt to some bad, bad people. In order to square what he owes, he tries to steal Wilee’s package. That’s all.

A few asides do pop up and distract things on occasion. At the same time Wilee zips all over the city trying to outrun Monday, he has to patch things up with his ex-girlfriend, and deal with a rival bike messenger (he wears spandex and rides a bike with gears, that’s you can tell he’s a turd). Apparently Wilee also went to law school, which in this movie is shorthand for he’s smart. The Chinese mob even gets involved, which always livens things up. When these things pop up you can almost hear the script yelling, “hey, you, see, there’s plot right here.” But these tangents don’t last long, and before you know it you’re back in the middle of a chase, which is where you want to be.

For all intents and purposes, “Premium Rush” is a cartoon. A fun, frenetic, bouncy energy infects the film from frame one, which begins with the opening chords of the Who’s “Baba O’Riley”. That moment alone, before you see a single image, tellss you what kind of movie this is. And hell, the two main characters are named Wilee (as in Wil-E Coyote), and Bobby Monday. Shannon is all bluster, fury, over-the-top screaming, and fist shaking. He’s like Yosemite Sam, and you half expect him to stomp around yelling, “tar-nation.” Initially you’re put off by his performance, but when you realize that it completely fits the tone of “Premium Rush”, it makes perfect sense.

Most known as a writer, Koepp throws some nice visual trickery into mix to keep things from getting stale. He does overuse a bit where a yellow line traces a course from point A to point B on a map of Manhattan, but another where Wilee pauses, plotting various courses through precarious situations, provides some high points. This gimmick shows how Wilee sees the world, he uses reflections to spot obstacles, jumping a curb and riding on the sidewalk is a matter of course, and hopping stairs, a fence, or riding along the top of a traffic barrier are all legitimate options. You laugh your ass off as he envisions darting around a cab, and running into a stroller while the mother yells, “my baby,” or as he pictures being mauled by a delivery truck. It’s morbid laughter, to be sure, but laughter nonetheless. Koepp’s narrative bounces around in time, delivering details as they become necessary to the story, never before, and rarely more than you need.

“Premium Rush” is exactly what a movie like this should be. Elements like plot, character, and story take a back seat, never getting in the way of pace and action. Sure it’s cheesy as hell, and you groan when Wilee drunkenly expounds on his life philosophy of how he’d rather die suddenly and brutally on his bike than wear a grey suit and sit behind a desk. But “Premium Rush” is a slick, entertaining ride, full of great stunt work, and if that’s what you’re looking for, you won’t be disappointed.
Posted by Brent McKnight at 9:28 PM