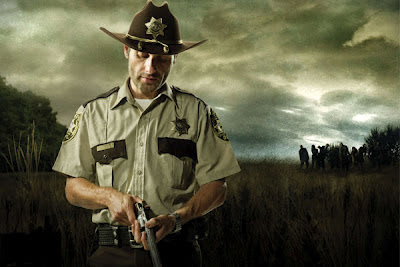 The second season of AMC’s zombie juggernaut “The Walking Dead”, now out on Blu-ray and DVD, is really a tale of two halves. Part one is chiefly concerned with the group, led by Rick Grimes (Andrew Lincoln), tracking down Sophia (Madison Lintz), a young girl in their party who gets lost amidst an undead swarm. The latter half of the season revolves around the escalating tension between Rick and Shane (John Bernthal).

The narrative thread that binds the separate portions of the season together is Hershel’s (Scott Wilson) farm. Fans of Robert Kirkman’s comics will be well aware of the farm, a seeming oasis floating in the middle of the zombie apocalypse. Isolated and out of the way, the farm has escaped as unscathed as seemingly any place left in the world.

Season one of “The Walking Dead” was wildly erratic. Great moments existed, but entire episodes were absolutely horrific. A hit and miss proposition, from week to week you never knew what you were going to get. The second season does a much better job with the consistency issues. To be sure there are still highs and lows, and it is far from perfect, but overall the 13 episodes of season two are a significant improvement.

There are two big complaints with season two of “The Walking Dead”. First, things are needlessly drawn out. In the first part of the season this manifests in the search for Sophia. It goes on for episode after episode. A few times so much else is going on that you nearly forget that is a concern at all, and when they rally up do continue searching you have a momentary jolt where this story seems like an afterthought.

As the show progresses, this trend reveals itself in the form of Randall, a kid that Rick, Glenn (Steven Yuen), and Hershel bring back to the farm. A tedious, repetitive, endless debate about what to do with him consumes multiple episodes. They’re going to kill him, then let him go, then kill him, then let him go. It just goes on, well past the point where it creates any tension. Life or death, by the end you only want it to be done and for them to stop talking about it ad nauseum.

Issue number two is the woeful lack of zombie action. Especially in the first half, entire episodes pass by with hardly a whiff of the undead stinking up the place. You understand that Hershel’s farm is supposed to feel like a sanctuary, a place largely untouched, where the group lets their guard down. And it does function as that, but it gets to a point where that becomes unbelievable. Every other place anyone goes is so overrun and infested with walkers that you can’t buy into this false sense of utopia. And zombies are rad. They’re the highlight of the show, so of course you want more, and when you don’t get any you feel ripped off. In the final handful of episodes this takes a wildly positive turn—zombies cause all sorts of ruckus—but until then, you have to wait to get your walker fix.

One thing that Kirkman’s comic has a wealth of is strong, fully realized female characters. In the show, however, this is noticeably absent, and one of the most frustrating things about watching “The Walking Dead”. The script and the men constantly force the female characters into flat, formulaic conventions. Over the course of the season, cooking, doing laundry, worrying, and making the worst possible decisions at every given moment take up the majority of the women’s screen time. Moving towards the badass that she ultimately becomes, Andrea (Laurie Holden) is the only one to ever question this, and that’s only briefly and once. Maggie (Lauren Cohan) is also a small step forward, but Lori (Sarah Wayne Callies) is wishy-washy, conniving, two-faced, and always puts her own needs first at the expense of others. Carol (Melissa McBride) is the most helpless, frantic stereotype. Either useless or in the way, all she can do is lean on the big strong men for help, incapable of thinking for herself.

“The Walking Dead” is on an encouraging course, but it is a gradual process. Michonne (Danai Gurira) shows up, in a moment where I stood up and cheered. She should add some much needed backbone, not only to the women, but the group as a whole. Maggie has an actual mind of her own, and Andrea toughens up nicely over the final bit of the season. And SPOILER FROM THE COMIC, Lori dies soon, so there’s that to look forward to.

Overall, progress is the key word when talking about “The Walking Dead” season two. There are still huge issues and problems, but the show is moving in the right direction, both in specific ways, and as a whole. At its zenith, season two is bleak, tense, and neck deep in zombies; at its worst, it is aimless, and wastes time on unnecessary filler. What this season does best is build up steam for season three. The group is headed into one of the best story arcs from the comics, new characters are coming in that will permanently alter the chemistry of the group and define their future, and with some minor tweaks and fine tuning, the show could finally live up to the potential of the comics.

The Disc: As you might expect, season two of “The Walking Dead” comes packed with a swarm of bonus features. It’s quite a collection, in terms of both quantity and quality.

Season two comes with a ton of deleted scenes, 30-minutes all told, combed from a total of eight different episodes. And what is more, unlike so many Blu-ray/DVD releases, these deleted scenes are actually worth you time. Some are minor moments that were cut for reasons like time and economy, but there is almost an entire other story arc near the beginning of the season.

As it aired, season two picks up with the group on the road, but that wasn’t the original intention. After the debacle at the CDC, the initial arc had the group return to the nursing home from the episode “Vatos” in season one. What they find is grisly and grim, but it hints at a larger danger that they haven’t encountered, one that will play an important role moving forward: the human menace. On the set of “The Walking Dead” there was widespread drama, bickering, and battles that resemble what happened on screen. You probably heard that show creator Frank Darabont was fired and replaced. Apparently some of that dissent was over whether or not to include this storyline.

Personally, I wish they’d kept this in. Suggesting that they may face danger from other people would have foreshadowed what happens at the bar later in the season, as well as indicate some of the trouble looming on the horizon. Beyond that, having another story arc would have helped move things along in the pace department, they could have explored other avenues instead of wasting so much time on long-winded stories.

Six short webisodes, about 20-minutes total, show the viral outbreak from the perspective of other characters, a divorced couple and their kids. Written and directed by special effects guru Greg Nicotero, these quick bites capture the confusion, chaos, and misinformation at the beginning. At times there is too much family melodrama, and when watched in sequence you have awkward time jumps to contend with. However, there are some good taut moments, nice gore, and this is a decent little addendum to the series.

All the Guts Inside—This feature delves into the special effects employed when Rick and Daryl cut into a zombie’s stomach to look for traces of Sophia.

Live or Let Die—Some characters from the comics live much longer in the television show than they do on the page. Chief among these is Shane (who buys the farm in issue #6), and this attempts to explain why the producers made certain choices.

The Meat of the Music—Composer Bear McCreary’s score serves to set the mood and heighten the tension. Here you get a glimpse as he attempts to create music that calls to mind an earlier era in horror, especially the classic string scores of Hitchcock.

Fire on Set—The location of Hershel’s farm is of great importance to season two. The setting needed to provide a façade of safety, as well as have a particular look. When the production found the perfect place, all that was missing was the barn, which they build, aged, and subsequently burned to the ground.

The Ink is Alive—Kirkman digs into the ways he likes to use the show to screw with the expectations of his readers through the series, and why the show keeps certain elements from the source material, while changing others.

The Sound of the Effects—The visceral, gruesome sounds of walkers chowing down on intestines don’t magically appear on the soundtrack. Foley artists on “The Walking Dead” meticulously create each and every sound. From an undead cannibal feast to every individual footstep, it is all recorded in a studio after the fact.

In the Dead Water—One of the most memorable moments in season two is the walker who gets trapped in a well. This featurette explores how they created the gory effects for that zombie, including a massive well set constructed just for this scene.

You Could Make A Killing—Greg Nicotero’s stamp is all over “The Walking Dead”. At various times he’s served as make up and special effects coordinator, 2nd unit director, director, executive producer, and more. All of the hats Nicotero, a student of George Romero, wears are explored here.

She Will Fight—Andrea’s transformation from victim to tough-as-nails warrior is the subject of this feature.

The Cast on Season Two is exactly what it sounds like.

Extras Wardrobe—You get to watch costume designer Eulyn Womble dress the heavily made up extras on set. She even gets to improvise outfits for walkers that are supposed to be badly burned.

There are full-length commentary tracks on five episodes, as well as the webisodes and all of the deleted scenes. Show runner Glen Mazarra attempts to justify why all of these scenes were cut. Some he makes a convincing argument, while other times he sounds like he’s talking out of his ass. Various members of the cast and crew pop up on these tracks, and they hold a wealth of behind-the-scenes information and stories from the Georgia set.
Posted by Brent McKnight at 7:26 PM

Nice review, you had a lot of good analysis and details. I thought that the second season was a little boring when it aired, but I actually enjoyed it a lot more when I got to watch the episodes back to back. I rented the Blu-Ray set through my Blockbuster @Home account, and got some friends and coworkers from Dish together to have a TV party. I was pleased with the Blu-Ray quality, but not overly impressed. I think that renting it was the right idea because the majority of the season is story focused and not really great for watching over and over.