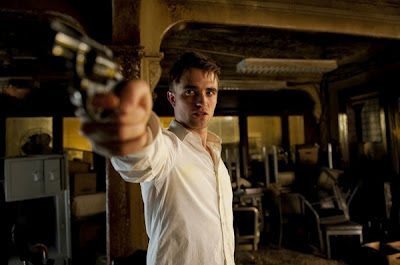 “Cosmopolis” is an interesting movie for a number of reasons. First and foremost is director David Cronenberg. That will always be a selling point. Second, it’s based on a Don Delillo novel, and while I have a hot and cold reaction the man’s work (loved “White Noise”, hated “Underworld”), his books are usually thought provoking at the very least. Finally, the film takes on a topic very much in the public eye, the current financial crisis, and with a strong anti-capitalist stance, it presets a viewpoint that you don’t often find in mainstream cinematic culture. While all of this is nice—that they’re trying to make a film that’s unique, that has a message—“Cosmopolis” isn’t a very good movie, and fails on a narrative level.

The plot is simple. 28-year-old billionaire Eric Packer (Robert Pattinson) wants a haircut. He climbs into his custom-built stretch limo for the ride. Only the president is in town, rat-throwing protestors pack the streets of Manhattan, and his journey is delayed at every turn. The remainder of the film is a series of vignettes, most of which take place inside of the limo, where a character shows up, has a deep philosophical conversation in a stilted manner like no real human being has ever spoken, then leaves again, rarely to be seen. Ostensibly these are business meetings, momentary sexual encounters, and a medical checkup, but they pretend to be so much more. In fact, the only characters that appear more than once are Packer’s wife, Elise (Sarah Gadon), and his head of security, Torval (Kevin Durand).

Over the course of the day, Packer’s fortune rapidly slips away. He made a bad investment, betting against a foreign currency, though you begin to suspect that this choice was intentional. The money, like everything else, is virtually meaningless to him, and you come to believe that he was complicit in engineering his own fiscal downfall.

“Cosmopolis” is a frustrating movie to watch. You get the point. Packer has everything, money, power, sex, a sweet car that literally serves as a shield against the outside world—New York City rages on outside, never touching the man within—but it is all empty. Everything is meaningless. The pace drags on and on, and the film, like the car, never really goes anywhere. You wait and wait and wait, like you’re on this cross-town ride with Packer, but you never budge. You feel stuck and claustrophobic; you just want to make some forward progress, but you can’t.

There are a handful of interesting moments in “Cosmopolis”. Protesters barge into an upscale restaurant, ranting and raving, and fling dead rats at the patrons, and dreamlike demonstrations seethe on the streets. Packer gets an in-limo rectal examination. Violence erupts in a sudden burst, but the moment is completely isolated, and exists in a vacuum, with no connections. Nothing leads up to the event, and nothing happens as a consequence. And in the end, that’s the whole film in a nutshell: a series of events with only the most tenuous of causal threads linking them together that ultimately goes nowhere. It is part of a gradual escalation of strangeness on Cronenberg’s part, though the effect never amounts to much.

“Cosmopolis” almost redeems itself in the final scene, where Packer is lured into a confrontation with a former employee, and would be assassin, Benno Levin (Paul Giamatti). Giamatti’s schlubby over exuberance plays well against Pattinson’s restrained indifference. They’re pointing guns at each other, but you feel like they could be gesturing with coffee mugs. This bit of bizarro theater is vintage Cronenberg, but so much of the film falls flat, that it doesn’t accomplish anything.

A tangled mess of subplots that are not only left blowing in the wind, but that are barely started and only hinted at, “Cosmopolis” is ponderous and self-important. The film rambles on, aimless and rigid, but like I said, there are some curious bits. However, the leaden pace, dense ideas, and inane philosophical tangents bog the movie down. You don’t care about any of the secondary characters—in reality they’re flat representations of specific points of view rather than actual characters—and it’s difficult to worry about Packer, a bored rich kid playing a game, any more than he worries about himself, which isn’t much.

At one point Packer asks, “What does it mean?” It’s exhausting trying to wade through a movie where every statement is delivered like a treatise. Life, death, sex, money, murder, what does it all mean? In the end it means nothing. And like I said at the beginning, while “Cosmopolis” may present some interesting theoretical points, it isn’t a very good movie.
Posted by Brent McKnight at 9:25 PM

Wow, all I’ve heard is good things about Cosmopolis. Then again, all these good things were told to me by one of the girls I work with at Dish who has her desk decorated in pictures and magazine cutouts of Robert Pattinson. She said that it would be a movie that I might want to watch twice in order to understand it, but after reading this review, I’m not sure that I could die of boredom twice in one night. I’ve already added it to my Blockbuster @Home queue, and they emailed me that it should arrive by tomorrow. I will give it a shot, but I can’t say that I’ll watch it twice – lol!