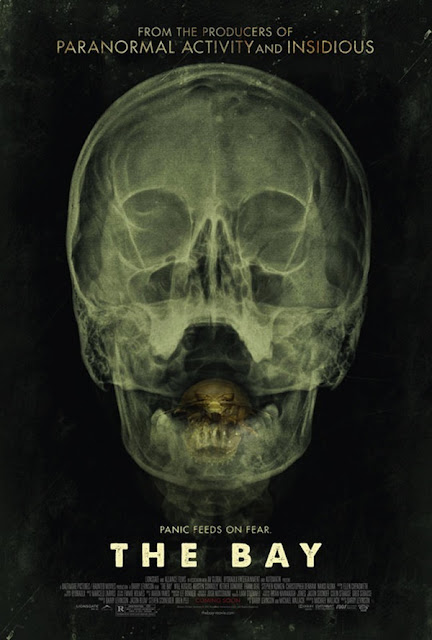 Going into Barry Levinson’s new horror film, “The Bay”, you get the feeling that it could either be something really special, or fall flat on its face. The concept is certainly strong enough. A creepy creature infestation, unexplained fish/wildlife death, and a government cover-up, what’s not to like? On the other hand, this is yet another low budget found footage picture, and these are, at best, a hit and miss proposition to begin with.

Not only is “The Bay” a found footage joint, it is made up largely of video shot from camera phones, tablets, handheld video cameras, and the like. While that sounds interesting on a theoretical level, the idea of a full-length motion picture cobbled together from this sort of artifact is worrisome, and leaves something to be desired. So it is with some trepidation, but also some level of enthusiasm that we take that first step down this dark and winding path.

In the end the one thing that truly dooms “The Bay”, the element that really trips up the entire movie, is found footage aspect of the thing. It is flawed at a very conceptual level. From a creepy scheme, to a nice story about an extensive and involved cover-up of an environmental catastrophe and ensuing outbreak, the building blocks are in place to create an effective, successful horror movie. Except for the fact that half of the movie makes you want to vomit, and not in a gross, gory way. This is a motion sickness kind of vomiting we’re talking about, not a holy-crap-that’s-so-nasty puke fest.

There is no reason—except for the fact that Oren Peli, who gave us the “Paranormal Activity” franchise, produced the film—that this exact same story, with the exact same structure, couldn’t have been told using traditional narrative means. You could have even kept some of the instances of the discovered footage. There are only one or two moments in “The Bay” where this stylistic choice gains you anything. A young girl, sick, alone, abandoned by her parents at an overburdened hospital, video chats with a friend on her cell phone. This one instance is the most poignant use of the form. Following her story in this manner, and the videos of a pair of oceanographers who predicted the epidemic months earlier, are the only times when the visual approach actually benefits the finished film.

The set up is simple. On the Fourth of July, 2009, there was an incident in the small Chesapeake Bay town of Claridge, Maryland. Not until three years later is all the digital media of that fateful holiday, which was confiscated, finally released. In what is tantamount to a voiceover, Donna Thompson (Kether Donohue), who was a student reporter at the time, walks you through the events as they unfold over the course of a single day. What initially plays like a murder mystery, turns out to be something much larger, a plot that reaches much further, and has more dire, widespread consequences. Hence the cover-up.

I’m not a hater of found footage movies by any means. They can be quite good. “Trollhunter”, for example, is a fantastic movie, and “Sinister” uses elements of the genre with nice results. But with this offering they’re not doing anything new or particularly interesting, and the result in “The Bay” is a subpar movie that could have been quite good. Even when the frame is not whipping around in a frenzy, or bouncing up and down as a character runs around town, the picture is blurry and grainy, and the whole movie feels out of focus. By using webcams, security footage, and home video, the whole movie looks like it was filmed off of a TV using a camcorder.
Posted by Brent McKnight at 9:29 PM