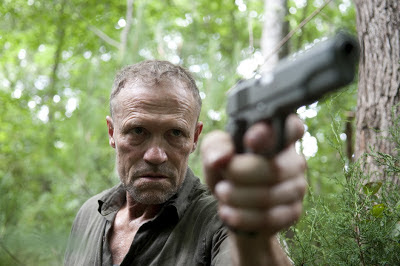 When last we left Rick Grimes (Andrew Lincoln) on AMC’s “The Walking Dead” he had just picked up a telephone. And that’s how he spent the vast majority of last night’s episode, “Hounded”. Seriously, he was like a teenage girl this week, either ear glued to the receiver, or frantically checking to make sure the phone still works, waiting for the-most-important-phone-call-ever.

It should go without saying that there are major SPOILERS contained within. So if you haven’t watched “Hounded”, stop reading unless you want a lot of things ruined for you.

Sure, you wanted to know who was on the other line, but fans of Robert Kirkman’s comics already knew. A lot of people have bemoaned this gimmick as one of the stupider devices from the source material, and while I’m rather middle of the road on the subject—don’t love it, don’t hate it, just kind of meh—it feels like the show wanted to get it over and done with and out of the way.

In the comics the phone bit happens much later. Everything is in ruins, Rick and his son Carl are alone, they’ve been through the ringer physically and emotionally, they hunker down in a house for the night, and the phone rings. In reality it kicks off to the next arc. It plays out over a couple of issues—the bulk of it anyway, Rick still carries the phone with him—while from the look of things, it may be mostly done in the show. Could be wrong, but I think they used it for what they needed, and are moving on.

From the second it is explained that the voice in the receiver is in a place “safe from them”, it is obvious that he is talking to the afterlife, or at least his mind’s conception of such an idea. It’s a heavy-handed tactic, and a bit of a cop out so Rick doesn’t have to deal with his grief or emotions, and that apology to Lori is so forced and melodramatic that it lacks any sincerity. That whole thread is very paint-by-numbers.

So that’s what Rick did. And that’s about as interesting as his thread got in “Hounded”. Fortunately for us, everyone else had a busy week. Season three continues moving along at a nice clip, pushing forward towards the impending clash between Rick’s group and Woodbury.

Daryl (Norman Reedus) and Carl (Chandler Riggs) had an earnest moment while clearing the prison. That’s one of the great things about Daryl; he doesn’t talk down to Carl. They’ve been through enough battles together that he respects the boy enough to approach him like a man. It’s the kind of moment that Rick should be having with his son, if he weren’t too busy being completely self-absorbed and moping around like a sad high school goth kid. I half expect him to start wearing a lot of black and writing bad poetry.

Are father’s out there super pissed off at Rick for abandoning his son (not to mention his newborn daughter) in a time of need? I don’t even have kids and I want to slap the shit out of him.

I’m glad that they find Carol (Melissa McBride) at the end of the episode. You suspected as much was coming since you didn’t see her die and no one saw her corpse. Kudos to “The Walking Dead” for not dragging it out like the search for Sophia in season two. That’ll provide some fertile emotional ground for Daryl. Whatever the nature of their relationship, the two are very close. Maybe this scenario has given them pause to examine their feelings for one another.

Andrea (Laurie Holden) and the Governor (David Morrissey) finally get it on in “Hounded”. We saw that coming a mile away, and while this change from the source material leaves me tepid and indifferent, it could pay dividends down the road. Now you can bet she’ll be pulled in multiple directions when her old pals show up at the gates of Woodbury. Will she be happy to see familiar faces, or will she be pissed at being abandoned and left to die? Will she see Woodbury and the Governor for what they are, or will the blinders remain firmly in place? Which side will she choose?

That’s going to be a big question for Daryl, too. How will he react when he sees Merle (Michael Rooker) alive for the first time since Atlanta? The brothers are similar in that they’re both shit-kicking redneck badasses, but they’re different in all the key ways. Merle is a murdering, racist, psychopath, always playing an angle, while Daryl, not afraid to get his hands dirty from time to time, is an earnest friend, willing to do what needs to be done regardless of the risk to himself, and really just a stand up dude. I don’t doubt that in the end he’ll choose the group over his kin, but that doesn’t mean it will be an easy choice. Daryl is the more introspective of the Dixon brothers. Merle on the other hand has discovered his true purpose in the wake of the zombie apocalypse. Some men find themselves after disaster, and he is having a damn fine time wallowing in the end of the world.

“Hounded” really sets the show up to bring the prison and Woodbury together. At the beginning of season three, I was worried that they were going to rush into the conflict to the detriment of the larger story. This is the one story element “The Walking Dead” is drawing out this year, and for the most part, the way they’re going about it is successful, creating tension, and laying the groundwork for one hell of a payoff.

By the end of the episode Glenn (Steven Yuen) and Maggie (Lauren Cohan) have been abducted, Michonne (Danai Gurira) shows up at the prison after conveniently hearing the young lovers mention it in conversation, and now we’re on a fast track towards conflict. With every step the collision between the two bands of survivors becomes more and more inevitable.

As much fun as it is to have Merle back in the fold, I have issues with his presence. Yeah, there are a number of huge coincidences so far in season three—apparently in the span of eight months no one really strayed very far from where they started out—and he is one of those. Merle, coupled with the Carol revelation, just proves that unless you physically see someone die on “The Walking Dead”, they’re coming back for more.

And I hate to go back to “in the comics” again, but we’re doing it one more time. In the comics the Governor is a sadistic bastard. He brutally and repeatedly rapes and tortures Michonne (you can’t help but wonder if the same fate is in store for Maggie now that he has her in his clutches), cuts off Rick’s hand, and is generally one sick puppy. For all practical purposes, the show has split his personality in two. Morrissey’s Governor is primarily the public persona, the façade of the politician. Granted he has a sinister bend, with his zombie daughter and aquariums full of severed heads, but Merle has taken on the vicious, violent side of the character.

All of what Merle does—slaughtering the National Guard troop, hunting down Michonne, the implied torture—are all things the Governor does in Kirkman’s comics. It makes him that much less villainous. As it stands, he is just a guy doing what he has to in order to keep his people safe. Even the gladiatorial spectacle of the fights, brutal as they are, serves a purpose as collective catharsis. And no one really gets hurt—at least not yet, we’ll see how it plays out. He’s done terrible things as leader, but so has Rick. His actions have largely been dictated by necessity, not plain old meanness.

Still, for all the flaws and potholes, season three of “The Walking Dead” is becoming the show that many of us wanted it to be. I approached this season as a make or break proposition. Going in, I decided that if it continued like the second installment—wildly inconsistent, painfully long-winded and indecisive, and too often bland and boring—I would have to walk away. It had grown too frustrating to tune in Sunday after Sunday only to be disappointed. Thankfully the show has made changes, and each new episode has been compelling, fast-paced, and a damn lot of fun.
Posted by Brent McKnight at 11:37 AM