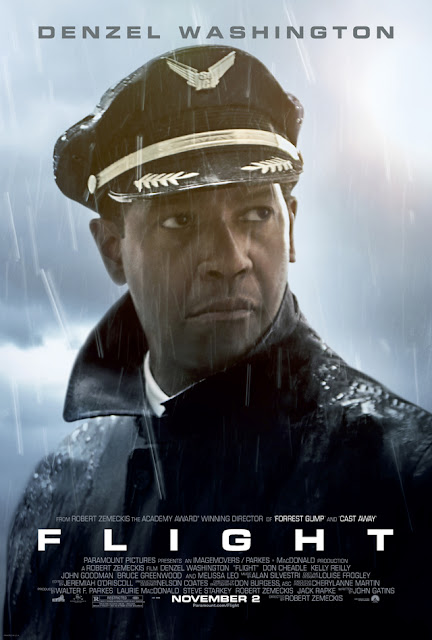 “Flight” is less a movie about a plane crash, as you’ve been led to believe, than it is about a man facing off with his own personal demons. In this story those demons take the form of a severe battle with alcoholism. At its best, “Flight” resembles a cleaned up version of “Leaving Las Vegas” with airplanes. At the other end of the spectrum, the film is like a made-for-television cautionary tale about the evils of drink and excess, one that is just a little too clean, a little too easy and rosy-cheeked to ever truly get to the point it sets out to make. What keeps “Flight” from devolving into a full-fledged Lifetime melodrama are a strong beginning and Denzel Washington’s performance.

The first two things you see in the film are a half empty tumbler of some unidentifiable liquor sitting on an end table, and a close-up shot of a nipple. That right there sums up the daily life of “Whip” Whitaker. When he’s not throwing back cocktails and banging flight attendants in anonymous hotel rooms, he snorts rails of cocaine to get himself right for his day job, piloting commercial airliners. A former Navy jock, Whip is a cocky smooth-talker, holding a microphone in one hand so he can address his passengers, while his other dumps airplane shooters of vodka into bottle of OJ, his preferred in-flight beverage.

Whip is lit to the gills in this manner when, mid-flight, all hell breaks loose. His plane begins to disintegrate around him, and in order to avoid a fiery death for all on board, he pulls some spectacular feats of derring-do out of his ass, setting the plane down in a field. Instead of 102 deaths, his actions save the lives of 96 of the souls on board. It should be said, the chaos and the crash had nothing to do with Whip’s level of intoxication. That’ll be an important plot point later on.

Up until the point where Whip wakes up in the hospital, and actually a bit beyond that, “Flight” is a solid, thrilling adventure. The plot is set up well, the pacing is right on, tension abounds, and the crash scene is remarkable. An easy route would have been to show this as a big special effects piece—which the film does, but not until later—but first director Robert Zemeckis (“Forrest Gump”) shows the incident from an internal perspective, and does a nice job of putting you there in the plane. And when he does finally reveal the crash from the outside, it is through a slow motion home video of the incident that has a dreamy, unreal quality to it.

After Whip leaves the hospital, where he has a chance encounter with Nicole (Kelly Reilly), a junkie, and a cancer patient played by James Badge Dale (one of the highlights of the movie), “Flight” takes a heavy-handed approach to confronting Whip’s drinking. This is where the film starts coming apart, much like the plane. His addiction is already well-established—recreational drinkers don’t pour themselves a screwdriver as they sit down at the controls of a jumbo jet. After a brief wrestling match with his affliction, the pressure of notoriety, and the microscope placed on him by the media and the government, are too much, and Whip starts a deep down cycle. This is largely portrayed through moments of Washington pounding booze behind the wheel of a car. At one point he swigs off a half-gallon bottle of Stoli, chasing it with the half-rack of Bud sitting shotgun.

Before his drinking was woven into the larger picture, but all of a sudden that’s all the film focuses on. Continually beating you over the head defeats the purpose. He may fool people around him, and even himself, but the lack of subtlety and repetition gets old. Whip goes through all the typical addiction movie clichés. He meets a nice girl who cares for him and sees the good in him, only to screw it all up. There’s the moment where he attempts to revisit his marriage, ruined long ago by his boozing. You’ve seen that, and know how it goes. And finally, he burns the last bridges he has left, alienating the only people in the world who might help him, or even give a shit if he lives of dies.

Washington is the only thing keeping “Flight” from turning into a generic pile after the crash. There’s something intrinsically engaging and magnetic about him—he resembles Tom Hanks in this way—and, no matter how bad a movie is, you just want to watch him. There are some nice back and forths with Don Cheadle as a slick, high-priced lawyer trying to keep Whip out of prison for manslaughter. John Goodman turns up as a sort of drug-dealing life coach figure. They do what they can with what the have, but John Gatins’ script doesn’t give them much to work with other than a flat story and bland supporting characters. You’ve seen it before, and while “Flight” isn’t terrible, it’s just too easy and clean. After a compelling start, it fades into mediocrity.
Posted by Brent McKnight at 10:02 PM