Now out on Blu-ray and DVD, Ben Affleck’s thriller “Argo” is one of the most acclaimed movies of 2012, and has been cleaning up on the awards circuit so far this season. In fact, from all the indicators, analytics, pattern analysis, and weird little statistical factors that no one in the real world actually cares about—think of it as the Hollywood version of Sabermetrics—and a lot of people expect a big payday when the Academy Awards roll around in a couple of weeks.

“Argo” is certainly the most fun movie up for the Best Picture Oscar (“Django Unchained” is the obvious runner up). Despite a weighty topic, not to mention a dire set of consequences for the characters, the fact-based film watches like “Ocean’s Eleven” or another film of that ilk. The story centers around a group of American embassy workers left stranded and hiding in Iran in 1979 after anti-US protestors overrun the building and take the rest of the staff hostage.

Costumes and sets from the era are spot on, and Affleck, who also plays the lead, CIA agent Tony Mendez, oozes sexy 70s machismo and angst out of his perfectly manicured beard and luxurious mane. The entire film plays out like a jaunty period caper. There’s the set up, the planning stage, and the ultimate execution, an ingenious scheme where Mendez flies into Iran and the hostages, stashed in a Canadian ambassador’s home, are all supposed to fly out under the guise of a film crew scouting locations for a low-budget science fiction film called “Argo.” It is a brazen, ballsy move, but the second best idea involves the “House Guests” riding bicycles hundreds of miles across the border.

Much like the plan, the devil is in the details of “Argo.” They couldn’t pull off a stunt like this unless every minute piece of the puzzle is in the proper position, and neither would the movie be successful. In reality the world is small place, so the CIA enlists the help of entertainment industry players Lester Siegel (Alan Arkin) and John Chambers (John Goodman) to establish that their project is in the works. No one will believe a film crew is scouting locations if they don’t first believe that there is an actual movie in production. So the CIA commissions a script, rent office space, take out ads in Variety, and stages a launch party, everything you would do for a real Hollywood movie.

This is where “Argo” is at its best, laying the groundwork. Goodman is great as always, but Arkin operates so far above everyone else in this movie that he becomes the focal point every time he open his mouth. Out of all of the awards “Argo” will likely line up on the mantel, Supporting actor is the one it most deserves. After the frame is built, the plan is set in motion, and the tight pace and constant tension zip you along towards one of those finales where, once it’s over, you realize that you’ve been leaning forward and forgot to breathe.

I wouldn’t call “Argo” one of my favorite movies of 2012, and I didn’t even put it on my top ten list for the year—though it was close—but it’s still a damn fine motion picture. Most of us don’t normally think of the 1970s as a period piece, but it really is in this case. The film relies on the specific historical epoch to establish the tone and mood of the piece. Most of the peripheral characters, including the hostages, are flat and undeveloped. They’re present because they were actually there in reality, but they’re interchangeable, bland, and for all intents and purposes, they serve the exact same function and have little personality to call their own.

The scope of the home release matches that of the movie itself, and is comes with a ton of bonus features. Most of them deal with the history of the event. Three in-depth documentaries—ranging from six to 45 minutes in length—examine various facets of the uprising, the taking of the embassy, and the ultimate escape of the House Guests. One is full of interviews with all six of the visitors, Tony Mendez himself, the Canadian ambassador, and even President Jimmy Carter. All of these people turn up, as well as Affleck, Goodman, and a handful of other actors and producers, throughout the other docs.

Another feature details the plan, known as the “Hollywood Option,” how it came to be, what other choices there were, and how the CIA sold a fake movie. Affleck, himself a Middle Eastern Studies major in college, was a stickler for accuracy, and another doc film shows how he sought out that goal and achieved it. This includes elements like having all of the House Guests live together for a time before filming in order to create genuine feeling interactions.

Hollywood’s role is the escape is also examined in greater depth. John Chambers was not only known as the award winning creator of make up effects for movies like “Planet of the Apes”, but also did work for the CIA making prosthetics to help assets escape from sticky situations.

The two gems in the “Argo” Blu-ray crown are the commentary track with director Affleck and writer Chris Terrio. If you’ve ever sat down with an Affleck commentary track then you know they’re solid, and a good balance between interesting behind the scenes information and insight into the film. This one is no exception.

A Picture-In-Picture feature also plays along with the movie, and is something like a historical “Pop-Up Video.” As you watch the movie, interviews with the survivors come up, adding their actual stories into the narrative. There is a lot of overlap between these and what appears in the previously mentioned extras, but witnessing them along with the finished film provides a rare look into a story that remained classified for 17 years. 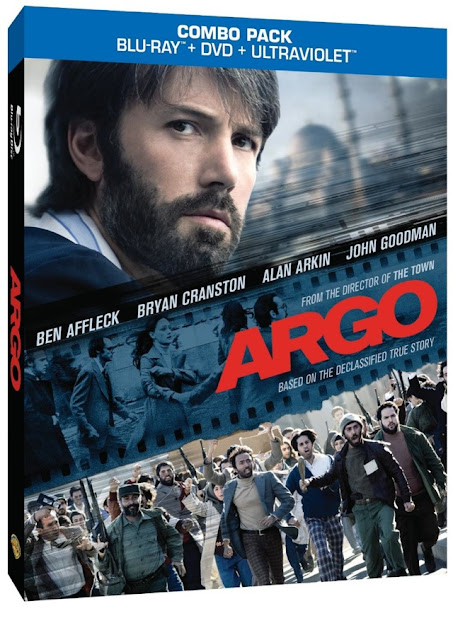 Posted by Brent McKnight at 8:54 PM