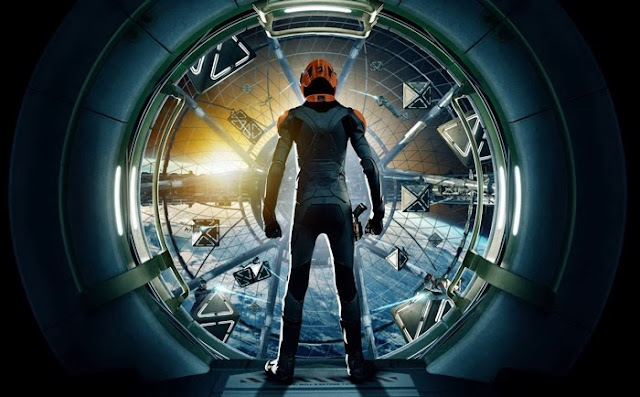 Based on Orson Scott Card’s much loved, much debated, sci-fi novel, many fans of Ender’s Game worried that Gavin Hood’s adaptation would take liberties with the source material and turn the story into a big, empty action spectacle. Those fears have mostly been assuaged, as Hood, who also handled the scripting duties, turns in a film that dwarfs his last movie, X-Men Origins: Wolverine, in both scale and quality. There are times when you feel like you’re watching a real classy Starship Troopers.

Ender’s Game follows the plot of the notoriously unfilmable novel more or less point by point. There are wide swatches of the book absent from the film, most notably the arc where Valentine and Peter become anonymous political pundits, but these omissions don’t have much direct impact on the main narrative thrust of the story. In fact, Peter (Jimmy Pinchak), the protagonist’s vicious older brother, barely figures into the film at all, while, in this limited time frame, the connection between Ender (Asa Butterfield) and Val (Abigail Breslin) may be the clumsiest element of the film.

Ender is a third, a third child in a future where two is the legal limit. Years ago, the world was attacked by an alien race called Formics. Humans won the day, but it was costly, and to prevent this from happening again, the military scours brilliant young minds in search of the next great commander. Ender is the most promising recruit Colonel Hyrum Graff (Harrison Ford) has ever seen. A gifted tactician, the boy strikes a balance between his sister’s compassion and his brother’s cruelty, retaining Val’s capacity for empathy and Peter’s propensity for violence. Ender can be ruthless when he needs to be.

The first two-thirds of the film follows Ender through his time at Battle School, an orbiting military academy where recruits are put through their paces. This portion of the film is fine, but comes across as rushed. Scenes of the cadets engaged in training exercises in the zero gravity Battle Room are as spectacular, both visually and technically, as fans hoped, and, at times, resemble the peak of John Woo’s Hong Kong bullet operas, only in space, with no gravity. Still, this is all surface. You move at such a rapid pace you never dig into the heart of the matter, and the moral questions raised are simply presented and shuffled off as Hood tries to fit in all the details. Graff wants to push Ender to his limits, to isolate the boy, frustrate him at every turn to see how he reacts, but you never quite feel the pressure that you need to. Sure, he struggles to find his way, to make a place for himself among the bullies and cold shoulders, but the stakes are more high school than survival of the human race.

Where the film really delivers on its promise is in the third act, where most of the issues from the earlier portion fix themselves almost on their own. Ford, who has been one grim note up to this point, imbues his character with a sense of, not only purpose, but you also realize, for the first time, that he does what he does out of a concrete sense of duty, not just because he’s a mean, drill-instructor asshole. You begin to see the consequences of pushing kids this way as Ender begins to crack, and this allows the film to explore the inherent moral and political questions, like using child soldiers, preemptive war, and the win at all costs approach, with more force. As you watch Ender attempt to wrap his brain around the problems in front of him, you truly, and for the first time, connect with the kid.

It could have come sooner, but Ender’s Game gets there in the end, leaving you to work out the answers for yourself. And holy shit, what a last fifteen minutes. Hood presents the climactic action in such a way, having dropped enough hints along the way, that you should be clued into the truth of what’s going on. Watching the action unfold is visually and emotionally impressive—Hood also found a way to turn the relatively subdued action of the book into slick big screen pyrotechnics—and even if you’re aware of what’s coming, the key reveal sucks the air out of your lungs. It’s an impressive end to a solid movie.

Ender’s Game is far from perfect, but the film improves as is progresses, and ends when it is strongest. Most of the cast is completely underutilized. Viola Davis has a couple of nice moments attempting to give Graff a moral compass, but that’s about it. Hailee Steinfeld’s Petra, perhaps Ender’s only friend in the book, gets short shrift. Aramis Knight’s Bean—raised on the streets, not worth a bean—is little more than a collection of knowing nods. Most of Breslin’s screen time is as an animated version of herself in a videogame that resembles that creepy motion capture from Polar Express. Moises Arias as Ender’s Battle School Rival, Bonzo, is the lone shining moment among the bit players. A pipsqueak with a big ego, Arias is clearly having a blast.

Even with all of the big issues raised about the nature of war, the emotional core of the story is about misfits, weirdoes, and outsiders trying to find a place to belong. Ender’s Battle School unit, Dragon Army, is comprised of nothing but rejects, and he molds them into cohesive team. This is really the sad irony of the book and movie, that Orson Scott Card has crafted a moving tale of inclusion and struggling to find a place to be yourself and belong, while he has spent so much time preaching the opposite as a staunch opponent of gay rights. He is so vehemently anti-gay that many groups have organized boycotts of the film.

Despite his unfortunate stance, many in the gay community who have embraced the book over the years, seeing a mirror of their own struggle in its pages. Ender has even been interpreted as a gay character—D.E. Wittkower and Lucinda Rush’s recent book Ender’s Game and Philosophy, contains a chapter titled “How Queer is Ender.” For their part, Summit Entertainment has done what they can in the way of damage control, staging LBGT benefits and encouraging discourse, but regardless of the success or failure, the cloud of Card’s views will always loom over an otherwise worthwhile film.

Card reportedly won’t see any additional money from the film—his commission was paid via an old deal that includes no additional fees—but this brings you back to the debate about whether art exists separate from the artist. Once someone creates an artifact and releases it out into the world, does it take on a life of its own, or are the creator and created inextricably linked forever? This is a big, endless topic that has been, and will continue to be, argued by people way smarter and more insightful than me. When I first read Ender’s Game I had no inkling of what Card was all about. Had I picked it up for the first time today would what I know now color my perception?

Posted by Brent McKnight at 7:42 PM