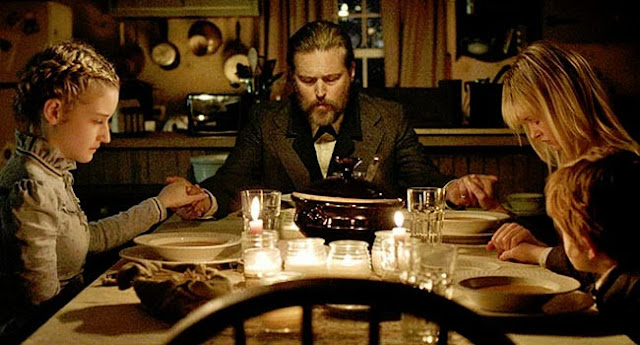 “We Are What We Are” just may be the artiest backwoods cannibal movie you’re likely to find. Don’t worry, though, because as much as director Jim Mickle (“Stake Land”) does to pretty things up in his remake of the 2010 Mexican horror joint of the same name, there is still more than enough gore, brutality, and creepiness to sate your bloodthirsty little soul. Moody, tense, and delicately layered, when you boil it down to the bare essentials, this is still the story of an isolated, woodsy family eating folk.

The Parker family lives in rural New York State. You know right away that there is something off about them, but you chalk this up to the fact that they live the woods, generally keep to themselves, and adhere to a strict religious regimen that includes fasting and not going to the doctor. When mother Emma (Kassi DePaiva) has a stroke and dies during a severe storm that threatens to flood their small town off the map, it leaves the eldest daughter Iris (Ambyr Childers) to take care of stern, devout father, Frank (Bill Sage), younger sister Rose (Julia Garner), and their small brother Rory (Jack Gore).

Now this may be a small town, but for a tiny burg, there happen to be an awful lot of lone women disappearing. Strange how that happens. The town mirrors the Parker themselves. On the surface they may seem a little strange, but they look like harmless, decent folks. And after all, they did just endure a horrible tragedy, so a little standoffishness is to be expected. It should be apparent, however, that this appearance masks a deep dysfunction, like a “Texas Chainsaw” level of dysfunction. Mickle creates a heavy atmosphere of gloom that immediately plants the seed that sinister doings are afoot. You don’t have to wait too long to learn the specifics—young Rory stumbles across the prisoner dear old dad keeps chained up in the dirt basement of the shed that only he is allowed to enter—but the deep seeded nature is something else entirely.

Like many excellent horror movies before it, “We Are What We Are” takes a broad swipe at religion. Not aimed at any specific belief, group, or culture, the Parkers are set up to illustrate the folly of blind acceptance and adherence to any single viewpoint or dogma. It’s not a huge leap to extend this to the political realm if you like, but here the intention is to show the manipulation of the young and innocent. Though she yearns of something more, Iris dutifully accepts her new role as caretaker of the family because that is their way, their tradition, even when it comes with horrific duties and a less than healthy relationship with Frank.

Rose, on the other hand, is more overtly rebellious. Another step removed from convention, she sneaks Rory handfuls of cereal when he is supposed to be fasting, and talks to her sister about what life would be like if they were normal. The Parkers live like this because it is how they have always lived, a point illustrated through a series of journal entries that take you back to the pioneer days. In their present incarnation, given the current state of the world, upholding the traditions and keeping the family together is increasingly difficult.

Mickle brings ideas of family and duty into the equation, raises questions of nature versus nurture, and questions what we’re clinging to when we hold onto the past. Frank is the physical embodiment of his decaying way of life. As the world around him erodes, in both a physical and metaphorical sense, so do his family, his psyche, and his body. In his children, all of whom deliver fantastic performances, you see a progression. Iris is devoted, but torn. Rose has a deep connection to her family, but has seen the allure of a life beyond their simple, remote existence. Rory is young enough that he still accepts the way things are on faith, but you have to wonder how much farther he will pull away as he ages.

Try as he might, Frank can’t stop the outside world from chipping away and invading his own. Neighbor Marge (Kelly McGillis) has good intentions, only wanting to help in the wake of tragedy, but is a constant nuisance. Local deputy Anders (Wyatt Russell) and Doc Barrow (the always great Michael Parks) offer a more overt intrusion and threat.

Beautifully shot, using keen visuals to represent the dense themes, “We Are What We Are” is full of great acting and rigid tension, and—despite the fact that you have a general idea of what is coming—packs in a few solid shocks. If nothing else, Mickle’s film is an illustration that you can tell a crazy exploitation style story in a meaningful, substantive way.

Posted by Brent McKnight at 7:47 PM