Almost exactly a year ago (okay, it’s been a little bit longer, this was meant to be done way, way earlier), Pete Travis’ ultraviolent comic book adaptation Dredd fell on its face harder than Rob Schneider in that video you just watched. Dropped into the notorious dead zone that is late September—it’s netherworld between summer blockbuster season and fall/winter awards fishing season—this is a movie that did practically no business at the box office. Even with a relatively modest budget of $50 million—which is practically nothing when it comes to a comic book movie anymore—the film only grossed $13 million in the US, for a total of $35 million worldwide.

This is a sad state of affairs, because the movie is fucking awesome. It’s the grim, gritty adaptation that fans of John Wagner and Carlos Ezquerra’s Judge Dredd comics have been waiting for, even since before Sylvester Stallone cheesed up the stone-jawed badass back in 1995. So why did it fail so egregiously?

2012 had a little bit of everything for sci-fi fans. The Hunger Games brought a touch of teen angst to dystopic future; the likes of Looper and Cloud Atlas were full of big ideas that defy easy interpretation; Prometheus built up, and ultimately let down, our collective expectations; and smaller films, like Safety Not Guaranteed, Earthbound, and Robot and Frank, brought esoteric indie flair to the genre. Dredd, for its part, added a much appreciated boost of ass kicking and adrenaline to the proceedings, but still tanked.

This doesn’t mean people didn’t like the movie either. Critical reception was almost entirely positive—the film holds a 78% Fresh rating on Rotten Tomatoes, which isn’t half bad—and when it hit the home video market, Dredd moved a staggering 650,000 units the first week. Given this groundswell of support, which currently includes a substantial online petition to coerce the studios into a sequel, why did audiences stay away? There is a litany of potential reasons.

Though Judge Dredd first appeared in 1977, and has been passing judgment on the villains of Mega City One ever since, the title has never garnered the widespread mainstream recognition of its DC and Marvel counterparts—though at this point crossover success probably won’t hinder Guardians of the Galaxy next year. Just because a film is based on a comic book doesn’t guarantee automatic success anymore. Look at The Shadow, The Phantom, or Daredevil for proof of that.

Was it too violent? Dredd is as hard an R as they come—those super slow motion shots of bullets passing through bad guys, and skinless bodies being dropped from hundreds of stories, saw to that. In a world that increasingly strives for blanket PG-13 inclusion, maybe the market for brutal, foul-mouthed action, just isn’t there like it once was. On the other hand, films like last summer’s Riddick, while not a world-beating hit, proved that violent, bloody action can still turn a profit. 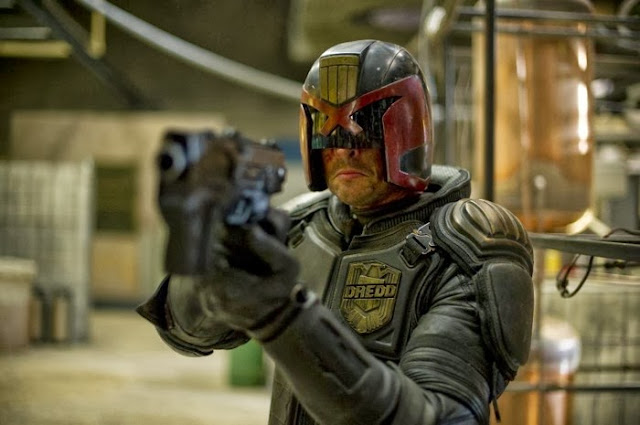 Perhaps Dredd is simply too violent for mainstream moviegoers. Shit gets rough, often. Judge Dredd first appeared in the weekly British comic rag 2000 AD, which, since its inception, has always catered to an older, more adult sci-fi readership. Judge Joseph Dredd, with his rock solid jaw, Dirty Harry-style tactics of law-enforcement, and penchant for bloodshed, found a fast home within the pages, and became a favorite among the magazine’s anti-establishment readership. But that is still a relatively narrow slice of the population pie.

The latest film stays true to the source material—like the comic, Karl Urban never removes his iconic helmet—which is great for fans, but not as many people are willing to fork over ever increasing theater prices to see a brains splattered across concrete walls or a guy get his hand blown off in graphic detail. For some of viewers, especially those prone to reading Judge Dredd comics, that’s precisely what they were hoping for. For others, not so much.

It is also a distinct possibility that there is a lingering bad taste left in viewer’s mouths after the disaster that is Stallone’s Judge Dredd. While I have a weird place in my heart for that movie, I won’t for one second argue that it’s great art, and it is, perhaps rightfully so, almost universally reviled by fans and critics alike. (Judge Dredd currently holds an 18% rating on Rotten Tomatoes.) The film is a pandering cartoon that completely guts all of the gritty toughness of the source material, something Dredd positively wallows in.

The futuristic Day-Glo color scheme of Pete Travis’ film—which somehow totally fits the dark, disturbing nature of the story, especially in 3D—may remind some of the of the unfortunate predecessor. Though previews were filled with blood, bullets, and violence, the look of the film, especially in short glimpses, has something of a misrepresentation, a candy-coated veneer that belies the violence and depravity lurking beneath.

This is all rambling speculation, and in reality there are a multitude of possible reasons why Dredd failed to find an audience at theaters. Perhaps coming at the end of another long summer movie season, which have increasingly become a near endless slog through mediocrity, viewers assumed it was an empty attempt at a blockbuster. By the time September rolls around, we’ve been so beaten and benumbed by the next weekly big thing, that you sometimes you just want to curl up into a ball and whimper instead of dragging your ass to the theater to bear witness yet another tedious Hollywood shell. Hell, maybe people are just sick of 3D—I definitely prefer watching the film in a 2D format.

Regardless of why it failed at the box office, at least the film found a home on video. The film certainly has legs, and you can bet that before long it will start popping up at midnight screening and late night shows. It is practically built specifically for such an existence.

As the outpouring of grassroots support for a Dredd sequel gains momentum, the more I think about it, the less sure I am that I want one. On one hand, I definitely want there to be enough recognition about how great the film is to warrant one, but on the other, I worry that another installment would ruin what the first film accomplishes. We have this gem, this awesome little nugget, one that we can revisit on the regular as our appetites dictate, and that might be enough.

What about you out there? Do you love Dredd? Is it one of the most unfairly overlooked action films of the last few years, or was it justifiably ignored by the general movie going public? Why do you think it flopped in such miserable fashion?