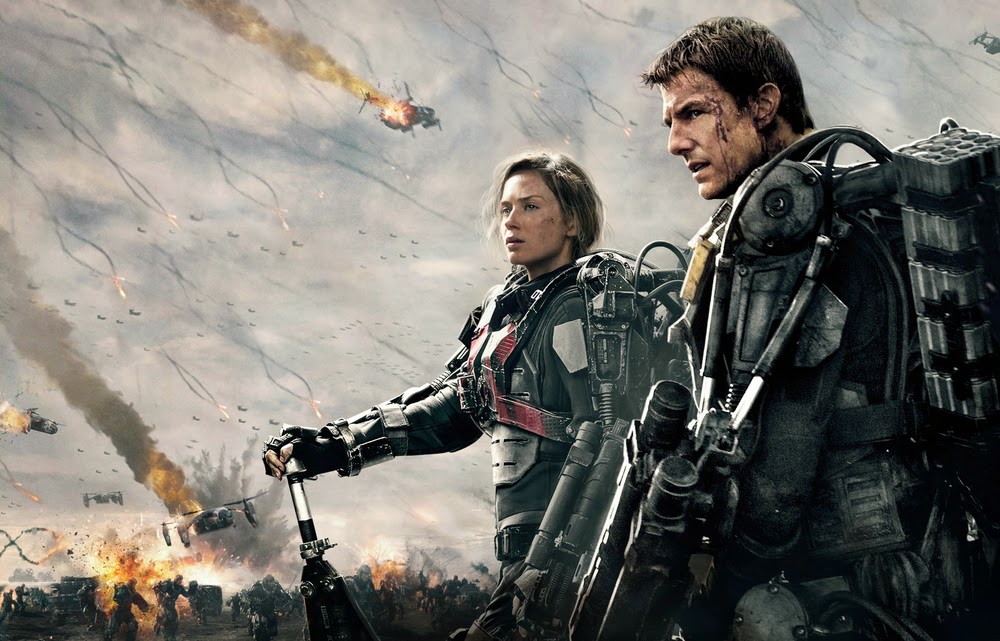 It might be premature to call director Doug Liman’s “Edge of Tomorrow” the best film of the summer. But, up to this point, this is the most fun I’ve had at the movies since “Captain America: The Winter Soldier,” and I thoroughly enjoyed the likes of “Godzilla,” “Neighbors,” and “Chef.” If nothing else, the alien invasion actioner is easy to go into with no baggage, because this is one of the few big blockbuster style sci-fi movies of the summer that isn’t part of a franchise, some kind of reboot, or focused on pre-existing superheroes. Though this is an adaptation, most of the general movie going public isn’t super familiar with Hiroshi Sakurazaka’s novel “All You Need is Kill,” or the subsequent graphic novel. The fact that we’re talking about something different is refreshing, and when you consider that this also manages to be smart at the same time it kicks ass, all the better.

In the near future a hostile alien race called Mimics invade Earth. Five years in, this battle has become a truly global effort. The war effort isn’t going well, however, but the United Defense Force has one last big piece of military action planned. Major Bill Cage (Tom Cruise) is a public relations officer who has never seen a day of combat in his entire career, but when a vindictive general (Brendan Gleeson) shanghaies him him to the front, things get even worse . Within moments of landing on the beach, in the middle of a Normandy-eque invasion, Cage gets killed. Surprise, surprise, he wakes up the morning before the invasion. Caught in a time loop, he lives the same day over and over again. When he encounters Rita Vrataski (Emily Blunt), the literal poster child of the military campaign, she knows what he is going through, because the same thing happened to her. As the days repeat, she trains him, and together they attempt to figure out how to save the day for the human race.

No matter how you feel about him, as a human being or an actor, Cruise is a perfect fit in this role. Cage is not a heroic figure, especially at the beginning. A former advertising executive, he’s the kind of smarmy asshole who has always been able to talk himself out of any sticky situation he’s ever found himself in, but this is one time words won’t do him any good. Completely inept, you feel for him as he gets railroaded, stuck into a bulky, heavily-armed exoskeleton that he’s never used before—he can’t even turn off the safety—and thrown into the grinder. He’s frantic and scarred out of his mind, and with good reason.

After he wakes up, he’s even more out of sorts. Now he knows exactly what he’s in for, and goes through the various mental stages as he tries to cope. He denies it, runs away, tries to warn people, and everything else that you can possible imagine, but nothing helps, and he meets the same end every single time. One of the best sequences of the entire movie can only be described as a montage of Tom Cruise dying, and he dies a lot. Let’s see, he gets shot, crushed, blown up, shot some more, ripped apart by aliens, and run over by his own troops, among others. When he trains with Rita, it’s not much better. Every time he gets injured, tired out, or their time is simply up, she just shoots him in the head in order to reset the day. That’s a true friend right there.

Liman is most known as an action director, with multiple “Bourne” movies under his belt, and “Edge of Tomorrow” doesn’t disappoint in the regard, as the high-octane stuff is fantastic. Cage’s first foray into open combat plays like a futuristic update of that first scene from “Saving Private Ryan.” It isn’t quite as long or overwhelming, but the camera captures the chaos and the character’s frayed, frantic mental state. But in addition to this side of things, he and Cruise have a solid handle on the character elements, too. Though it easily could, story never devolves into cliché romance between Cage and Rita, but you still see how much watching Rita die day after day after day—as well as everyone kicking the bucket around him on the beach—weighs on Cage.

Christopher McQuarrie’s (“The Usual Suspects”) script isn’t without flaws, but overall it is clever, fun, and never takes the easy way out. The Mimics are essentially an intergalactic virus that functions as a hive mind, and he links that to the repeating time. At times there’s even a caper feel. For a movie about repetition, “Edge of Tomorrow” is rarely repetitive. There are a couple instances where the wash, rinse, repeat structure does start to wear out its welcome, but surprisingly few, and largely, the way the story unfolds is smooth and satisfying. One particular scene near the end is the most glaring issue, sidetracking the pace for a few minutes, but these are minor problems, and don’t dampen your enthusiasm and the excitement.

It’s too bad that “Edge of Tomorrow” is tracking to be another flop for Cruise, because it’s a great summer movie. This is exactly the raucous, fun adventure that you want out of a big blockbuster release. From start to finish, you’re on board. There’s a good hook, tons of action, the combination of practical and computer special effects look fantastic on screen. “Edge of Tomorrow” is exactly as awesome and fun as you want this movie to be. Do yourself a favor, and get to the theater to watch this movie.

Posted by Brent McKnight at 6:52 PM