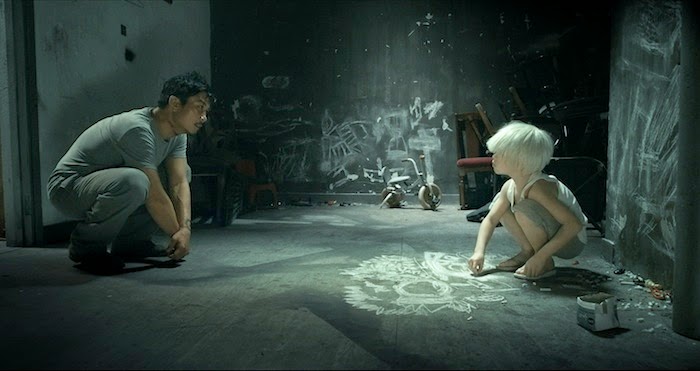 The last movie I saw from the mind of Juno Mak, 2010’s “Revenge: A Love Story,” is not an easy movie to watch, even for the most seasoned shock cinema veterans. Full of brutal sexual violence, torture, mutilation, and some ways to deal with a pregnancy that most people would never think of, it can be a rough go. But it’s also a fantastic feat of storytelling, full of misdirection and moves that totally change your perspective on the film. Mak wrote and stars in “Revenge,” and he steps behind the camera to direct the vampire horror thriller “Rigor Mortis,” offering up a different kind of darkness.

Though “Rigor Mortis” is definitely a movie designed to make you uncomfortable, it largely eschews the straight up violence and depravity—don’t worry, there is still a bunch—for spooky atmosphere, a creepy story of broken people, and by crushing your eardrums. This movie is seriously loud at times. Before the recent screening at the Seattle International Film Festival, the guy who introduced the film warned about this, but still, no one was prepared for the aural assault to follow. Mak cranks discordant sounds up until you’re damn well physically uneasy, making sure that you’re unsettled before you even come close to seeing a vampire.

When has-been actor Chin (Chin Siu Ho) moves into a rundown apartment complex in order to kill himself in peace, he gets way more than he bargained for. This isn’t your average everyday tenement, in addition to being eerie in its own right, there are supernatural forces in play in the building. A ghost-like, white-haired child and his troubled, spectral mother haunt the hallways, a retired vampire hunter runs a restaurant on the ground floor, and Chin’s unit has remained vacant due to a hideous crime that took place there and that still hangs heavy in the air. After a neighbor intervenes and cuts Chin down as he hangs from a ceiling fan, is when the real problems begin in earnest.

Though the film calls these spirits vampires, and they fit in with the Hong Kong tradition of that genre, they’re not exactly the undead bloodsuckers you expect. In fact, in the Western tradition, they more closely resemble ghosts than vampires. Using amulets and spells and longhaired demon girls, Mak and screenwriters Leung Lai-yin and Philip Yung, offer a quick education for those unfamiliar with this specific mythology. Black and white magic comes into play, vying for control, and Mak creates an atmosphere thick with tension, and a bleak mood that evokes twisted nightmares and mid-1990s Japanese horror, especially “Ringu” and its ilk. This makes sense when you realize that legendary director Shimizu Takashi (“Ju-On”) serves as one of the producers on “Rigor Mortis,” and definitely brings that feel along for the ride. In fact, Mak also credits him with the unnerving sonic structure of the film.

Appearing in movies like “Dream Home” and “Revenge,” Mak is definitely part of the younger generation, but with “Rigor Mortis,” he definitely tips his cap to his predecessors and what came before. In addition to paying homage to earlier films, the cast is full of legendary Hong Kong actors like Chan Yau, Kara Hui, Nina Paw Hee Chung, Chung Fat, Richard Ng, and many more that fans of Hong Kong cinema will recognize and remember fondly. Some of these actors even came out of retirement for this film.

At times, “Rigor Mortis” relies too heavily on CGI to create the creature effects, and what they do will definitely be familiar to horror fans. But that is a relatively minor quibble, and overall, “Rigor Mortis” provides an eerie, haunting movie that isn’t what you expect going in. Mak takes time to set the stage and gradually ratchet up the tension and conflict. Combine the atmosphere with the strong performances across the board and a unique story, and Mak continues to be one of the brightest cinematic voices emerging from Hong Kong.