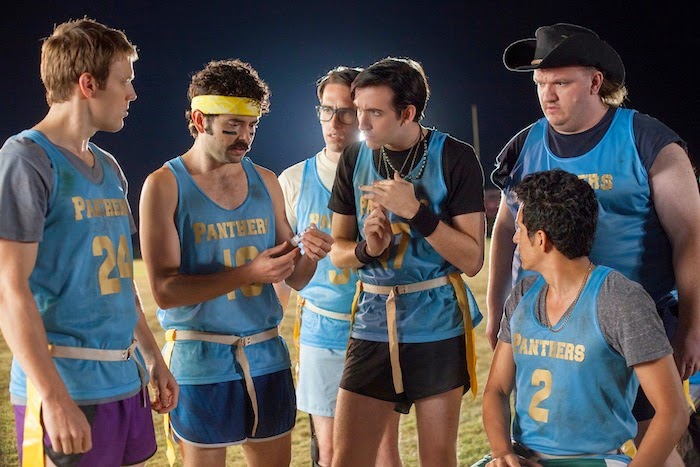 Every subculture, niche market, and fringe topic, no matter how minor and specific, will eventually get its own movie. This is something I firmly believe. Bike messengers have “Premium Rush,” food trucks recently got “Chef,” and then there is dodgeball, ping-pong, paintball, and damn near everything else you can imagine. Personally, I’m waiting for a movie about an over 30, co-ed kickball team, and considering that Andrew Disney’s “Intramural” takes on the no-stakes world of college, recreational flag football, we’re not too far off.

Despite a ridiculous premise, as well as some shortcomings typically associated with low-budget movies, “Intramural” is a goddamn blast. To compare it to the Ben Stiller/Vince Vaughn joint “Dodgeball” is not any kind of stretch, because they’re basically the exact same movie. No joke, there’s even a crotchety coach in a wheelchair. It’s all supposed to poke fun at all the clichés of sports movies, but more than anything, it winds up taking aim at the movies that take aim at these platitudes. There’s nothing particularly original going on, but though you’ll have a definite sense of familiarity, you’ll still have a damn good time.

After a tragic flag football accident—yes, a tragic flag football accident—leaves a friend and teammate paralyzed from the dick down, Caleb (Jake Lacey, “Obvious Child”) walks away from the pseudo-sport he loves, or at least sort of enjoys. But now, on the verge of graduation, facing down a stint in law school and a heinous beast of a girlfriend (Kate McKinnon, “Saturday Night Live”) who has his entire life planned out whether he likes it or not, he gets the team back together. As he tells his reluctant teammates, this is their “last shot to do something that doesn’t matter.” And that’s exactly what they do, nothing of any consequence, but they certainly have fun in the process. 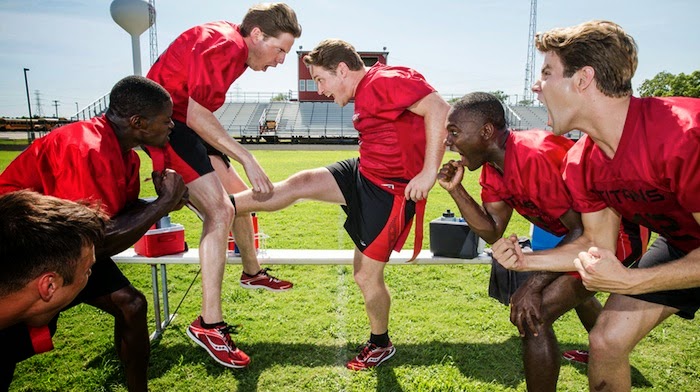 Along the way, there is, of course, a rival, the aptly named Dick (Beck Bennett, “SNL”); a romantic interest, Meredith (Nikki Reed, “Twilight”); and some valuable lessons learned about being true to yourself, teamwork, and avoiding the homeless army that lives in an abandoned roller rink. As standard as the plot is, “Intramural” brings enough absurd nonsense to the table that it’s worth checking out if you’re in the mood for an over the top comedy. We’re talking, after all, about a movie where the metaphor “you’ve got to crap on the ceiling” is in play, or is it a metaphor?

The film comes close to wearing out its welcome a couple of times, but never does. You don’t get the earnest connection between characters that you get in other silly sports movies. While the script pays lip service to that, it never really tries to make that happen, and is much more concerned with being juvenile and inane. Still, Lacey is an engaging lead, with a  sardonic perspective on these shenanigans—he, of all people, knows that all of this ridiculous shit is completely insane—that you can’t help but root for him. You can bet that we’ll be seeing more from him in the near future.

“Intramural” is a lot of fun, but overall is little more than that. Good for some laughs, this isn’t necessarily a movie that you and your buddies will quote endlessly, or that you’ll feel the need to watch and rewatch for years. But it is exactly what it sets out to be, a good time. I saw this as a screening for pass holders at the Seattle International Film Festival a while back. Before the screening, all these people who spent a month watching highly artistic fare from around the world talked about how terrible this was going to be, and how they were just going to leave 15 minutes in. But you know what, none of them did, and they laughed their asses off.

Posted by Brent McKnight at 5:52 PM