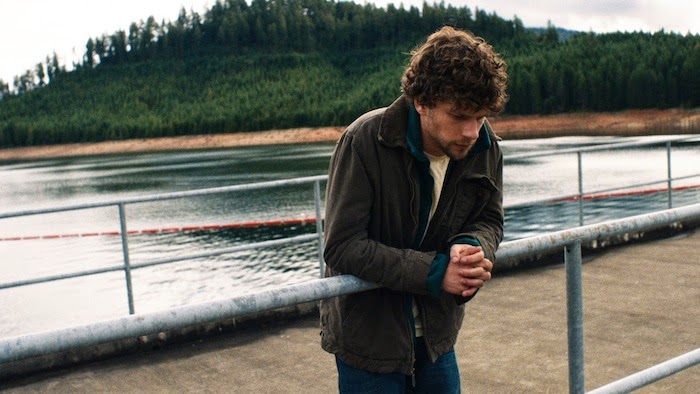 Kelly Reichardt’s (“Meek’s Cutoff”) “Night Moves” is one of two movies I’ve seen at the Seattle International Film Festival this year about dam removal. The other, “DamNation” is a documentary that charts the environmental impact, corruption in government programs, and the long, twisted history of damn building in the United States. That film plays as a nice companion piece to “Night Moves,” a fictionalized thriller about a trio of environmental activists who take it upon themselves to remove a particular dam that has a stranglehold on an Oregon river.

If you’ve ever spent much time around any collection of activists or radical types—environmental or otherwise—you’ll recognize just about every one of the folks portrayed in “Night Moves.” The action centers on Josh (Jesse Eisenberg). A loner who keeps to himself, he’s sick of the empty rhetoric and lack of meaningful activity in the movement, and decides to do something more direct. He enlists the help of Dena (Dakota Fanning), a rich girl playing revolutionary who has no idea what she’s actually getting into; an idealist with no sense of the true gravity of the situation. Harmon (Peter Sarsgaard), an ex-military man who can’t stomach the endless debate and complacency, rounds out their team. Together the three hatch a plan to blow up a particularly out of date, pointless dam, and must deal with the consequences, those they expected, as well as the unforeseen variety.

For a movie like this, you may expect a preachy, message-heavy 112-minutes, but that’s not what you get. “Night Moves” isn’t about the politics either way, and is that much stronger for leaving that element out; you never feel beaten about the head and neck by an obvious moral. Either way, you run the risk alienating large portions of your audience. While the characters do talk about their motivations, they do so as part of their characterization, and it’s not a focal point. The act itself, the ensuing repercussions, and the impact on the key players, are the primary concerns. Tension comes as Josh, Dena, and Harmon piece together their plan, building a bomb, strategizing the location, and covering up their tracks as they go along.

This lack of an agenda isn’t the arena where “Night Moves” avoids falling into easy cliché. For instance, at one point the situation could easily have devolved into kind of jealous love triangle, but Reichardt and co-writer Jonathan Raymond sidestep this, toying with your expectations. They juxtapose the desire for more immediate, visible change of Josh and his crew with the longer view of Sean (Kai Lennox). He and his circle of family and friends run the cooperative organic farm where Josh works, in the hope of enacting a smaller, more gradual, sustainable change. Again, “Night Moves” doesn’t necessarily push you towards one side or another, it gives you options and lets you decide for yourself.

If you’re looking for a nice, tidy finale, with everything wrapped up in a neat little bow, “Night Moves” isn’t going to give you that. Much like the rest of the film, the end leaves you to your own devices in order to draw your own conclusions. As the group navigates through a variety of close calls, whispered rumors and innuendo, and paranoia, the tension and atmosphere starts to close in around them. You understand the point, and while parts of the end work, others are forced.

“Night Moves” is a decent thriller with a unique, interesting hook, but in the end it’s too procedural and removed in nature. Not throwing in with one side or another avoids one set of problems, but creates another. On their own, you don’t connect with the characters in any legitimate way—their backstories are largely left in shadows—and you’re never fully emotionally invested in the action. Too cold and calculated, it is difficult to root for or against anyone, and there’s simply not enough substance to make “Night Moves” stand out in a crowd.