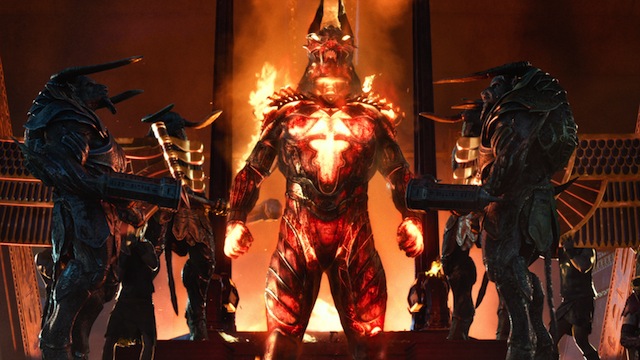 Alex Proyas’ new film, Gods of Egypt, is straight up bonkers. That’s the impression given by the trailers and TV spots and the overall, weird-as-shit aesthetic, but nothing, not the promotional material, not even a handful of strong LSD, will prepare you for the insanity that unfurls before your eyes.

Gods of the Egypt is campy, silly, nonsensical lunacy. If you’re looking for reason, logic, and rationality, it’s best to explore other options. However, if you’re in the market for some chaotic, Zardoz-style madness and mayhem, where anything can happen, and then does, this may very well be the movie you’re looking for. The fact that the script was written by Matt Sazama and Burt Sharpless, the duo behind last year’s bananas Vin Diesel vehicle, The Last Witch Hunter, makes almost too much damn sense.

Featuring Egyptian deities, Gods of Egypt is sort of based on, and I mean as loosely as you possibly can base one thing on another, ancient mythology, but from that foundation, things spiral quickly out of control—think Clash of the Titans jacked up on meth. Despite all the surrounding chaos, which includes flying, transforming, eight-foot-tall, gold-blooded gods who live among the people of ancient Egypt—which is the entire world, a world that is, quite literally, flat—and, I shit you not, a spaceship and a demon worm that attempts to devour all existence on a nightly basis, the story is relatively simple. 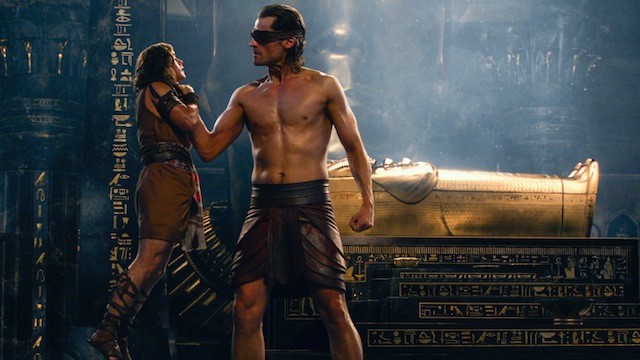 The god of darkness, Set (Gerard Butler), usurps the rule of Egypt from the rightful ruler, his nephew Horus (Nikolaj Coster-Waldau), stealing his eyes in the process. In order to save his love, Zaya (Courtney Eaton), from the afterlife, a mortal hero, Bek (Brenton Thwaites), must team up with a self-pitying Horus to rescue his true love and free the world from doom and gloom and slavery.

Big and brash, not to mention with a reported budget of $140 million, Gods of Egypt is a movie that might be expected to be a special effects-driven spectacle. And it is certainly something to gawk at, but the ubiquitous digital component looks like hot garbage. The action sequences resemble video game cut scenes, as if they’re simply not quite finished as the camera swoops and sweeps over computer rendered scenes of ancient Egypt, shows off characters against green screen nightmare backdrops, and as assassins ride fire-breathing Dune sandworm knockoffs.

Gods of Egypt falls into a similar category of fantasy epics, mostly from the 1980s, where exaggerated budgets and dreams resulted in less-than-stellar finished products. I’m talking Masters of the Universe, Krull, Dragonslayer, and films of that ilk. (Side note, I adore all of those movies.) And as with most of these, the acting doesn’t do the film any favors. 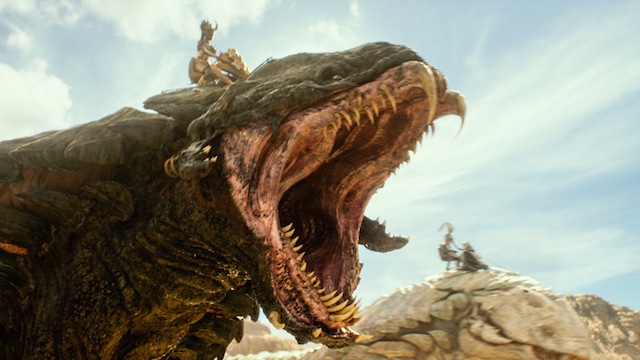 Even wearing a ton of bronzer, the Australian BrentonThwaites sticks out like a pasty sore thumb in ancient Egypt—the film has fielded a number of claims of whitewashing that aren’t unfounded—and is wooden in a way hunky teen heartthrobs too often are. Gerard Butler’s characterization of Set primarily consists of shouting and a cocky swagger that almost, a handful of times, makes it seem like he’s in on the joke. Nikolaj Coster-Waldau’s good-time-party-god is like a deity version of a frat boy out for redemption. Perhaps the most puzzling character is Geoffrey Rush—Oscar-winner Geoffrey Rush—and his Ra, the sun god, creator of all, who is the one on that spaceship fighting that demon worm mentioned earlier. Chadwick Boseman, soon to be known as Marvel’s Black Panther, also shows up as Thoth, the god of knowledge, and has a total blast, affecting a nerdish, vain intellectual demeanor.

As chaotic and manic as Gods of Egypt can be, it starts off slow, full of information dumping voiceover and overly expository dialogue. Clocking in at 127-minutes, it’s full of starts and stops, and sags in especially egregious fashion in the middle as Bek and Horus go through step after step in an overly elaborate plan, moving onto yet another leg on their journey through Egypt, the heavens, and the underworld of the dead, remaining static just as they should climb towards some sort of resolution.

Granted, as much as the pace flags, the sheer frantic energy and WTF nature of the climactic battle more than redeems the soggy meandering.

Gods of Egypt is the latest in a long line of bat-shit crazy, half-assed fantasy epics that leave audiences scratching their heads, jaws agape, wondering what the hell they just witnessed. It’s half horrifically atrocious and tedious, half the best time I’ve had at the movies since Star Wars: The Force Awakens. There’s the distinct impression that Summit Entertainment threw ton money at Alex Proyas, stood back, let him do whatever the hell he wanted, and just held on for the wild ride to follow. Brutally overlong, the frenzied, laugh-out-loud absurdity will appeal to some, but only those special few with a deep love and appreciation for manic absurdity, camp, and over-the-top cheesy goodness. Fortunately for me, I’m one of those people. [Grade: B]

Posted by Brent McKnight at 3:04 PM

This critical review only shows me to never trust reviews because the movie was incredibly great with beautiful positive messages that touched my heart, I am so sick of movies that contain zero moral justice or spiritual consciousness I loved The Gods of Egypt! And the reviewer can go suck eggs.

Dude, Gods of Egypt is rad. And it say so in the review.

I'm curious, can the grades from F to A+ be translated to the scale of one to five stars?

Also, as a film critic myself, I gave it an A+

If you like, you can roughly translate the grades--the five letters (A, B, C, D, F) to the five stars. To be honest, I don't put a lot of time into the grade. I dislike ranking/grading films, but it's a necessary evil.

My grades are, in general, an immediate gut reaction to the film. Sometimes they evolve a bit as I'm writing.

Also glad I'm not the only one who loves this weird-ass movie.