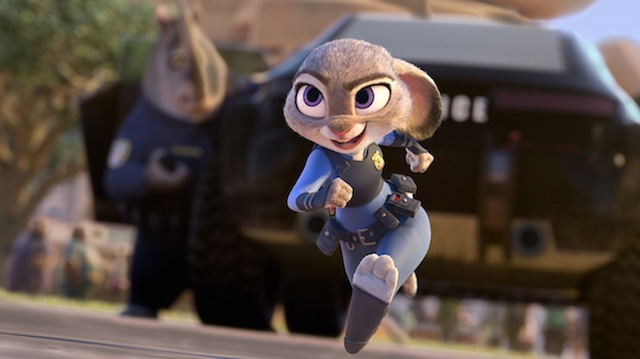 Disney Animation’s Zootopia is a gorgeous, brightly colored visual spectacle; a sweet, moving tale of friendship and acceptance; a shadowy, noir-style crime story; and some of the greatest on-screen world building in recent memory. Oh yeah, it’s also a sharp, pointed, timely indictment of systemic racism and deeply ingrained, largely unspoken intolerance in our society. All told through adorable, relatable, anthropomorphic animals wearing clothes and acting, at times, uncomfortably human. There is so much more going on here than just another “cute” animated feature—cute is also something of a racial slur in the world of Zootopia.

The story centers on Judy Hopps (Ginnifer Goodwin), a small town bunny with big dreams and never-say-die optimism. She defies the odds, attaining a lifelong dream of becoming the first rabbit police officer in the metropolis of Zootopia, where mammals of all sizes, both predator and prey, live together in harmony. At least that’s what she thinks. What she finds is all the old prejudices are still there, just hidden under layers of smiles and condescension—the big, strong animal officers don’t want her around, no one takes her seriously, and her chief, a stern buffalo (Idris Elba), resents her presence and assigns her to hand out parking tickets.

Ever the overachiever, Judy finally convinces her superior to let her help with a real case, finding one of numerous missing predators who have gone missing, and in her investigation she enlists the help of slick con-man fox, Nick Wilde (Jason Bateman). Together they explore the underbelly of Zootopia, introducing the audience to the ecosystem-based neighborhoods—Tundra Town, Sahara Square, and the like—and uncover a dark, sprawling conspiracy that goes all the way to the top of the Zootopian power structure. 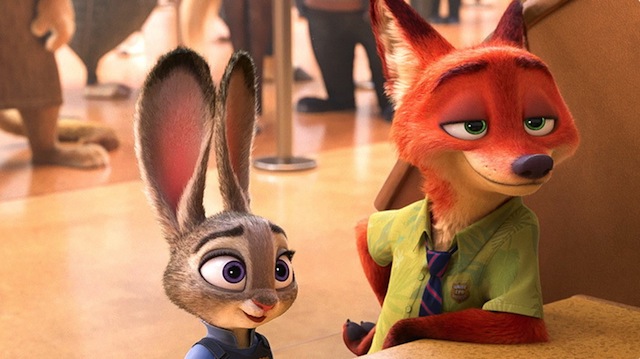 Within the trappings of the unlikely buddy pairing and the toon noir set up, Zootopia dissects entrenched bigotry and narrow-mindedness in a clever, legitimately insightful manner. Judy not only experiences prejudice and witnesses the ugliness from others, she is forced to confront her own biases and feelings that she doesn’t even know she has. Over the course of the movie, she’s compelled to look at herself and examine how she, too, is implicit in perpetuating a larger system of intolerance.

This is important and topical, and handled in an astonishingly straightforward, perceptive way. Sure, you can watch Zootopia and bask in the elaborate cityscapes and inventive world building, which is phenomenal on its own, but at the same time, what truly sets this world apart, is how deeply it dives into the social commentary. And this is so obviously the primary concern that, at times, the film feels almost reluctant to return to main crime narrative, as it if would rather spend its time discussing these vital, complex social topics than figuring out whodunit.

The world itself is brilliantly established. Zootopia does begin with a huge amount of information, but the historical impetus of this society is cleverly framed as a child’s play, staged by a young Judy, of course. Not only does this give viewers the necessary background details, it also introduces the protagonist and her drive and personality. It could easily have been too much, but never bogs down in the facts and figures, using Judy as a vessel to reveal all of this knowledge. 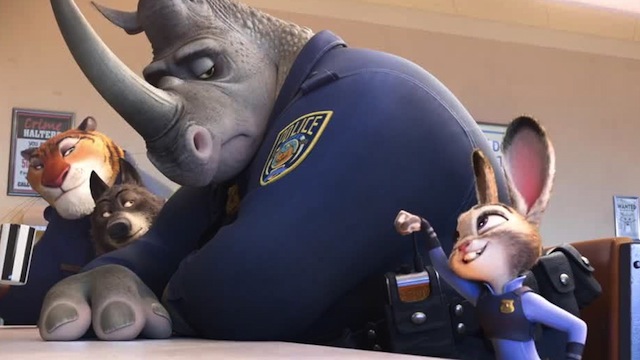 Zootopia is a fully immersive experience. When Judy rides the train into the city for the first time, a small town girl heading into the monolithic urban environment, it’s easy to feel her sense of excitement and trepidation; the skyscrapers and people are overwhelming. And as fantastic and wonderful as the physical environment is, not to mention the character design—the sloths, literal sloths, who work at the DMV are wonderful—it’s the characters and their response to the setting that really sells the world.

These are some of the most authentic, organic, delicately drawn film characters in years. Judy is bold and confident, but also fragile and alone and scared. Nick’s smooth, slick, fast-talking exterior covers his own lingering scars, and he feels the sting of prejudice deeply, even as he laughs it off with a smart-ass quip.

The only possible knock against Zootopia is that it might be a bit overlong, though this will only really be an issue for younger viewers who are more concerned with the bubbly action than the more in depth themes and concerns—I can see some kids getting restless as it builds towards the climax. Like I said, sometimes it has more on its mind than its noir-inspired crime story, which is both its biggest strength and only weakness. This, however, is a very minor quibble, and the pace never flags for anything but a moment.

Zootopia is a spectacular achievement on every level. There are so many layers and so many ways to watch this. It’s a big, bold adventure in a remarkably rendered universe steeped in popular culture, a touching story of unlikely friendship, and a sharp critique of modern society. Most impressive, for all of its analysis and examination, there is no judgment in Zootopia. No one is entirely to blame, no one is entirely without blame; everyone has work to do, and it encourages viewers to look inside, to examine ourselves, and see where we can be better. [Grade A+]

Posted by Brent McKnight at 9:55 PM