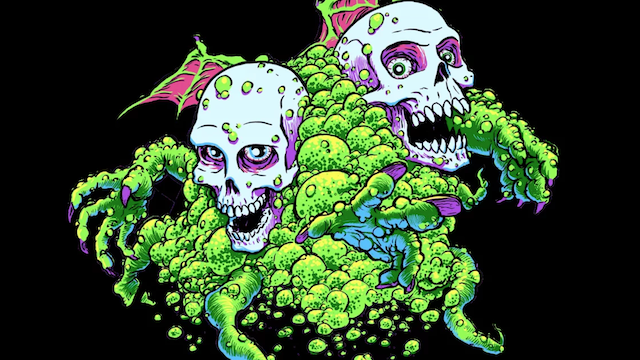 When it comes to film in Seattle, the Seattle InternationalFilm Festival gets most of the press and love—and with good reason, it’s a near-month-long marathon of incredible movies from all around the globe. But SIFF isn’t the only game in town, and if you’re tastes run to the twisted, horrific, and occasionally downright strange, BoneBat’s annual “Comedy ofHorrors” film festival may be just what your warped mind requires, and this year’s fest just dropped a new trailer and announced the full line up.

What the title “Comedy of Horrors” suggests, the day-long fest more than delivers: ample gore with plenty of laughs. The sixth installment goes down on April 23, moving from Central Cinema to new digs at SIFF Cinema Uptown (don’t worry, they still have beer). Hosted by Steve and Gord from the BoneBat Show podcast, this is an epic wave of bizarro features and shorts, with gift bags and some music thrown in for good measure. I’ve gone the last few years, and it’s a damn fine time to be sure.

Check out the trailer for “Comedy of Horrors 6” below, and then we’ll get to the list of features and shorts. Click HERE for more info.

As far as features go, “Comedy of Horrors 6” will feature a pair of Seattle premieres. First up is Patchwork. Check out the synopsis:

Jennifer, Ellie, and Madeleine go out for a night on the town, and awake to find themselves trapped in the same body after being murdered, dissected and stitched together. Determined to find out what happened to them and who is responsible, they set out on a madcap quest for revenge.

Ava Dobkins is recovering from demonic possession. With no memory of the past month, she is forced to attend a Spirit Possession Anonymous support group. As Ava struggles to reconnect with her friends, get her job back, and figure out where the huge bloodstain in her apartment came from, she's plagued by nightmarish visions—the demon is trying to come back.

In addition to the two features, there are also numerous blocks of short films, with each collection usually clocking in at around feature length. These usually run the gamut from dark and twisted and legitimately disturbing, to gory and gooey and downright hilarious. Take a look at the list of this year’s entries from all around the globe.

In addition to the movies, there will be prizes, beer (I feel like I mentioned that, but it’s worth mentioning again), and music from Lester T. Raww’s Graveside Quartet and the Pine Box Boys, both out of San Francisco. I can’t think of a better way to spend a lovely Saturday afternoon in spring than being inside, in the dark, drinking beer, watching horror movies.
Posted by Brent McKnight at 4:44 PM