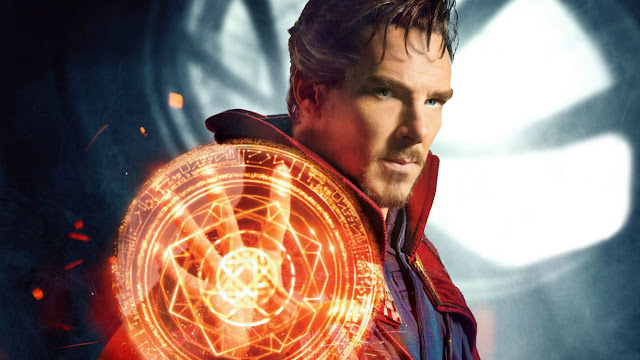 Marvel movies take a great deal of (often very warranted) heat for being overly similar. It’s one thing to create an overarching aesthetic in a shared cinematic universe and lay out markers that identify a film as a piece of a larger work. It’s another when every film cranked out starts to feel like the same damn thing. The comic book giant’s latest endeavor, the mystical adventure Doctor Strange, is unique in that it both manages to buck this trend while falling face-first into most of the pitfalls.

At its peak, director Scott Derrickson—working once again with writing partner C. Robert Cargill (Sinister), and teaming up with Jon Spaihts (Prometheus, Passengers)—turns in the most visually stunning movie in the Marvel canon. Introducing magic and mysticism to the MCU, Derrickson fills Doctor Strange with lunatic acid trip visuals, soaring Day-Glo alternate dimensions that are more comic book-y than almost anything else ever put on screen, kaleidoscopic fractal patterns, and cityscapes folding in on themselves like Inception ate a handful of psychedelic mushrooms and watched Fantasia. Though it touches on overwhelming and is frequently quite literally dizzying, Doctor Strange is spectacle of the highest order and something remarkable to behold.

Stop me if you’ve heard this before. Cocky rich white dude gets his comeuppance, finds a new path, and learns to serve a greater good and larger purpose. The character arc of the protagonist is almost beat for beat the same as Tony Stark from Iron Man. It doesn’t help matters on the familiarity front that protagonist Stephen Strange (Benedict Cumberbatch) shares the same hairstyle and facial hair combo as Robert Downey Jr.’s billionaire playboy philanthropist. Strange does have a dope-ass cape that functions as a protective sidekick, however. 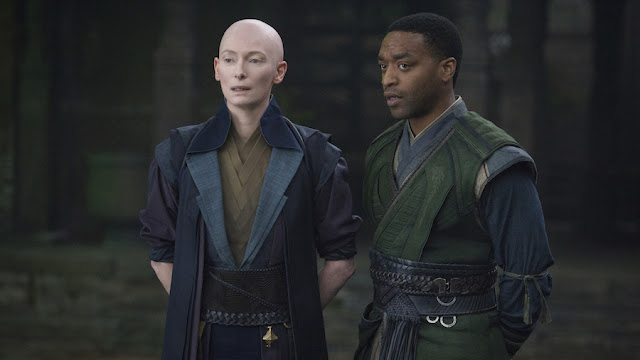 A brilliant neurosurgeon—the best neurosurgeon—Stephen Strange swaggers through his O.R. like a rock star, callous and arrogant, more concerned with his reputation than helping anyone. When a horrific car accident leaves his hands shattered and his career in ruins, he obsessively searches for answers. His quest takes him to Nepal, where he encounters Mordo (Chiwetel Ejiofor), who introduces him to the Ancient One (Tilda Swinton), who teaches him about magic and sorcery and other dimensions. The set up also bears a striking similarity to Batman Begins (I feel like Scott Derrickson owes Christopher Nolan a thank you card). Things are not, of course, all hunky dory, as one of the Ancient One’s former protégés, the evil sorcerer Kaecilius (Mads Mikkelsen), has a plan that will ruin everything for everyone—and by that I mean likely destroy the world.

Just because it travels a well-worn narrative path doesn’t negate the entertainment value in Doctor Strange. It does what Marvel movies do best, which is deliver sweeping high adventure that’s occasionally truly jaw-dropping. From a purely popcorn fun perspective, it’s on par with the likes of Iron Man. Though being overly formulaic holds it back from being great, it’s fun and chaotic and delightfully weird. And the introduction of magic and multiple realms opens up new and potentially exciting avenues for the MCU to explore as it dives deeper into Phase 3.

Doctor Strange does suffer from that common Marvel malady: a lackluster villain. Thus far, the biggest Achilles heel of the MCU has been a dearth of memorable antagonists—only Tom Hiddleston’s Loki has been more than a one-off big bad. (And Thanos, who has yet to become anything beyond a vague looming question mark.) And Kaecillius falls into the category of shrug-worthy adversaries. He’s fine. His plan will result in the end of the world. The stakes are high. That’s what’s expected. Mads Mikkelsen gives the character some texture, and he has such a weird vibe that some of his menace transfers over. A stand-in for the dangers of unchecked fundamentalism and zealotry, in the end, his beef with the Ancient One proves little more than serviceable. 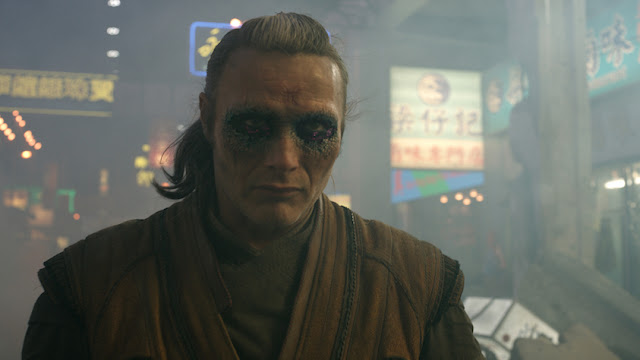 Benedict Cumberbatch is as good as expected as the Sorcerer Supreme. His haughtiness and egotism prove fragile, replaced by a frantic mania as he loses the one thing that defines him. Again, his most obvious comparison point is Tony Stark, but while Strange is engaging—he’s far funnier than I anticipated, with a dry, biting wit—he’s not as compelling or well-wrought as his armor-clad counterpart.

The rest of the performances are solid, though not necessarily spectacular. Chiwetel Ejiofor plays Mordo as steadfast and inflexible, but still personable, undergoing his own crisis of faith. Rachel McAdams makes the best out of her role as Dr. Christine Palmer, a fellow surgeon and reluctant love interest for the hero. It’s largely thankless and functions primarily to tether Strange to his old life. And as usual when he appears in these big Hollywood pictures, Scott Adkins is woefully underused, relegated to a role as a mute background thug who shows up during over-edited fight sequences. Though watching him tussle with the Cloak of Levitation is no small amusement.

Ethereal, otherworldly, and clearly having a damn fine time, Tilda Swinton steals the show as the Ancient One. Such a singular, off-kilter performer, she brings the character to life in a way that’s badass and playful and spiritual all at the same time. She’s also representative of the biggest controversy surrounding Doctor Strange, whitewashing the story’s Asianness. 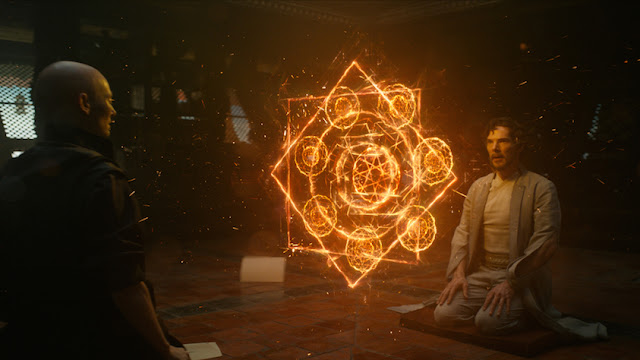 (I’m totally going to fuck this up, but I’ll give it a shot. There’s a fantastic interview in The Daily Beast where Scott Derrickson totally owns up to what they did, which is far more comprehensive and incisive than anything I have to contribute to this conversation. That said, onward.)

The Ancient One is a Tibetan mystic, portrayed on screen by the whitest white lady. In the adaptation process, they swapped the gender from male to female (score one for gender equality in a notoriously dude-centric movie universe, though maybe dock point for racial diversity).

Cargill compared the predicament to Star Trek’s Kobayashi Maru, an unwinnable training exercise, and he’s not entirely wrong. On paper, the character began life as a racial caricature, and the initial idea behind making the Ancient One a woman was to hopefully avoid tumbling into that stereotype. As far as the race-trading, Derrickson worried that if they cast an Asian actress in the role, it might veer too close to another prevalent offensive stereotype, the “Asian Dragon Lady.” (Apparently the lesson here is that Hollywood believes it's impossible to have a strong Asian character, male or female, without it becoming a stereotype. Yeah, I think that's a bullshit excuse, too.) 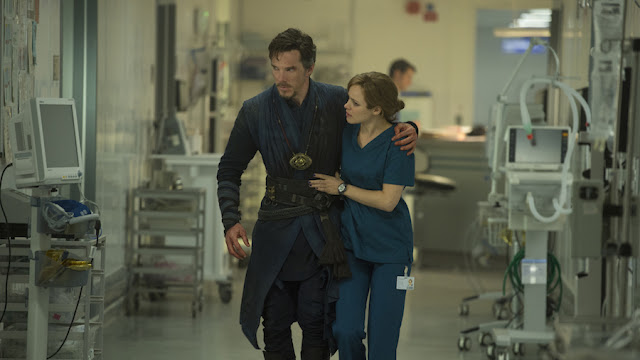 In an attempt to circumvent a potential minefield, they essentially erase the character’s cultural identity, which threw them into a whole other treacherous area. Basically, they found themselves in a damned-if-they-do-damned-if-they-don’t scenario. It’s well-intentioned (though horribly misguided), and they obviously gave it quite a bit of thought; they even try to revise her backstory to make it fit—she’s Celtic apparently, as per one throwaway line. But while their choices are understandable, and the performance is fabulous, she still stands out as white Western character dropped smack in the middle of Asia, draped in Eastern trappings.

The White Savior trope is also in full effect in Doctor Strange, where other cultures exist primarily to provide salvation for outsiders. Strange shows up on the scene, learns their ways, learns them better, and saves the day where no one else could. It’s similar to how Rachel McAdams character exists to serve the hero and patch him up when he needs fixing.

And while I’d have to watch it again to be sure, for a movie that focuses a great deal on martial arts, I don’t know that Doctor Strange shows a single Asian person fight. We see the aftermath of Wong (Benedict Wong)—himself a bit of a bookish, library nerd stereotype—fighting, but none of the action takes place on screen. Tina Minoru (Linda Louise Duan) has a small role, though I honestly don’t remember seeing her much—she could, however, serves as a bridge to a Runaways adaptation, as she’s one of their mothers, which is awesome. 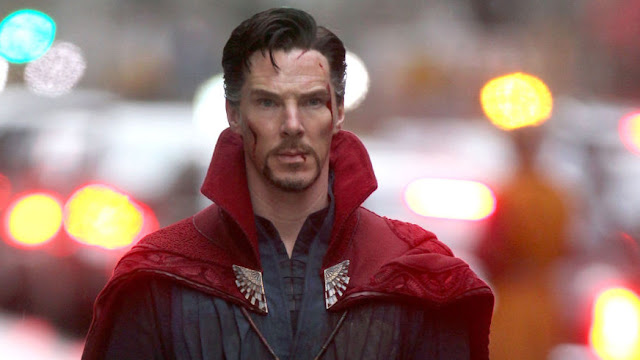 Purely from a spectator’s standpoint, none of this interrupts the flow, pace, or action. You might not even notice it at all. But it’s there if you look for it, and it gives the film an odd shade.

As questionable and curious as some of the choices end up—it manages to be one of the most diverse Marvel movies, as well as one of the most problematic—and despite a rote, familiar origin story, Doctor Strange delivers a dazzling mystical blast. Visual pyrotechnics and insane chaos elevate the film above the routine nature of its story, and establishing the magical realm opens up new spaces for the MCU to explore. [Grade: B]

Posted by Brent McKnight at 1:51 PM