Sarah Beth Edwards’ Fall Back Down is the cinematic personification of living in a big punk house with a ton of roommates. It’s fun and chaotic, random and strange, frustrating and complicated, full of wild characters, and leads you into all sorts of off-kilter adventures. You’re going to drink too much, you’re going to write some songs, you’re going to wake to find an impromptu show in your basement, you’re going to make out with some people you shouldn’t. And it’s never going to wind up where you expect.

A lo-fi punk rock mystery romance, Fall Back Down follows Nick (Andrew Dunbar). When his radical girlfriend, Lizzie (Jacky Lai), bails for humanitarian work in Nigeria, he spirals, as so often happens. He abandons his activism, works and gets fired from a long string of jobs, and wanders aimlessly through life. All of which lands him a job in a sketchy sweatshop. Along with his uptight, combative new coworker, Reena (Aadila Dosani), he discovers something shady and sinister going on—beyond the usual human rights violations and general sweatshop fuckery. The mismatched duo must get to the bottom of things and maybe, along the way, get to the bottom of each other. 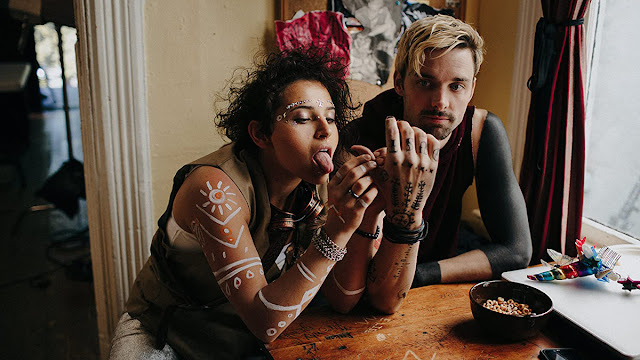 Where Fall Back Down is best is in the texture of the world. This rings true and authentic in ways that movies about punk and this style of grassroots activism rarely do. It feels lived in and genuine, down to Nick’s shitty homemade Black Flag bars tattoo. If you’ve ever lived in a place like this, you know the pain of not being able to use the bathroom because the toilet’s broken again and you can’t call the landlord because there are seven extra people living in crawl spaces, or what it’s like when two roommates who’ve been up all night tripping balls interrupt your breakfast. It’s all very nostalgia inducing.

Full of odd flourishes, like a coworker who makes X-rated balloon animal creatures, the dynamic between Nick and Reena drives the story forward. He’s unmoored and drifting, and as woke as he may be, still doesn’t see his privilege. The sweatshop, and its entirely immigrant work force, fronted by Reena, a South Asian woman, stands in stark contrast to his glib approach to and outlook on life—the stakes are much higher for them should they lose their job; he has a safety net, they don’t. Nick’s disillusioned nihilism conflicts with Reena’s practicality. 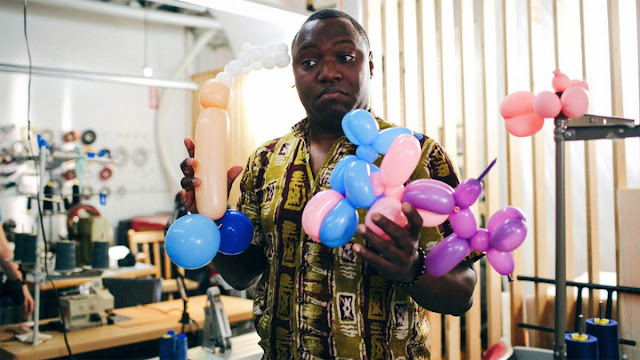 Dunbar embodies the fuck-it mentality and general disaffected white boy malaise. For her part, Dosani similarly captures Reena’s prickly exterior, honed and sharpened by necessity. As circumstances continue to throw them together, they each evolve in ways that belie the anarchic, often meandering film surrounding them.

And does Fall Back Down meander. It mirrors its characters, especially Nick, in that the plot and pace drift and roam far afield. Nowhere is this more evident than the storyline with Nick’s banjo-playing sister, Althea (Dinah Lafleche), trying to overcome a crippling case of stage fright. Althea’s a fantastic character, who, even with her own aimlessness, grounds Nick. The two have a great dynamic, and she, in turn, has a healthy, supportive relationship with her own partner—juxtaposed with Nick’s romantic train wreck. And while I actually like her arc, it pulls focus away from the primary narrative thrust and dampens the pace, most noticeably as it builds toward the climax. It simply adds more girth to a movie that’s already a touch overlong 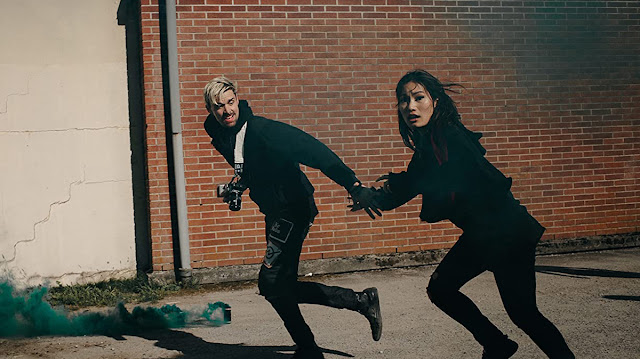 Fall Back Down feels like a warm hug, like a big inclusive family full of punks, misfits, weirdos, and outsiders screaming and raging at a society that has no room for them, clawing and scraping to create their own place to belong. It’s fresh and exciting, lively and energetic, a bit unfocused to be sure, but also a damn fine time. (Seriously, there’s a bad guy with a blow dart gun, what’s not to love?) [Grade: A-]