Growing up a punk rock kid in a small or at least smallish town, Penelope Spheeris’ 1981 documentary The Decline of Western Civilization, chronicling the early Los Angeles scene, served as a de facto history text book. You poured over the footage of The Germs, Black Flag, Circle Jerks, and more, noting how they lived, how they dressed, the fuck you attitude they flaunted by their very existence. This was your primer, your roadmap to being an outsider.

There were two follow ups, 1988’s The Decline of Western Civilization Part II: The Metal Years and 1998’s The Decline of Western Civilization Part III, though it was the first that was the most successful and had the widest impact. All three are now available in on Blu-ray in a fantastic new package from Shout! Factory, and whether you have a nostalgic connection to the subjects, or just want to glimpse into a couple of under-examined subcultures, this is a set well worth adding to your collection.

Hitting the streets in 1981, the original Decline of Western Civilization dove head first into the whirling mosh pit of the Los Angeles hardcore punk scene. Featuring chaotic live performances by legendary west coast groups, cut throughout with intimate interviews, it’s a snapshot of a specific moment, a specific social and cultural group, and a specific time, warts and all, and comes across as much more authentic than many documentaries with similar aims.

This feels legitimately dangerous a way that not many movies do, and it captures the sense of outrage and dissatisfaction that drew so many people to punk rock in the first place, looking for somewhere to belong, to be heard. In fact, the Los Angeles Police Chief Daryl Gates banned the film from screening in LA after its midnight premiere in ’81. 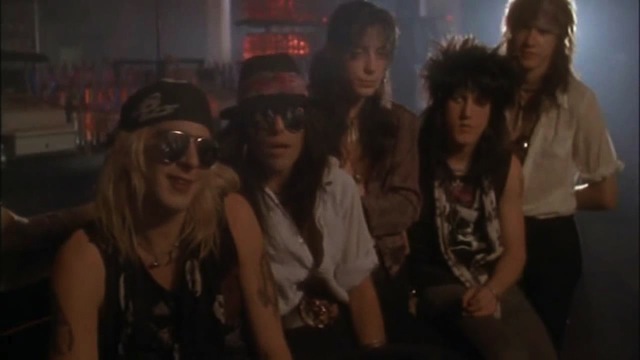 While the LA punk scene comes across gritty and raw, The Decline of Western Civilization Part II: The Metal Years, depicts a scene that is bloated, almost a caricature, and, in 1988, was only a few short years from imploding and collapsing in on itself. Featuring interviews with established bands, like Poison, as well as acts like Odin, Lizzy Borden, Faster Pussycat, and others struggling to break through and find mainstream success, Decline 2 is a portrait of excess.

Aside from a love of music and a desire to make a lot of money and bang as many groupies as possible, there’s not much substance. The subjects just want to rock out and get wild, and an overall frat party vibe fuels the movie. While it does try to touch on topics like sexism in the scene—treatment of women is across the board horrendous—the effects of rampant drug and alcohol abuse, and the prospect of not being successful, those are relatively minor asides that barely touch on their struggles. Featuring a notorious moment with W.A.S.P. guitarist Chris Holmes drunk off his ass in his mother’s swimming pool lamenting his life, the scene comes off as more silly and swollen and sad than anything else. Strip away the glam, there’s little else. 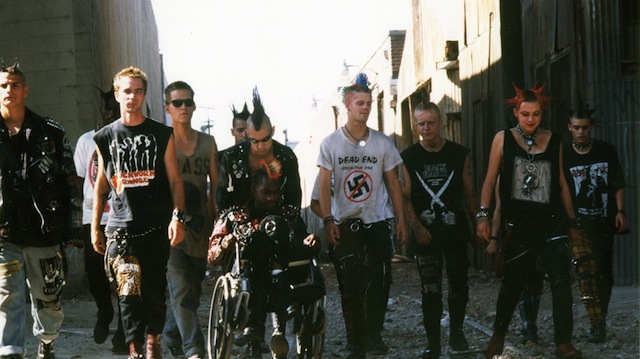 Part III, coming after Spheeris’ foray into mainstream filmmaking, directing the likes of Wayne’s World, Black Sheep, and The Little Rascals, is easily the heaviest of the trio. Starting out framed like the previous two films, as an exploration of a particular rock and roll subculture in Los Angeles, essentially checking in with the spiritual descendants of the original Decline, it quickly eschews the musical trappings, choosing instead to focus on the homeless young kids, the gutterpunks, who dwell on the streets and squats of Southern California.

Decline III presents these kids sympathetically—and they are just that, for all the hard exteriors and posturing, that protective layer is quick to melt away in front of Spheeris’ cameras, and you’re reminded that these are just fucking kids, battered as they may be. They’re skeptical of the camera, of anything that resembles the society they either ran away or were forcibly ejected from—as much as you can see their affection for Spheeris, there’s always a distance, she is always the other.

But as prickly as they are, all charged hair, spike-covered leather jackets, and a layers of filth many wear with a sense of pride, they still find joy and love with their friends, even as they recount horrific home lives, systematic abuse, and fighting white supremacists with the nonchalant resignation of the everyday. At least temporarily they can occasionally find happiness in a few beers, the noise of a punk rock show, and a collection of people gathered at the one apartment they have between them.

There is no future in mind for anyone here. In Decline 2, when Spheeris poses the question of “where will you be in five or ten years” to her eye liner-wearing, big hair-sporting wanna-be rock gods, the answer is, across the board, that they will be rich and famous and rock stars all. In Decline 3, the answer is almost universally dead. At best, they think they’ll be exactly where they are now, homeless, broke, spanging for money to buy beer, waiting to die. 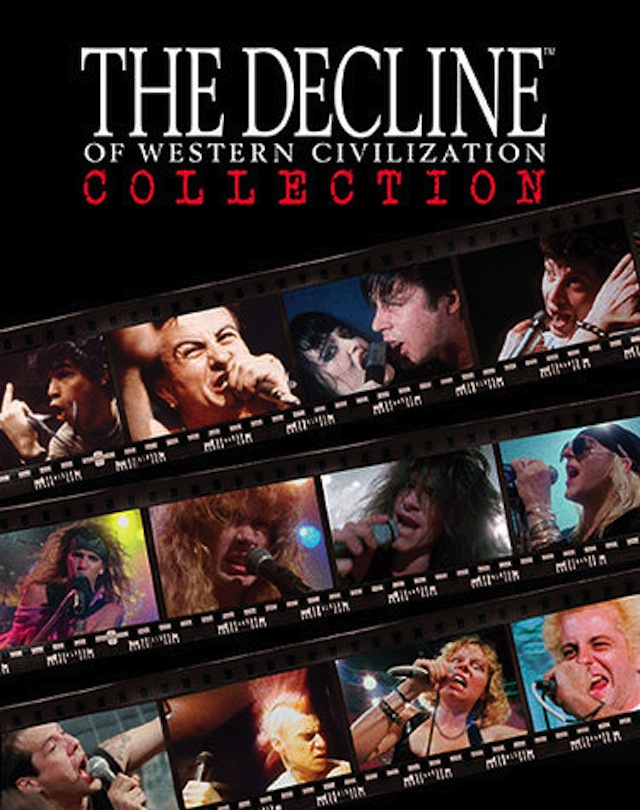 Shout! Factory has a rep for putting out comprehensive and well thought out packages, and this Decline of Western Civilization box set is no exception. Each movie got a shiny new 2K upgrade, so they look, well, as good as these movies will ever look. They’re not particularly high def, then again, the grittiness and grime are a part of the overall aesthetic, so you wouldn’t want them to get too dressed up.

Each disc has its own collection of bonus features. Part I includes never-before-seen footage, new interviews, and even performances that didn’t make the original cut. There’s also a commentary track from Spheeris, as well as additional commentary from Foo Fighters and Nirvana’s Dave Grohl. The Metal Years includes in in depth interview with Spheeris, footage and interviews you haven’t seen before, and a commentary with the director and Nadir D’Priest, singer for the band London, who figure prominently in the film. Part III arrives with additional interviews with the kids, some behind-the-scenes footage, and a longer version of the conversation with Red Hot Chili Peppers’ bass player Flea.

In addition to the movie specific extras, there’s another disc of additional goodies to paw through, including material from all three films. There are extended interviews with some of the players, panels on the chapters in the trilogy, and various other features that explore the cultural impact of the Decline saga. There’s also a 30-plus page booklet that features stills from all three movies, as well as an extended essay from Riot on the Sunset Strip author Domenic Priore.

All in all, this is a fantastic box set, well worth picking up if you’re a devotee of the films and want to really dig into them, or if you’re just a fan of left-of-center music documentaries. I do wish where was a little more about Part III. It was such a passion project for Spheeris, and she was, by all accounts, so moved by the plight and situation of these kids that it would be fascinating to hear her take on the film now, as it approaches the 20-year mark. Still, even without that, this is well worth your time and attention. [Grade A]