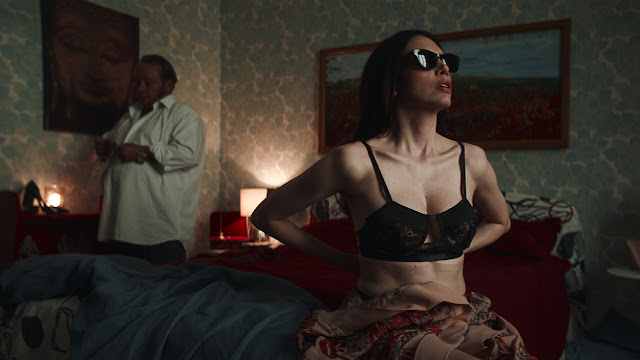 With Dark Glasses, his first film since 2012’s Dracula 3D, horror legend Dario Argento wants to remind you that, even at 81, he can still make a Dario Argento movie. Most, or at least many of his cinematic trademarks are present and accounted for. We’ve got striking colors, an unseen killer terrorizing young women, and a Goblin-esque score that could be lifted from one of the director’s late-70s/early-80s works, among other touches. While it doesn’t reach the highs of his more iconic films, it’s quick and efficient, fits solidly in his wheelhouse, and certainly rates higher than much of his recent output.

After being stalked and blinded by a killer targeting prostitutes, Diana (Ilenia Pastorelli), along with a young boy named Chin (Andrea Zhang) whose parents were killed in the same accident, find themselves hunted by a vicious madman. That’s it, that’s the plot. Once things get rolling, Dark Glasses is simple, barebones Argento, punctuated by odd flourishes, moments of stark violence, and enough blood to satiate fans. It’s easy to tag this as a “return to form,” and maybe it is, but it’s really a horror master doing what he does best with solid results. [Grade: B-]

Check out all of our Fantasia 2022 coverage here.

Posted by Brent McKnight at 9:15 AM