Kids in small towns spend a lot of time wishing for something, anything to happen. In Nyla Innuksuk’s feature directorial debut, the sci-fi horror Slash/Back, a group of friends get their wish in the form of an alien invasion on the longest day of the year. When  extraterrestrial interlopers show up in the remote, barely-sub-arctic Inuit village of Pangnirtung, it’s up to Maika (Tasiana Shirley) and her pals Jesse (Alexis Wolfe), Uki (Nalajoss Ellsworth), and Leena (Chelsea Prusky) to save the day. And the visitors definitely learn that “nobody fucks with the girls from Pang.”

Innuksuk, who also co-wrote the script with Ryan Cavan, tips her hat to John Carpenter’s The Thing in various ways, overtly referencing it as well as borrowing stylistic and thematic elements. The creatures inhabit the skins of their victims, animals like polar bears and eventually people, including the town constables; and in the isolated village, there’s no help coming and the heroes must survive by their own wit and bravery. It also shares more than a little DNA with The Goonies and its ilk of ‘80s, kids-must-save-the-day adventures. 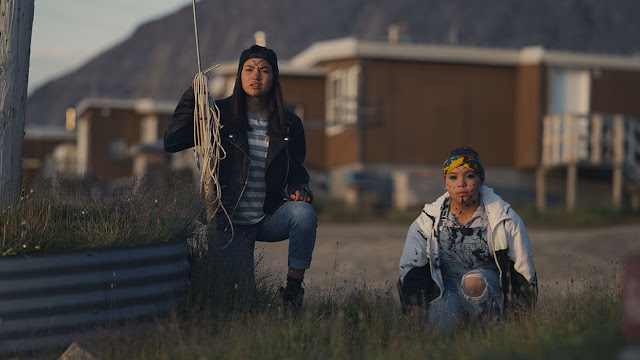 But while there may be familiar beats, all of this filters through a distinctly Indigenous lens. Inuit culture and heritage infuse not only the place and the characters, but how they respond to this external threat and the very tools and skills they use to defend themselves. Innuksuk has said she wanted to tell the kind of story she never saw growing up, that she wished she had. Slash/Back offers an all-too-rare perspective that breathes a freshness and energy into the narrative.

At times, the script and pacing are a bit uneven, though there’s a vitality and propulsive momentum that push things forward. Utilizing mostly inexperienced young actors—the main quartet, as well as most of the supporting players, are all first-timers—leads to a few stilted line deliveries and clunky moments. Though nothing stands out terribly amidst the rough, lo-fi creature feature surroundings. Very much a first feature, there’s nevertheless a ton of excitement and potential. 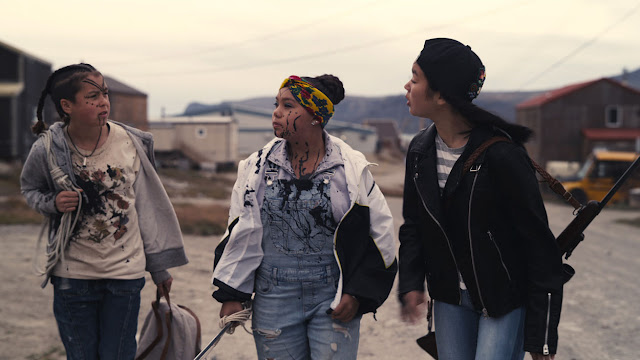 Even with those exposed bristles, what Slash/Back does best is capture an authentic, genuine dynamic and friendship between the main quartet. Maika hates it in Pang and can’t wait to get out, while Uki loves Pang life and can’t imagine why anyone would want to leave. Petty jealousies and resentments linger under the surface, like Jesse’s crush has eyes for Maika, and Leena’s plentiful cell phone data indicates simmering class clashes within the groups. Small touches—parent troubles, butthurt pride, minor rivalries, and more—not only ground the characters, but create a lived in feeling. This kind of conflict and friction naturally pops up and plays out in long-term friend groups who know each other so well, maybe too well, and despite strife and strain, they’re still besties. At the same time the girls are cocky and self-assured they’re also shit-scared kids. And the juxtaposition of their brash confidence with the oh-crap-what-did-we-get-ourselves-into realization moments later, again rings true and real.

Budget constraints limit what the film can do with the monsters themselves, but the inhabited wildlife moving across the tundra in unnatural, herky jerky motions is unsettling. With the possessed humans, Innuksuk steers into it using cheap masks that resemble uncanny nightmare melted faces. (It does look remarkably like an alien being wearing a human skin suit.) The sparse, sporadic use of these creature effects, by necessity, forces the film to stay with the characters, their reactions and responses, which ultimately carries more emotional weight and investment. Limitations breed inventiveness and the result is stronger for it. 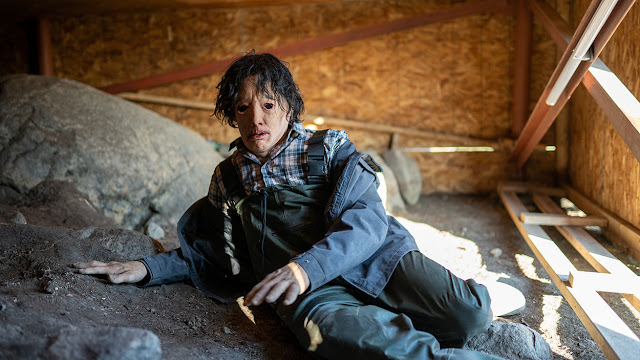 Rooted in a culture, people, and place—while so many horror movies end as the sun rises, this one wraps up just as darkness begins to creep in—Slash/Back offers up a thrilling teen adventure with a distinct, singular perspective and infectious energy. Despite a few rough patches, there’s more than enough enthusiasm and passion on display, and Nyla Innuksuk is certainly a filmmaker we should all keep an eye on. [Grade: B]

Posted by Brent McKnight at 9:35 AM