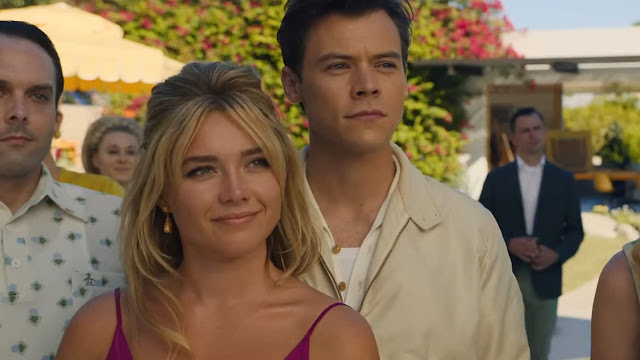 So…I like Don’t Worry Darling, Olivia Wilde’s much-discussed tabloid-fodder sophomore feature, well enough. At its best, this modern iteration of a Stepford Wives-style dystopia is creepy and unsettling in an uncanny valley kind of way, even if it is a bit up its own ass and so, so assured of its own importance.

As said many places, the narrative of a planned 1950s community, where the men all work for the Victory corporation and the wives stay at home doing “wifey” things, unravels in the third act. But while it’s messy and rushed, and doesn’t land at all (or know where it really wants to land, to be honest), it’s a big, wild swing, and it’s easy to admire the ambition, despite the unwieldy result. But though that won’t be for everyone, until that point, the film is a taut, unnerving, something-isn’t-quite-right tale.

Pop sensation Harry Styles has taken a lot of flak, both for his role in the kerfuffle during production (look it up if you’re interested, I’m not going to go into that here), and his performance. And again, he’s not as bad as some make it out to be. His biggest flaw is a near-total lack of charisma or personality on screen, but he’s also not much of an actor at this stage of his career. He’s fine and doing what the script asks on the surface as a horny-for-his-wife company executive, though he has the unenviable task of acting opposite two stellar performances and fades into the background by mere proximity. First and most apparent is Florence Pugh, who plays his wife, Alice, the protagonist, and is on some otherworldly trip here. She’s bonkers good. Then there’s Chris Pine, who, in direct opposition to the former One Direction member, has nothing but screen charisma. The man sweats charm and uses every bit of it here. (He may be a trash human and was fired for being dick, but the originally cast Shia LeBeouf would have, as an actor, been more able to hold his own against those two.)

The whole thing plays something like an extended Twilight Zone episode (maybe I’m dating myself and should say Black Mirror episode). Uneven as the plot may be, mechanically it’s slick, stylish, and meticulously constructed—celebrated cinematographer Matthew Libatique (Josie and the Pussycats) shoots the absolute  hell out of the ultra-conformist Palm Desert. A noteworthy soundtrack full of era-appropriate needle-drops even manages to be spot-on but avoids being too on-the-nose.

With all the behind-the-scenes and on-the-press-tour drama with Don't Worry Darling (there was an appearance where people claimed Styles spit on Pine, among other well-documented incidents), it’ll be curious to see what if any impact that has on Wilde’s professional career. (Dudes can be as temperamental and difficult as they like and still get work, but when a woman does even a fraction of that, people shit their pants they clutch their pearls so hard.) But that’s a whole different thing from the actual movie. As a filmmaker, however, Wilde has a strong, assured vision and I’ll keep watching whatever she does next. [Grade: B]