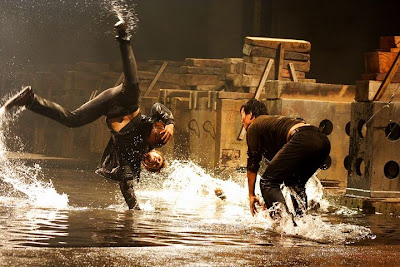 For years now I’ve been staying that what basketball really needs is more spin kicks and flying knees (there are already plenty of elbows involved). Finally, in “Fireball”, I have found a kindred spirit, someone who agrees with me. “Fireball” the film prominently features Fireball the game, which is an underground, hybrid sport controlled by the heads of organized crime in Thailand. Fireball is all the fun of basketball, cage fighting, and Thunderdome, together at last. You can do whatever you can to stop the other team from scoring, things like kicking people in mid air, and tackling the guy with the ball, which is surprisingly similar to the way I played defense in my sportier days.


When Tai (Thai rock star Preeti Barameeanat) unexpectedly gets out of prison, he finds that his twin brother Tan (also Barameeanat) has been beaten into a coma. Like any good brother, Tai sets out on a quest for vengeance, a path that leads him to the seedy underworld of Fireball, where he is mistaken for Tan. It is a pretty standard get-out-of-prison-and-go-looking-for-revenge story, but director Thanakorn Pongsuwan handles it well. He gets to the point, tells you what you need to know, and moves on to the main body of the film without wasting a lot of time.
Through a series of circumstantial reveals you find out that in order to get revenge on the guy who put Tan in a coma, Tai and his team of scrappy underdogs must first get to the finals. This is when the plot wanders away from the vengeance theme and “Fireball” becomes a sports movie. It’s like “The Bad News Bears” or “Major League”, only with significantly more blood and violence, where an unlikely team of lovable misfits comes together to realize their full athletic potential. This is also well-worn territory, but this instance involves more Muay Thai brutality and fewer shenanigans.
Tai is not the only one with problems. Den (Phutharit Prombandal), the team owner, is an upstart in the criminal underworld, and no one respects him. A slumlord is about to evict IQ (Kannut Samerjai), his mother, and little brother from their shanty under a freeway overpass. Muk (Kumpanat Oungsoongnern) is about to have a baby, and moves sides of beef shirtless to pay the rent. Zing (Thai Boxer 9 Million Sam, which is an incredible name) works a soul-sucking job in a Best Buy like tech store. And K (Anuwat Saejao), haunted by the disgrace of throwing a fireball game in the previous season, is looking for redemption. It’s a hard knock life for everyone.
For a while in the middle of “Fireball” the narrative gets too fractured, with everyone’s story given equal time. Lucky for you the stories are interesting enough, and there is ample action to carry the film through this period.
Using a confined space, like a fenced in basketball court, as a stage for the primary action sequences is a good choice here. It compresses and focuses the action, and keeps everyone involved. You can’t wander off if you’re locked in. During the more frenetic moments the camera spins and pans and weaves between the characters, placing you front and center in the battle. My only complaint is that at times there are too many cuts, too many edits, too many thrown fists followed by reaction shots of people pretending they just go punched. This is largely unnecessary. There are enough action shots that aren’t chopped up like this to show that these characters and actors actually know how to fight and make a fight look good. The proliferation of quick jump cuts is a stylistic choice that hurts the film. If Pongsuwan had simply kept the actors in frame and let them go about their business, it would have benefited his film.
There isn’t a whole lot of story in “Fireball”, but that’s not really the point. It’s all about the action, and there is plenty of that to get you over any bumps in the plot. Sure, the premise is ridiculous, bordering on silly, but it is still a fun watch, and it gets extra points from me for including a random street kid in a “Max Headroom” t-shirt.
Posted by Brent McKnight at 1:42 PM