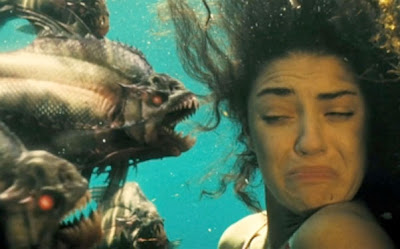 
I’m not a big fan of everything being in 3D these days, I don’t think it is necessary. (I won’t go off on that tangent again. Read this if you really care about my feelings on the third dimension in film.) However, director Alexandre Aja makes the best possible use of the technology available to him. He didn’t make a serious movie with drama and emotions. He made a ridiculous movie, with nudity and entrails, something that should preferably be viewed at midnight while wearing funny little glasses on your face. Being drunk probably wouldn’t hurt things, either.
Here is what matters of the story. It is spring break on Lake Victoria. Elizabeth Shue is Julie, the local no-nonsense sheriff. She is busy so her 17 year old son Jake (Steven R. McQueen) is supposed to babysit his little brother and sister, but instead he takes a job showing around Derrick (Jerry O’Connell), a sleazy producer who makes “Wile Wild Girls” videos (which apparently pissed off the real “Girls Gone Wild” guy), and trying to impress Kelly (Jessica Szohr), a cute girl he has a crush on.
Also, there was an earthquake that opened up an ancient lake within the lake. I’m not entirely sure how that works. A team of scientists that includes Novak (Adam Scott) and Paula (Dina Meyer) shows up to explore the rift, and as it turns out, the quake unleashed a swarm of ancient piranha. Local expert Christopher Lloyd, focusing all of his “Back to the Future” madness, informs them that this particular brand of piranha has been extinct for millions of years.
Predictably, all hell breaks loose, and after that the movie is pretty much piranha versus spring break, which already sounds awesome, but it is so much better than I ever dared imagined. It’s 3D booty shaking followed by 3D carnage. Bodies rip in half, limbs are severed, eyeballs pop out, and absurd looking fish snarl underwater and devour every bikini-clad co-ed and visor wearing frat boy they can find.
The filmmakers come up with an impressive array of ways for people to die. Not kidding, they are some really inventive modes of death. When you think about it, it’s actually impressive. A movie like “Piranha 3D”, a movie that is awash in blood and boobs, runs the risk of showing so much of either or both that the audience becomes desensitized. But Aja and screenwriters Pete Goldfinger and Josh Stolberg spend a lot of time figuring out new and interesting ways to expose breasts and gore, and they are largely successful. Up until tonight I never new that I wanted to see a topless girl being towed behind a boat on a parasail get eaten by piranha. But I did. And it was good. How can you go wrong with a wet t-shirt contest in 3D? I don’t think you can. In “Piranha 3D” neither the gratuitous nudity, nor the excessive blood ever gets old.
Watching this cast is like watching the minor league all-star game. Besides the people already mentioned, Ving Rhames plays a deputy, Richard Dreyfuss shows up in the first scene in a tip o’ the cap to “Jaws”, and Eli Roth has a cameo.
Don’t get me wrong, “Piranha 3D” is retarded. It is tactless, absurdly gory, ridiculous in every capacity, and trying to examine the story will just give you a headache reminiscent of when you eat ice cream too fast. Think an Andy Sidaris film like “Hard Ticket to Hawaii” or “Malibu Express” taken to another level and the next dimension. Everything is an excuse to show boobs or blood or mayhem.
Most likely you already know if you are going to see this movie or not. This isn’t the kind of film that breeds a lot of fence sitters. My advice for those of you planning to go see it is to go see it sooner rather than later, it’s worth it. “Piranha 3D” is exactly what it claims to be, campy, bloody, and over the top in every conceivable way. It is also exactly what I wanted it to be, and so much more. I cheered and laughed through the entire movie.
Posted by Brent McKnight at 6:04 PM