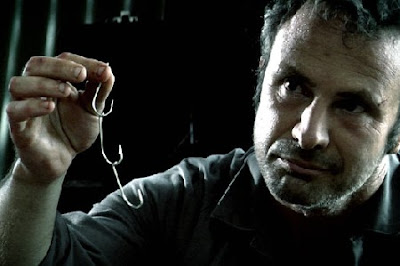 You can tell “The Horseman” is going to be grim from the very first frame, when you see a teenage girl crying in an alley. Images like that don’t generally indicate that happy fun times lie ahead. What is coming is a rugged, badass tale of revenge.


Christian (Peter Marshall) just lived every father’s nightmare, being called to the morgue to identify his daughter’s corpse. He then does what any good father would do in his shoes, he goes on a methodical rampage of vengeance against the men who drugged her, made her star in a porno, and then left her to choke to death on her own vomit.
After that the movie starts to get depressing. Seriously, this shit is not for the faint of heart or those of you with a weak stomach.
Christian is so numb, so broken and empty, that he cuts himself just to feel anything between murders. He is the kind of character Charles Bronson would have played, strong, silent, tough, a normal man unhinged by tragedy that he can’t begin to comprehend. His quest gives him a purpose, a focus, but in reality it is a senseless response to a senseless situation. Killing doesn’t make him feel better, it doesn’t bring his daughter back, it doesn’t add reason or meaning to anything. He does it simply because he doesn’t know what else to do.
Along the way he picks up Alice (Caroline Marohasy), a hitchhiker, and the two form an unlikely bond. She echoes Christian in that she also cuts herself, but she even more closely resembles his daughter. Alice is troubled and alone, and Christian tries to protect her like he failed to do with his own child. It turns out he didn’t really know his daughter at all. He has an idealized vision of her leftover from her childhood, but the more he finds out about her, the more he realizes that he never really knew her. With Alice he sees a chance to correct his mistakes, to atone for his own sins.
Christian’s major discovery moment comes too early, which leaves a lot of time for the story to build into an escalating series of revenge movie tropes that you see coming a mile away. While the film is still awesome after this point, not to mention brutal, his epiphany should have come later, it would have smoothed out some issues with the ending.
The film has an overarching starkness to it. The color scheme is a dampened blue that is so washed out it almost feels black and white at times, and there is a sharp contrast between the light and the shadows that Christian practically jump ropes with. Even the music provides only minimal punctuation, and during the most brutal moments it drops away completely, leaving you alone with the violence.
“The Horseman” is the kind of movie that just when you think there is hope, not even actual hope, just the possibility of there ever being hope again, it is snatched away. The violent scenes are well planned, and well edited. In other hands they could have been gratuitous, but Australian first-time director/writer/producer/editor Steven Kastrissios steers away from that. Christian’s murders can be hard to watch, though the most graphic bits of torture, including an interesting use of a bicycle pump, are left to the imagination. As a result they are somehow more grounded, and all the more horrific.
In the end the reasons behind Christian’s actions are unclear, even to himself. He searches for someone to blame, only to find that everyone, including himself, is guilty and implicit in his daughter’s death. In many ways he is more of a father to a pregnant teen runaway he picks up at a diner than to his own daughter. It is a bleak end to a bleak movie, but one that roughs you up and sticks with you.
Posted by Brent McKnight at 10:15 AM