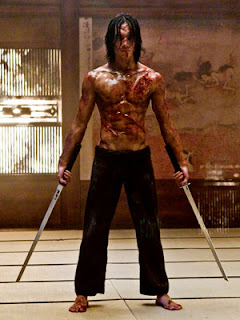 Hollywood is cyclical. This is common knowledge, so you knew ninja movies were going to come around again, it was only a matter of waiting, biding your time. The highest profile film of this new wave is James McTeigue’s energetic “Ninja Assassin”, produced by the Wachowski siblings.


I’m not going to tell you that “Ninja Assassin” is a great movie, because frankly it is not, but it does have some things going for it that make it worth watching. The film has all of the elements I want out of a ninja movie, which is basically a crap load of ninjas and an excessive amount of ninja fights. In this incarnation, apparently every time a ninja does pretty much anything, blood explodes.
Mika Coretti (Naomie Harris) works in European intelligence, and she has a crazy theory that governments have been using ninjas for political assassinations. No one takes her seriously, but of course she turns out to be right. Ninjas have in fact been stealing children and raising them as assassins for hire for centuries. Korean pop star Rain plays Raizo, one of these stolen children cum hired hitman, only he has decided that he no longer wants to be part of the family. That doesn’t go over well with the head of his former clan Ozunu (ninja movie legend Sho Kosugi).
So the clan wants to kill Raizo for abandoning the family, he wants to kill them for being child-thieving murderers, and somehow the sexy lady who does criminal research gets caught up in the mix. So there is another key component of a ninja movie, revenge. There always seems to be revenge involved, and I support that.
Story is not something I consider a necessary part of the ninja experience. If it happens to coincide with the sweet, sweet ninja action, great, but in a pinch I can do without. Luckily the producers of “Ninja Assassin” feel the same way that I do. While some of the fights are overly stylized, full of quick jump cuts and “Matrix” style posturing, and there are ridiculous tracers added to every throwing star (and there are a lot of throwing stars), there is still a lot of fighting. McTeigue doesn’t waste time developing anything, and the film is wall-to-wall action. I’m going to go out on a limb here and say that when you pick up a movie called “Ninja Assassin” you have certain expectations, and plot and character development are not chief among them. There is a scene where a swarm of ninjas run down a busy street fighting and vaulting over crashing cars, which serves as a good illustration of what you’re getting into here.
Also, not all of the fights come across like J-pop music videos, which is a bonus. And regardless of that there are enough severed limbs, bisected torsos, and frantic chase scenes to satisfy. Seeing Sho Kosugi on screen again is pretty awesome, and Rain makes a passable action star. So if you’re looking for some guys with swords dressed in black lurking in the shadows, give “Ninja Assassin” a chance. It is ridiculous and over the top, but it will sate your ninja thirst.
Posted by Brent McKnight at 12:16 PM